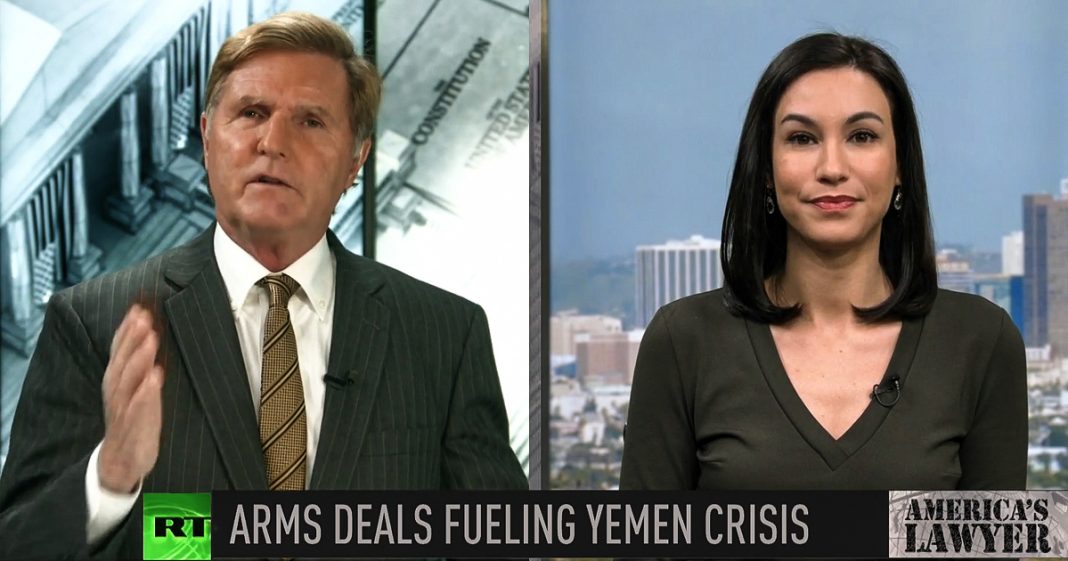 Via America’s Lawyer: Defense secretary General Lloyd Austin is just the latest lobbyist to assume leadership in Washington. RT Correspondent Brigida Santos joins Mike Papantonio to explain how the revolving door keeps turning between politicians and defense contractors, no matter who is POTUS.

Mike Papantonio:             The world’s second largest arms maker is driving US participation in the Saudi led war in Yemen and making it as big as they can. It’s turning into a disaster, a humanitarian crisis. Brigida Santos joins me to talk about this. Brigida, you know, we, we see there’s no, there’s no real surprise here is there. I mean, we see McDonnell Douglas, we see Raytheon, we see all the war pimps. This is like a heyday for them. I, by, by, one aside, I’m always amazed at when Raytheon goes on and they advertise on say, MSNBC or CNN and you think to yourself, well really, am I going to go buy a Patriot missile? What’s that about? And it’s about their influence. And so right now they have huge influence over, unfortunately the last administration and the one before that, and probably this administration. How much of a role does Raytheon play in Washington?

Brigida Santos:                   A huge role. Now, Raytheon executives of course claim that the company does not create US policies, but merely helps carry them out. However, as you just said, the Obama, Trump and now Biden administrations have all placed Raytheon lobbyists in senior roles at the defense department. First, there was William Lynn followed by Mark Esper, and now we’ve got Raytheon board member general Lloyd Austin, as our new secretary of defense. Austin says he’s going to recuse himself from military decisions involving Raytheon for at least four years. Now that is an improvement from Esper’s position on the issue, but will the company still be unfairly favored when it comes to US arms deals? Well, that remains to be seen and it’s incredibly hard to believe that that wouldn’t be the case when Raytheon employees, owners and family members continue donating to individual politicians. In 2019 Raytheon subsidiaries and affiliates reported over $4 million in lobbying expenditures. Some of those to presidential candidates at the time. Now Raytheon’s influence in Washington, also plays out on Wall Street. At times the company’s stock prices have directly correlated with US arms deals, like in 2017 when Raytheon stocks hit record highs, following Trump’s announcement of that $100 billion arms sale to Saudi Arabia. So they’ve got a lot of influence.

Mike Papantonio:             Yeah, I’m, I’m just amazed by this story because here, here we are. Saudi Arabia, we, if we continue, continually build up their weapons possibilities, I mean, year after year. We know that Saudi Arabia at least is as in, is as involved in stirring up terrorism all over the globe is Yemen, as Yemen is. But nevertheless, Yemen is kind of, it’s a low-hanging fruit. Let’s go bomb, let’s go bomb Yemen. Let’s, let’s ignore Saudi Arabia and so it just perpetuates itself. And whether it’s Obama, whether it’s Trump, whether it’s Biden, I don’t care, war is good for Wall Street and that’s what we’re seeing here with Raytheon. How has Raytheon driven US participation up in Yemen?

Brigida Santos:                   Well, Raytheon is a major manufacturer of the weapons that are used in Saudi Arabia’s war in Yemen, largely because of the company’s longstanding ties with members of the Saudi Royal family, many of whom have served as consultants. The company lobbies the US government and of course, as we just mentioned, it has insiders working at the highest level of the defense department. So this is just a business. Saudi Arabia is the world’s largest importer of weapons. Most of them from the United States, because right now, Riyadh does not have its own domestic weapons production industry yet, although it recently announced plans to start one, which is incredibly troubling. The US has helped create the world’s worst humanitarian crisis in Yemen just to keep its business partners happy. But that support is waning due to revelations about the widespread starving and killing of civilians. Washington’s role helping one of the richest countries in the world, kneecap one of the world’s poorest countries is no longer acceptable in the court of public opinion and there are alleged war crimes that have taken place there.

Mike Papantonio:             Oh, it’s nonstop. It’s just headline news all the time. And again, I can’t, I can’t, it’s so troubling that we have this love affair with Saudi Arabia. We know, we, we know what they’re capable of, but nevertheless, Yemen is the small guy. Let’s, let’s attack Yemen and let’s say, gee, that’s where terrorism originates. And it look, no question it does. It is a hotspot for terrorism. But at the same time, it’s all about the weapons industry. It’s all about their stock. There’s no way to dress that up. The new amendment, it’s a new amendment, it aims to reverse the influence of corporations in US policies and elections. What can you tell me about the latest challenge to, to, to Citizens United? What, what’s happening there?

Brigida Santos:                   Sure. Well, lawmakers have re-introduced a bipartisan amendment to overturn the Supreme Court’s ruling in Citizens United versus the federal election commission, which of course that ruling gave corporations and America’s richest people permission to spend unlimited amounts of money influencing elections. But unfortunately this amendment has already been re-introduced every single congressional session since 2013 with no success. Now, if it passes this time and it’s a big if, probably unlikely, it would allow States and the federal government to regulate and limit money spent and raised by candidates in elections and allow States and Congress to differentiate between natural and corporate persons, and then prohibit them from spending money to influence elections. But as I said, it’s a long shot.

Mike Papantonio:             Brigida, it’s dead on arrival. It’s dead on arrival. The Democrats, they love the money. The Republicans love the money, and you’re always going to have the influence of the weapons industry, always driving the train and the argument is, well, gee whiz, they increase our GDP. We put people to work. Yeah, we put people to work, killing people for no good reason. This thing that’s happening in, in Yemen is, is a tragedy, especially when you juxtapose it with what, with what we know about Saudi Arabia and the idea of Saudi Arabia, having the ability to manufacture weapons, if you don’t get how scary that is, you’re not paying attention. Anyway, thanks for joining me, Brigida. I appreciate it.