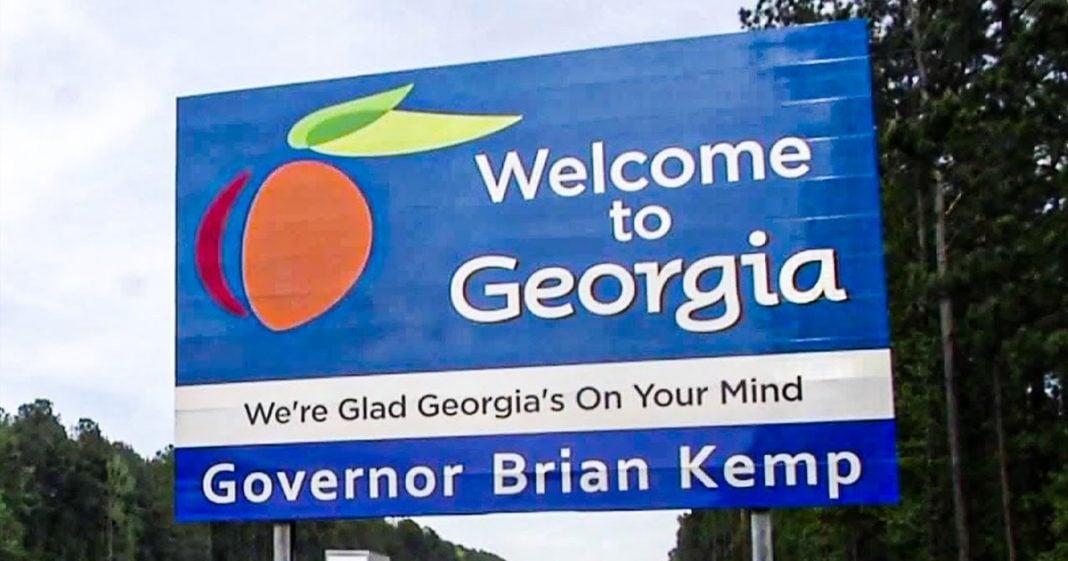 The Republicans who run the state of Georgia are bitter about losing their “red state” status, as well as losing their two Senate seats to Democrats, so they are simply changing the rules to put things “back to normal.” New restrictions on absentee voting are coming down the pipeline, along with other repressive measures that were put in place prior to the Senate runoff in early January. Ring of Fire’s Farron Cousins explains what’s happening.

This is one of those moments where I regretfully get to say, told you so. It’s not a time I’m proud to say it, but it is a time where I’m absolutely going to have to remind everybody that, I told you so. This story is about Republicans, the same Republicans who control the state of Georgia, the same Republicans who Donald Trump and other Republicans across the country have been vilifying for months, are introducing a new slate of rules that is going to make it harder for Democrats to ever win another election in the state. And they’re doing it under the guise of protecting the integrity of our electoral systems here in Georgia, because, you know, all the fraud. All the fraud, that by the way, we just had to investigate multiple different times and we couldn’t find any instances of it, but we think so little of our constituents, we think they’re so brain dead that we’re just going to say there’s fraud and they’re going to go along with it because they’re too stupid to ever look it up.

Hmm. Now that’s the Republican mentality in the state. It’s just the, it’s the Republican mentality all over the country, but it is exceptionally bad down here in the South. Don’t get me wrong. Like we see it here in Florida. We see it in Alabama. We see it in Georgia. They think their Republican base in these States are, are literally just brain dead people who sit there slamming their head in doors all day, that’s the only productive thing they can do. That’s how they treat Republicans in the, I was about to say us, they don’t treat me like that because I ain’t like that. Here’s the thing, we knew this was coming. I’ve talked about this at length over the last few months that they would use Donald Trump’s lies of voter fraud, his ridiculous claims and they would then say, well, I guess we need to do something to curtail voting rights. Huh?

Let’s get rid of absentee voting, which is one of the things they’re trying to do in Georgia and Democrats in the state legislature are saying that Republicans are preparing a whole slate of new legislation going after other things, not just absentee voting. They’re going to cut down on early voting. They’re going to cut down on polling locations. They’re going to do everything they can to have fewer people vote. Why? Because they’re bitter because they’re off. They just lost their two US Senate seats, been held by Republicans, now you’ve got two Democrats. Technically, as of right now, that state Georgia is no longer a red state, it’s a blue state for the next couple of years. Oh, they’re not happy about that. But more importantly, those Republicans in power understand, oh my God, a sea change is happening. People are switching. Demographics are changing. Ideologies are shifting.

We have to preserve our power and the only way we know how to do that is evolve or just not let those people vote. And guess which one they’re going to go with? They’re going to just not let the people vote because that’s a lot easier than evolving your party to survive in modern times. We need to have political Darwinism here in the United States is really what we need because Republicans who continue to refuse to evolve, to fit in, to survive America’s political climate, so they just change the rules. They say, no, we don’t have to evolve. We’re just going to make all the trees shorter so that we can get the fruit off them. But the trees keep growing and eventually they can’t cut them all down to get the fruit off. Adapt or die. And the Republican party is gonna find out pretty dang soon that you can’t just keep on putting off the inevitable. Change comes, whether they want it to or not, no matter how much they fight it, no matter how many laws they pass, you can delay it, sure, but you can never stop it from coming.