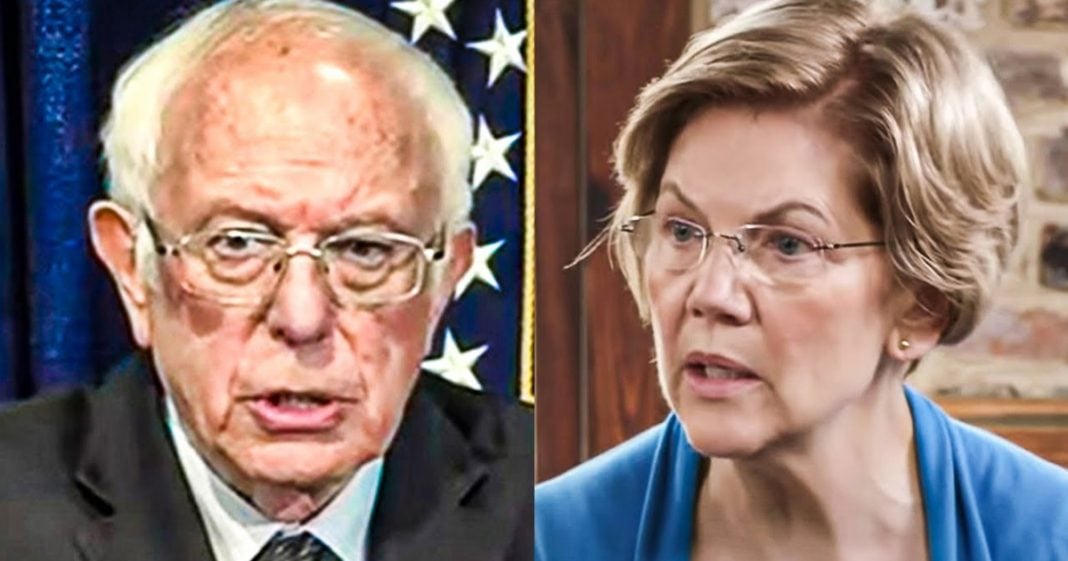 Senators Bernie Sanders and Elizabeth Warren aren’t willing to sit quietly as Republicans try to claim that they have the ultimate authority in the new Senate, and they issued a warning to these Republicans that things are going to be very unpleasant if they block further COVID stimulus bills. This is the kind of hardball that Democrats need to be playing in Washington, and we need more threats of force by the Party if we want to see any progress in this country. Ring of Fire’s Farron Cousins discusses this.

Both Bernie Sanders and Elizabeth Warren, separately recently have issued warnings to Republicans in the US Senate saying if you intend to obstruct any of these COVID relief bills that we’re trying to get out for the American public, if you obstruct these, we can promise you, life’s not going to be very fun for you in the Senate for the next couple of years. Now, Democrats have the majority, but it is the most razor thin margin you could imagine with a 50, 50 split, Kamala Harris as VP being the tie-breaking vote. And that is the only thing that gives Democrats the advantage in the Senate right now. But it’s enough. It’s not enough, but it’s enough to be called a majority.

And Bernie Sanders as the new chair of the Senate budget committee has said that he intends to use his power to its fullest extent. He’s going to use budget reconciliation, he says, a tool that you can only use a couple of times per year on very certain legislation. It is not a magic bullet by any means, but he can do some pretty amazing things to help the public with that tool. Elizabeth Warren, she’s always been a fighter. I know some on the left love to attack her. I’m not in that crowd at all. She’s been disappointing in some areas, sure, but all of them have. I still view Elizabeth Warren as one of the best progressive fighters in the US Senate and nothing’s going to change that unless she decides to go full corporatist and I don’t think that’s ever going to happen.

So Elizabeth Warren is on our side and Elizabeth Warren is fighting very hard. And this warning that they have issued to the Republicans is needed because we have seen in just the last week and a half Mitch McConnell minority leader now wanting to retain some kind of power. So he filibusters the new rules legislation because it actually included a provision to get rid of the filibuster. So he’s filibustering it. They desperately want to hold onto power and Democrats have to be strong. They have to be tough. They have to issue warnings like this and say, oh, hell no, you screwed us over for years and years and years, and years and years, the bill comes due. It’s time to pay the Piper. Y’all lost. We won. Frickin deal with it. In fact, that’s almost paraphrasing what Mitch McConnell said after the 2016 election. You have no power here now.

We’re going to do what we need to do. And what’s crazy about this is Republicans wanted that power so they could do horrible things. Put these conservative justices on courts across the country for lifetime appointments. Democrats like Bernie and Warren, what do they want? They want to send you $2,000 in the middle of a pandemic. They want to make sure that everybody has healthcare. They want to make sure that people have food on the table, that you can get your kids safely to and from school and that we protect the environment, all of these things. Wonderful, good things that actually need to happen. That’s what these Democrats are fighting for. Not all Democrats, but those I’ve mentioned are and Republicans just say, nah, we just want tax cuts, deregulation and pssh, I don’t know, that’s it. Oh, and judges. Tax cuts, deregulations and judges. That’s the only thing they know how to do.

So that’s why we’re at this impasse today. Schumer is acting like he’s going to keep fighting back and that’s great. I hope he does. I have no faith that he will, but if we have other Democrats out there willing to fight, Elizabeth Warren, you know, if Bernie Sanders continues to fight, if you get other people, Markey in there fighting. If Whitehouse comes in, Brown, Sherrod Brown, we can push, we can force, we can have some progress in that Senate. But if Schumer gives all the power away, it is going to be a bad two years, but not for the Republicans.