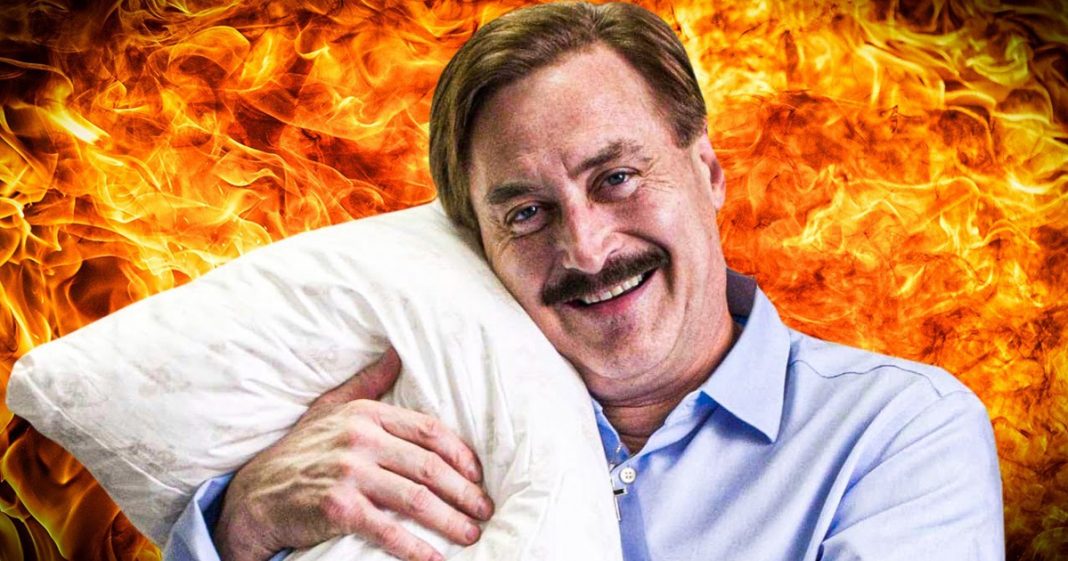 Mike Lindell, the founder and CEO of MyPillow, is finding out very quickly that you can’t be the face of a company if you want to call for overthrowing the federal government. Lindell’s company is now being described by business experts as a “dumpster fire,” as more and more companies pull his products from their shelves. Ring of Fire’s Farron Cousins explains the problems with the company and why Lindell is the only person to blame for all of this.

MyPillow CEO and founder, Mike Lindell, is having a hard go of it right now to put it mildly. Mike Lindell, as we all know, was good friends with Donald Trump. He had cast his lot in with Trump and didn’t pan out very well for his company. Most recently, Lindell was at the White House speaking with Donald Trump, according to the notes, he walked out carrying in his hand, about martial law. Yeah, so the, the pillow guy was actually talking to the president about how to, I guess, overthrow the government. In the months prior to that Lindell had been pushing these bogus conspiracy theories about the election being stolen. That Trump actually won and Biden lost and all this, dude totally went off the deep end. Now, what’s happened since then, is that, well as one business expert put it recently during an interview, MyPillow has become a bit of a dumpster fire, and I know that metaphor gets thrown around a lot these days, but, he says it’s become a dumpster fire because brands across the country are cutting ties with MyPillow.

They’re no longer carrying MyPillow products. You know, if, if stores stopped carrying your product, kind of hard to make a profit off of people just going to your website and ordering your stupid little pillows. And that’s the problem that MyPillow has found themselves in and here’s the thing. It is 100% because of the behavior of their CEO, not the political leanings of their CEO, by the way, there are plenty of companies out there being run by hardcore ultra conservatives that are doing just fine. You know, Georgia Pacific, Domino’s at one point, I don’t know if he’s still the CEO, but the guy who owned the entire Domino’s company wanted to create a religious village in the middle of Florida at one point. We talked about it way in the early days of Ring of Fire. You know, so he was a bit of a right wing fanatic. Founder of Home Depot, huge right-winger. Home Depot is still hugely popular, not going under. People aren’t boycotting it, because there’s a difference, folks.

And this is what Mike Lindell is learning the hard way. Everybody is absolutely entitled to their own political leanings, even if you’re a CEO, you can give your CEO money to a Republican, you can give it to a Democrat. And most people are willing to say, well, I don’t care. I’m still going to go here. I’m going to buy your refrigerator. I’m going to buy your product. I’m going to order your pizza, you know, whatever it is because yeah, you can have your political leanings. You’re not in my face about it and more importantly, you’re not plotting to overthrow the federal government. You didn’t go full crazy, basically is the difference, right? Everybody has their political leanings. That’s okay. What’s not okay, is advocating for the overthrow of the US government. You know, you gotta have a line somewhere and that’s a pretty good line to have. So the MyPillow guy is finding himself, I guess, in a similar situation to Papa John. Now, Papa John was not advocating the overthrow of the US government, but Papa John was caught making some slurs.

And so even though he founded the company, even though the company was named after him, the board of directors still forced him out of the company and moved on without him. And, and they’re doing just fine. They had lost their contract with the NFL because of Papa John’s comments. So they got rid of him. He was toxic for the brand, even though it was his brand. And then of course we all know that he did the interview and said, he’s had like 40 pizzas in 30 days. And then he promised a day of reckoning and it was a little weird, but Mike Lindell is going down that same path. Eventually somebody’s going to come along and have to force him out of his own company. Totally cut ties with him in order for MyPillow to survive. And I bring up the Papa John’s story because that’s proof that it can happen, you know, with a multi-billion dollar corporation here in the United States, that that dude founded. If you’re toxic enough, they’ll find a way to get rid of you and then publicly say we got rid of the problem. Come on back and try us again.