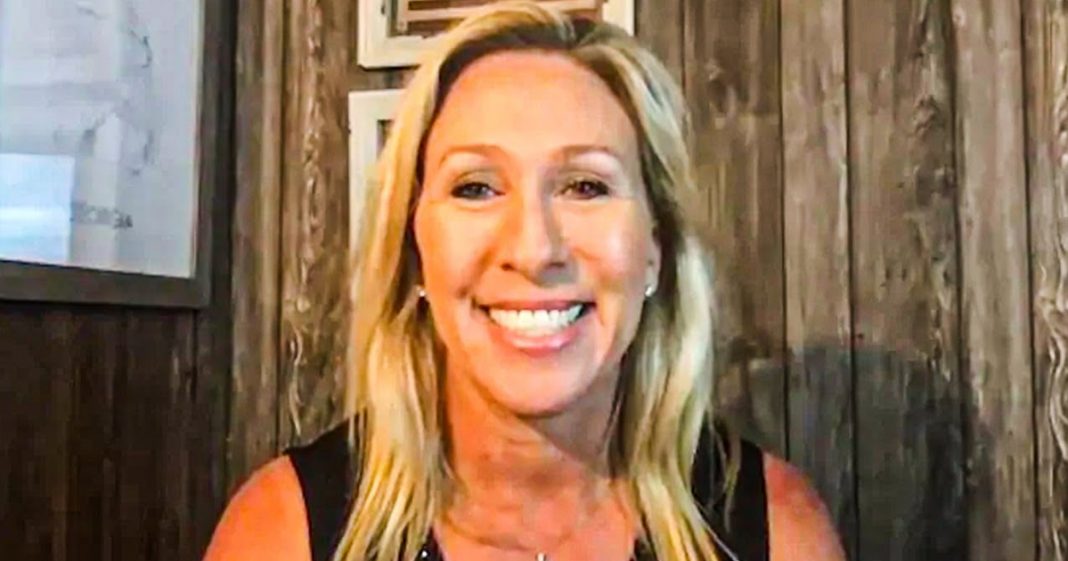 From 2018 to 2019, freshman Republican Representative Marjorie Taylor Greene repeatedly liked posts on social media that called for the murders of prominent Democratic figures in Washington, D.C. This person cannot be trusted in a position of power, and there needs to be a full-scale investigation to find out if she represents a danger to other members of Congress. Ring of Fire’s Farron Cousins discusses this.

Freshmen Republican Congresswoman Marjorie Taylor Greene, the Congresswoman who is a firm believer in the conspiracies that started with the letter of the alphabet. She’s fully into that crap. But according to a report from CNN this week, she is also over the last two years through her social media accounts, Facebook and Twitter, been calling for the death of Democratic leaders in Washington, DC. I’m going to read this straight off CNN’s Kfile, in one post from January 2019, Greene liked a comment that said, quote, a bullet to the head would be quicker, end quote, to remove how speaker Nancy Pelosi. In other posts, Greene liked comments about executing FBI agents who in her eyes were part of the deep state working against Trump. In one Facebook post from April, 2018, Greene wrote conspiratorially about the Iran deal, one of former president Barack Obama’s signature foreign policy achievement, a commenter asked Greene, now, do we get to hang them? Meaning H and O, Hillary and Obama, and Greene replied stage is being set. Players are being put in place. We must be patient. This must be done perfectly or liberal judges would let them off.

So this woman who is now a sitting member of Congress elected by some of the stupidest human beings on the planet, sorry, but if you voted for this woman, there’s nothing up there and I’m not going to make apologies for saying that about you individuals. This woman is disgusting. This woman is a creep and this woman wants people dead for two reasons, one, they’re not in the same political party as her, two, because she’s frigging delusional. That’s not even the worst of the stuff here, folks. There’s a whole big report on all the stuff that has come out of her Twitter and Facebook page over the last couple of years, and her excuse for all of this, oh, well I’ve had different people running my Facebook pages and my Twitter account. You know, who knows? Who knows who it could have been? Really? You, you had people working for you running your social media accounts back when you were, a nobody, huh? Yes. That’s, that’s totally a thing that happens.

My neighbor posts a lot of crazy conspiracy thought, stuff on Facebook. Maybe I should check with him and see if it’s one of his staffers. Oh, wait, no, because normal non-elected officials don’t have people running their social media, you psycho. Folks, this woman needs to be removed from Congress for, for so very many reasons and she needs to have a full on psychological evaluation because there’s something wrong with her. Her actions, her words going all the way back as we’ve seen here from 2018, so three years now, this woman has presented a case history of mental illness. But rather than getting her help, rather than removing her from polite society so she doesn’t hurt somebody, which she has called for doing, instead of doing any of that, Georgia voters said, uh-yup, up to Congress with ya. I don’t know. And I’m sorry if that offends anyone, actually, you know what, I’m not, I’m really not. You gave us this. If it weren’t for those voters who did that, I wouldn’t have to talk about her. I wouldn’t have to waste my time talking about a sitting member of Congress who over the past three years was calling for the execution of other members of Congress. I’m sorry, but that’s not the kind of human being we should be sending to be a representative. That’s the kind of person we should be sending to prison.