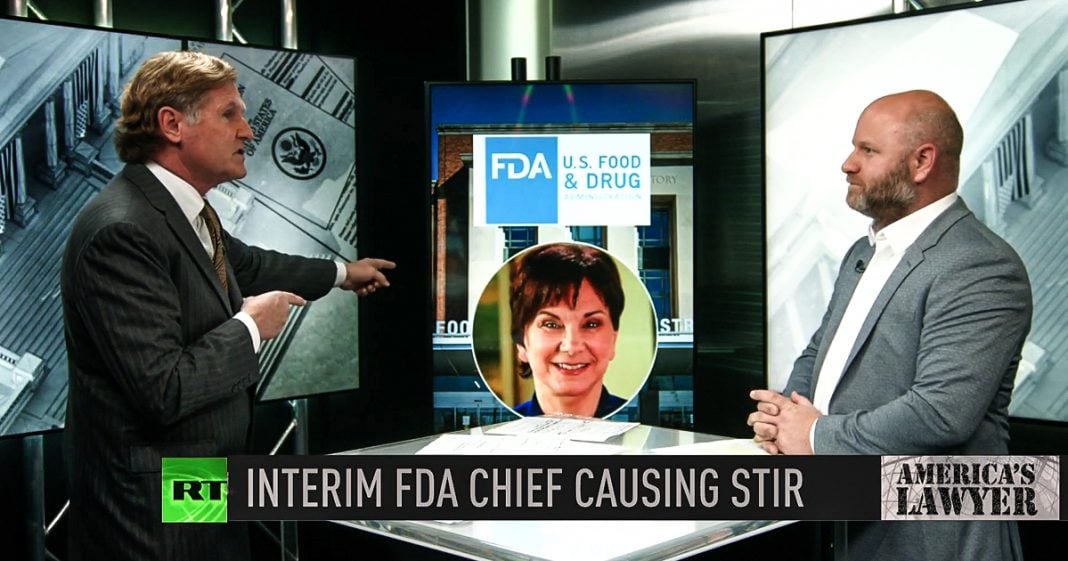 Mike Papantonio:             Dr. Janet Woodcock, oh boy, this is a great story. Well, she’s been placed in charge of the FDA on an interim basis, but she could end up being the permanent pick and that is terrifying. What, it’s like nobody, it’s like, we forgot what she’s, what her history is. Pick it up from there.

Farron Cousins:                  Janet Woodcock has been kind of kicking around in and out of the FDA for, you know, 20 to 30 years at this point. But all the way back in the Obama administration is when she really started to kind of get involved in FDA decision processes on behalf of the big pharmaceutical companies. One of the incidences back in 2011, she testified before Congress and went and said, listen, you’ve passed a law saying we can’t have these financial ties, but oh, now I can’t find anybody willing to serve on committees and I need, I need these people from the drug industry to come in and be a part of the FDA. And she convinced the director of the FB, FDA to go and say the same thing and of course they got their way. Big pharma came back into the FDA during the Obama years because of Janet Woodcock.

Mike Papantonio:             Oh, let me just tell you, there was a prosperous time for pharma during the Obama years and, and you would, you would have thought that Trump would have tapped down on that, but he didn’t. They continued to grow.

Mike Papantonio:             The story I think of is eteplirsen, eteplirsen was a drug that was for muscular dystrophy. Everybody at the FDA said, do not allow this drug on the market. Make sure you do not let, her advisors told her that, her in-house scientists told her that, the people who had studied the drug study said don’t allow it, but she allowed it because she’s in so much love with the pharmaceutical industry, that she was afraid that Sarepta, that was the, that was the company that was manufacturing. She was afraid it was going to adversely affect them financially. So she did what nobody else has ever done. There’s, that her advisors said, there’s no efficacy to this product. It doesn’t work. It’s unnecessary. It’s going to hurt these people even more with muscular dystrophy, don’t do it. And she makes, has private meetings has private meetings with Sarepta. We don’t know what took place in the meetings, but the next thing we know, she’s letting it on the market. This is who Biden wants to head the FDA.

Farron Cousins:                  Right. And again, just to point this out, everybody else in that agency told her, they said, look, Dr. Woodcock, this drug is pointless. It’s useless, it’s dangerous. It’s going to kill people and it doesn’t help anybody. This is a bad drug. We’re not going to do it. And she said, well, I’m going to make you do it anyway. I’m going to go talk to Sarepta. We’re going to make this happen. This drug’s going on the market and that is exactly what happened. And that’s, people have to understand, like that’s a lot of power for her to have, because she was not the head of the FDA by any stretch of the imagination.