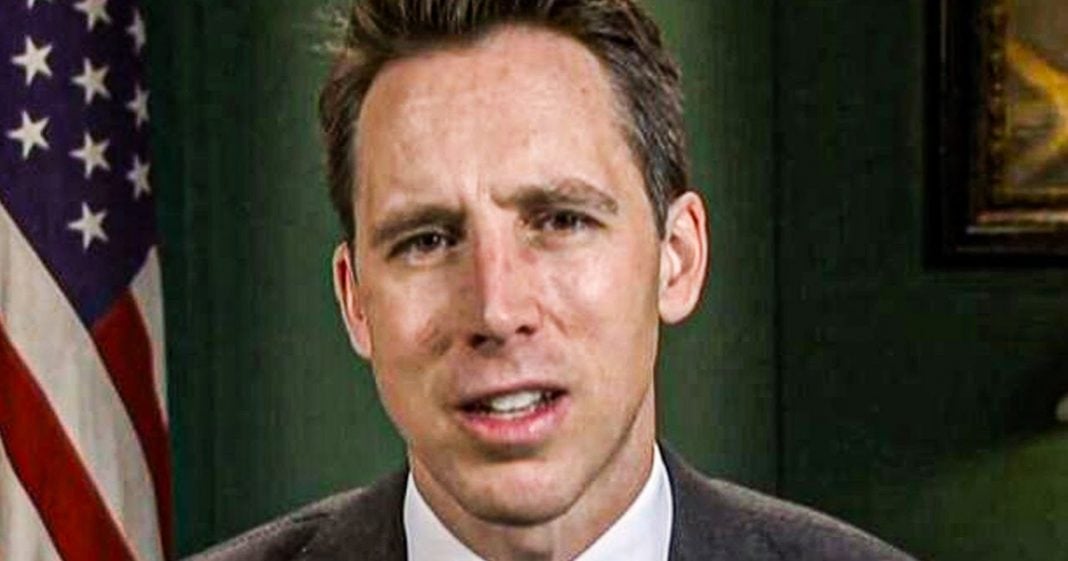 Embattled Republican Senator Josh Hawley now says that he never ever tried to overturn the 2020 election results, even though he is literally on the record with his vote attempting to do exactly that. The thing about Republicans is that they think everyone is an idiot, and Hawley clearly believes that he can convince millions of Americans that reality is actually fake. Ring of Fire’s Farron Cousins explains what’s happening.

In a radio interview on Wednesday, Republican Senator Josh Hawley from Missouri said that he never, never tried to overturn the results of the 2020 election. Where’d you goofballs get that info? He totally never did the thing that he literally voted to do and we all know he voted to do, never happened, according to him. Here’s what he had to say. I never said that the goal was to overturn the election. That was never the point and it was never possible. What we need to have are elections that are fair, free, and open and I think Congress needs to do its job and look into election irregularities. Cool, dude, that’s actually not Congress’s job. And as somebody who works in Congress, you know, you’re an elected official, you’re a Senator, you should know that. That actually isn’t your job. They actually have a special department just for that at the US department of justice, that is their sole function in that one little office, that’s all they do.

All day, every day, every month, every hour, every time they clock in, they’re working on election irregularities. We literally have people for that, Josh. What you did though, was you sat there in the Senate and they said, here are the electoral votes from the electoral college, from the state of Pennsylvania. Do we approve these? And you said, no, I do not, I contest them. The result was that Joe Biden’s the winner. You literally contested whether or not Joe Biden won and then you did the same thing for Arizona. So if you ask me, that’s trying to overturn results from the 2020 election, because you weren’t happy with Pennsylvania. You weren’t happy with Arizona. And then when you had your opportunity, because you had to go to, you know, committee, I guess you would call it deliberations about why these should be rejected, you had nothing. You know what you had actually, you did, you, you brought up the point of you didn’t like that they were allowed to vote by mail.

That made you sad, even though, again, in the constitution, Josh, God bless you’re stupid for a sitting US Senator. But anyway, in the US constitution, I’m giving you a little lesson here, it actually grants each individual state the ability to determine how they’re going to run their own elections. Huh? And we did have a caveat to that, which was the voting rights act of 1965 that said, listen, if you can’t run it in a free and fair way, you know, if you’re doing something that disenfranchises people of color, we are allowed to step in and fix things. Republicans on the Supreme Court gutted most of that just a few years ago, not that that would have actually even changed your objections though, that wouldn’t have validated your objections because there was nothing that actually disenfranchised anyone.

What you were off about Josh was that it enfranchised people, I guess it brought more people in, it didn’t bring any illegal people in. Well, of course, actually I take that back, in Pennsylvania we did have the one Trump supporter who registered two dead women to vote for Trump. So there’s a little bit of fraud for you. Just like in 2016, it’s always just the Trump people. Think about that for a moment, folks, all of the cases of election fraud that we have seen 2016 and 2020, it’s all Trump supporters. Every one of them. That’s remarkable. And I’ve reported on the three from 2016. I think we have also three or four from 2020. So two elections grand total of seven, every one of them for Trump. Wow. Nevertheless, Hawley goes out there, he understands he’s in trouble. He knows people hate him right now.

You know, his objection to the election was supposed to be his grand, you know, here I am America, I’m your guy. And it would have been had it not been for the insurrection that took place on the Capitol earlier that day. But because of that and because Josh Hawley is, you know, seen given them the fist of solidarity, he kind of tanked his career before it ever got off the ground and that’s wonderful. The guy’s a piece of crap. I wish nothing but horribleness on him in far, as far as his political career for the rest of his life. You drop out of politics. Good for you. Have a nice, wonderful, happy life. Nevertheless, he is in trouble. He is trying to remake his image. He’s trying to do damage control, but he’s not even saying the one thing he could say that might salvage what he’s got.

And that is, hey, I was duped just like you. I know now that I was wrong to do this and that my reasoning was based on items that have now turned out to be false. That’s it. Own your mistake, admit to it, of course you’d be lying, but still you do that, maybe you salvage your career. But you don’t, you keep heading down this path where you have to go on local radio shows and lie about what you did, denying basic reality to Americans, yeah, keep doing that and see how far that takes your career.