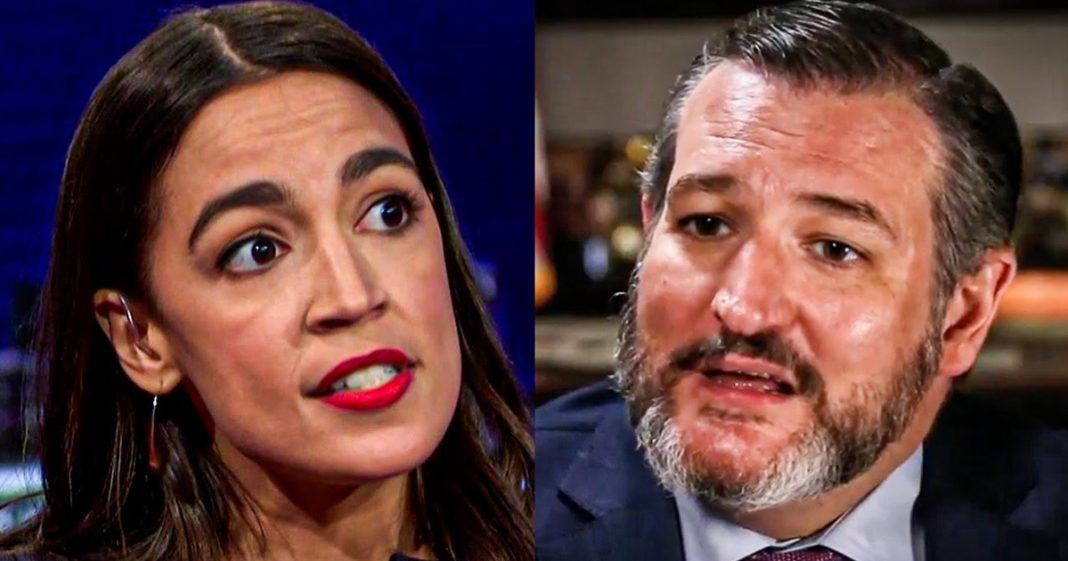 Representative Alexandria Ocasio-Cortez was tweeting about the Robinhood App shutting down Redditors, and Senator Ted Cruz decided to jump in and actually agree with her. But Cruz’s attempt to create some goodwill between the two was immediately shut down after AOC reminded him that he nearly got her killed just three weeks ago. Cruz cannot just pretend that he wasn’t a part of what happened, and AOC was absolutely right to call him out and remind the public of what he did. Ring of Fire’s Farron Cousins discusses this.

By now I’m sure everybody has at least heard something about the wackiness that happened this week with the stock market, the folks from Reddit and the hedge fund managers, it’s been quite a wild week. And now of course, these stock trading apps have turned against the Redditors because the billionaire started crying and so they’ve suspended trading for these people, and they’re only allowing the rich people to play the game. It’s ridiculous. And yesterday, as all, this was unfolding representative Alexandria Ocasio-Cortez took to Twitter and she said, quote, this is unacceptable. We now need to know more about Robinhood app’s decision to block retail investors from purchasing stock while head, hedge funds are freely able to trade the stock as they see fit. As a member of the financial services committee, I’d support a hearing if necessary. She’s a hundred percent right.

She didn’t say anything that is not incorrect and we absolutely need to have a hearing. I’m surprised they’re not already on their way to the Capitol today. We should make it happen. But then after AOC tweets this out Ted, Ted Cruz, Ted Cruz, looking for a little bit of Goodwill because he knows everybody hates him again, comes out. He retweets hers with the little arrow pointing down and he says, fully agree. That’s it. He just has fully agree. He wasn’t being a dick. You know, we’re used to that, but he’s not. he just says, fully agree. AOC, however, understood what Ted Cruz was doing and she retorted and she said this, I am happy to work with Republicans on this issue where there’s common ground, but you almost had me murdered three weeks ago. So you can sit this one out. Happy to work with almost any other GOP that aren’t trying to get me killed. In the meantime, if you want to help, you can resign. She went on to say, you haven’t even apologized for the serious physical and mental harm you contributed to from Capitol police and custodial workers to your own fellow members of Congress.

So she’s and she has every right to be angry because much like her first tweet, nothing she said in these subsequent tweets was untrue. Ted Cruz, by going out there by giving these speeches to people because it’s not just what he said on Twitter about the election, you know, oh, we got to work with the improprieties. We got to figure this out. He was saying this out there in speeches, he would go and talk to crowds. He would get them riled up with this. He helped cause what happened on the Capitol on January 6th, he cannot disown this. He was a part of it. And yes, these individuals wanted to come in. They had enough rounds. How about this? They had enough bullets with them to shoot every member of Congress five times. That’s how many bullets they walked into the Capitol with. Five shots per lawmaker and Ted Cruz also doesn’t have to live with the constant threats that people like AOC and the rest of the members of this squad receive on a daily basis. As we had discussed a year, year and a half ago, their staffs have actually had to go through extra security training, like self-defense type training because of the numerous threats they are all getting on a regular basis.

And Ted Cruz goes out there, throws gasoline on that fire and then comes back on Twitter, like, fully agree. Let’s work together. Let’s be friends, unity. Uh-uh. She’s right, dude, go to hell, like go straight to hell. Resign first and then go to hell. You don’t deserve anybody’s comradery. You don’t deserve anybody’s help. You don’t deserve to have a seat at the table of these conversations when we’re talking about ways to fix America anymore, Ted, you forfeited that when you put the lives of every single member of Congress in jeopardy, you helped do that. And now it’s time for you to pay a price. Resign, I know you won’t. We should expel him, I know they won’t. So it’s up to the voters of Texas. It is 100% up to the voters of Texas to get this man out of office. It’s a big job. It’s all on you. But please send this disgusting piece of crap back home. We don’t want him in DC anymore.