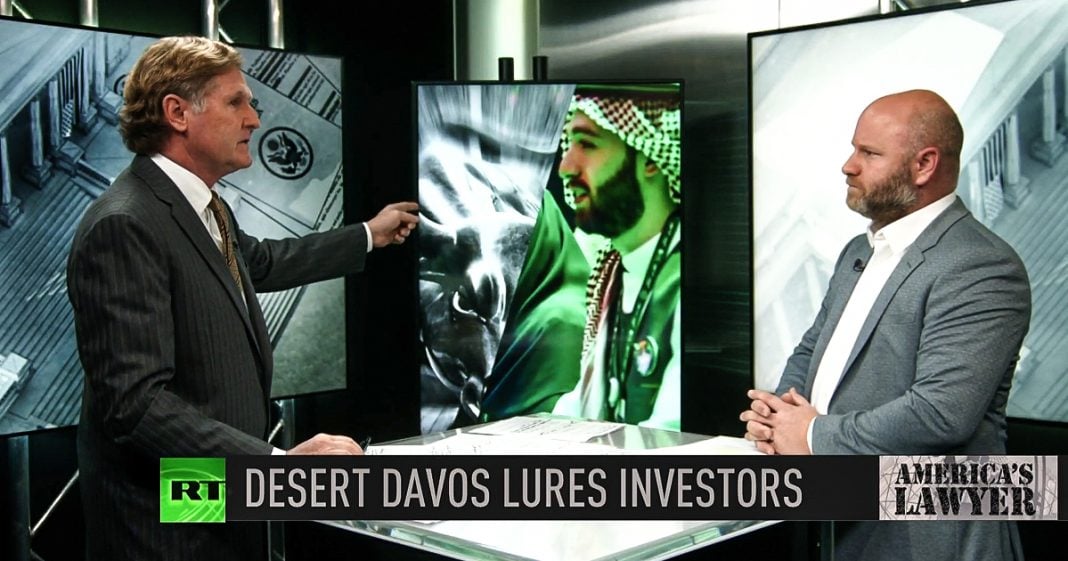 Mike Papantonio:             The so-called Davos in the Desert conference is back after a two year pause and Wall Streeters are gladly signing up to get their grubby little hands on Saudi Arabia’s dirty money. I have Farron Cousins here with me from the trial lawyer magazine. You know, this is a disturbing story on so many levels. I mean, you’ve got, you’ve got David Rubenstein from Carlyle going. We’ve got Thomas Gottstein from the Credit Suisse. You’ve got Larry Fink from Blackrock. You’ve got David Solomon from Goldman Sachs, rushing to the desert to hug these murders. These creeps that would gladly blow Israel and the United States off the map, given the chance, because we are after all the devils, according to them.

Farron Cousins:                  Well, and let’s not forget too, CNN is going to be there. CNN is sending their reporters so they can be the ones on the ground to interview all the Saudi leaders they can get their hands on. They’re going to interview all the Wall Streeters. It’s going to be a big corporate Wall Street and corporate media event is what this is. And what’s really interesting is that this was kind of put on hold for about two years because of Saudi Arabia’s involvement in the killing of Khashoggi. Everybody said, oh, you’re a little too toxic. We don’t want to deal with you right now. But apparently two years is long enough and even though we know the horrible story of what they did to this man, you know, chopped him up into pieces.

Mike Papantonio:             Yeah. New, new movie, The Dissident, The Dissident tells the story about what these Arab freaks did to Khashoggi. And you know what, you know what Hollywood is trying to dampen that, I don’t know if you followed this, Hollywood is trying to make that film go away. You’ve got Saudi Arabia spending tons of money, trying to make this story go away. It is a spectacular film. It was in Sundance, it was in Sundance festival. It was raved about in the Sundance festival and then Saudi Arabia, the Prince M, MB, whatever you call it.

Mike Papantonio:             MBS went to, said, well, we’re going to spend whatever we can to stop this movie and you know, who’s helping them, Hollywood and Wall Street.

Farron Cousins:                  Well, and it’s because it’s all one big, you know, marriage between them all. If there’s money there, we’ll make it happen and that is essentially what these Wall Streeters are saying with this new conference. They’re going there they say because, hey, Saudi Arabia has lots of money. They’re quote, cash rich, and they want to diversify beyond oil. So we’re going to come in, we’re going to take their money. We’re going to invest it for them. We’re going to put it here and there and everywhere and we’re going to get commissions and hey, we know they violate human rights all the time, but come on, we can’t, are we going to cut ties with everybody who violates human rights?

Mike Papantonio:             There is no moral compass, you have zero compass, you have zero concern for the safety of Israel or the safety of the United States via terrorism, because that is the terrorism hotbed. You’ve got the, the point is we know all this and still Wall Street says, oh, well, you know, it’s all passed now. That’s behind us. It hasn’t passed. It’s not behind us. These, these creeps would, would pull off another 9/11 in the drop of a hat if they could. But nevertheless, they have zero concern that for how the Royal family finances terrorism all over the world. Yeah, we’re going to show up. Doesn’t make any difference to us.

Farron Cousins:                  Well, and they’re the ones who know about the financing of it because, you know, we’ve talked about a lot of them have helped move the money around. So they know because they’re involved in it.