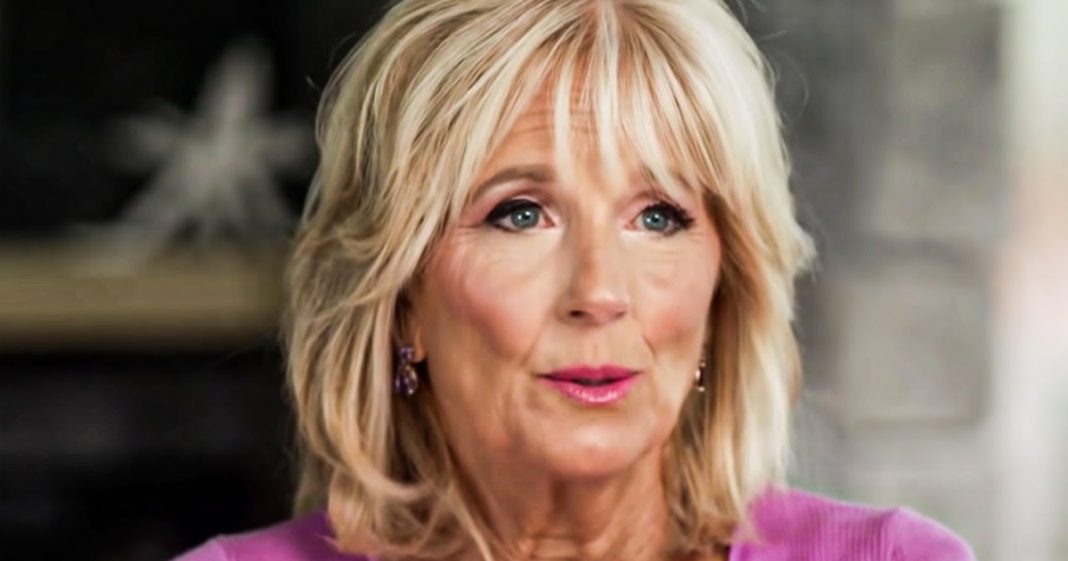 First Lady Jill Biden will be joining the team and providing insight into how best to reunite the families that Donald Trump ordered to be separated at the southern border. This is a sharp contrast to our previous First Lady, Melania Trump, who tried to make a fashion statement with her trip to the border. This is what leadership looks like, but this is just the beginning of what is actually needed, as Ring of Fire’s Farron Cousins explains.

America had forgotten what it was like to actually have a first lady who did something, but already just, what is it, you know, nine days into, into this administration and Dr. Jill Biden has already found a project that she is going to work on. And it’s a great project, possibly one of the better projects we have seen a first lady undertake in, in, in at least my lifetime, maybe, and her project for the time being, and this is not going to be a permanent one, it’s just gonna be a temporary one that she has thrown herself into, is going to be helping to reunite the remaining 611 families that were separated under the family separation policy from the Trump administration. So instead of showing up down there to look at the kids in cages, like you’re in some kind of humanitarian crisis zoo with a jacket that says, I really don’t care, do you? Which is what our previous first lady did.

Dr. Jill Biden says, I’m going to help. I’m going to offer input. I’m going to offer resources. We’re going to put these families back together. And that’s fantastic. Small piece of the puzzle though, let’s be honest, we also have to stop putting kids, we have to stop putting human beings in cages. How about we just say that? You know, because if we say don’t put kids in cages that leaves them to say, okay, well, once you turn 18 hop in the cage, let’s not put human beings in these chain link cages along our Southern borders in these detention facilities for committing, at most, a misdemeanor. You know what we should have instead of spending millions and millions and millions on these detention facilities, we should make small little, little townhouses, little communities, essentially. It would cost the same amount of money except people would be able to come and go. They’d have their little temporary government housing and, you know, yeah, you you’d probably only stay there just a couple of weeks, but it would have beds. You know, a refrigerator, a stove, you could have a commissary on prem. So these people could get what they need. You know, nobody’s going to be living in luxury, but this is just so you can stay together as a family unit while we wait to process your immigration.

It would cost the same amount of money, except I guarantee you, we could actually do that cheaper than we could with these detention facilities. And you treat them like human beings and you give them what they need and you process them the way the immigration system is supposed to work. You keep them together and so we don’t have to go through and separate them. Obama put humans in cages. Trump put humans in cages. Today, there are still humans in cages along that Southern border and it is wonderful, absolutely a breath of fresh air that Dr. Biden is taking on this task of reuniting the families who were separated under Trump’s policy. Because again, he made it policy. Yeah, it happened under Obama. Trump made it official. Don’t ever forget that distinction. It’s not much, but it does matter. Biden can end all of it. Biden can destroy that horrible legacy. He just has to do it and I think the plan I just mentioned, you know, the, the, the small townhouses, you know, it may be a little cramped, but you’re letting people actually live. You’re not locking them away, again, for the crime of a misdemeanor, crossing the US border is a misdemeanor. And 611 people are still trying to find their frigging kids for the crime of committing that misdemeanor. That was Trump’s policy. Dr. Jill Biden is working on it. Let’s hope that president Joe Biden is working on the other issues.