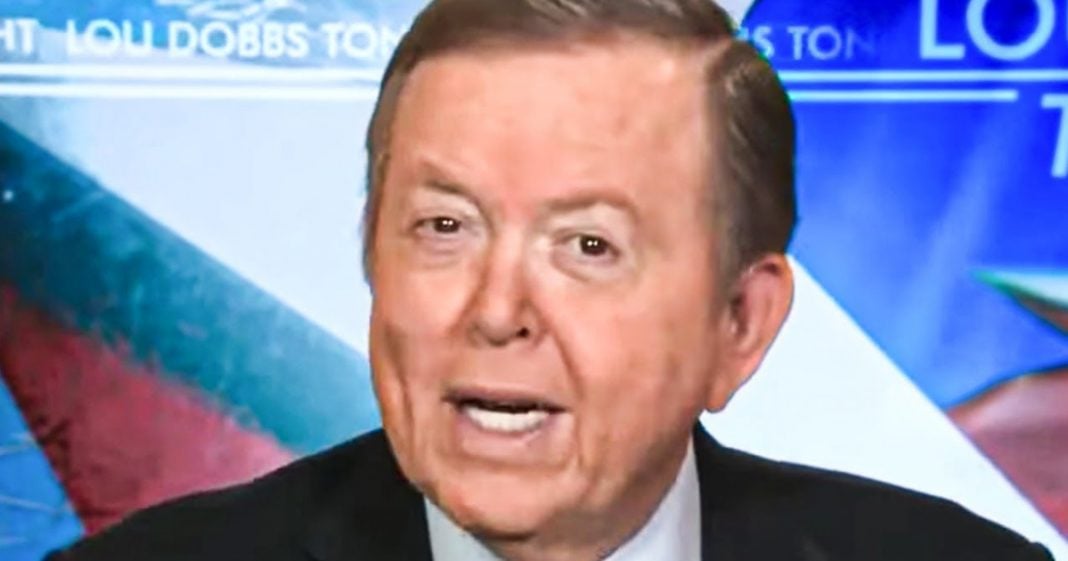 Fox Business host Lou Dobbs believes that he knows why Republicans lost control of the Senate – because they didn’t blindly follow Donald Trump every step of the way. Dobbs believes that putting distance between themselves and Trump hurt Republicans in down-ballot races, but that completely ignores the obvious fact that Trump LOST the general election without distancing himself from himself. Ring of Fire’s Farron Cousins discusses this.

Fox host Lou Dobbs, who is a good personal friend of Donald Trump’s, said this week, that the reason the Republican party got shellacked so badly in the 2020 elections is because they forgot who their true leader was. They strayed away from the sacred word of Trump and the public made them pay. Here’s the exact quote from Mr. Dobbs, who, by the way, as we have discussed over the years, was somebody who would frequently be on speakerphone with Donald Trump during cabinet meetings. So Dobbs knows Trump and Dobbs is loyal to Trump. So Dobbs said on Tuesday, quote, these people have become petty and vindictive and really are not honoring the guy that is the only good thing to happen to the Republican party in the last four cycles. Think about it. They lost in 2008, they lost in 2012, they would have lost in 2016 and they did lose this year because the Republican party forgot who was the true leader. True leader, that, that’s the phrase he uses. He is the true leader.

So we’re just going straight to dear leader section, right? Like we’re just going straight into that dictatorship. Dear leader, Trump can do no wrong. Lou Dobbs wants to have state run media that just talks about how kick Donald Trump is every single day. Is that, is that where we’re at, Lou? Just so we’re clear. Here’s the little, little flaw though in Dobbs’ logic, if you can call it that, Republicans didn’t get shellacked this year. They actually picked up house, seats in the house of representatives. And let’s also not forget the big one, Trump himself lost, you moron. What are you going to, like Trump forgot he was the leader? Did Trump stray too far from Trump, Lou? I mean, your, your logic says that people lost when they didn’t respect Trump. So did Trump not respect himself? You know, is there some self-loathing in there that we didn’t know about and that ultimately cost him the election because the public could see it. The rest of us couldn’t.

I, I don’t know, Lou. Trying to, trying to follow your train of thought here, because the biggest loser of 2020 was Donald Trump. So how do you square that with, oh, they would have won if they would have embraced him. No, because one, they did embrace him, they did, and then he lost, but they won. The public made it clear, Lou, they’re okay with Republicans. They’re not okay with Trump. You hitched your wagon to the wrong horse. In fact, it wasn’t even a horse, it was a, but your wagons on there now, and rather than taking the time to get out and unhook your wagon, you’re just like, well, this is my life now. I have to kiss Donald Trump’s every time I want to do anything. So here we are and here we go, oh boy. The public rejected Trump, the public rejected Trumpism and sure 73 million some odd people voted for Donald Trump, absolutely. A lot of that was just pure tribalism, not Trumpism, tribalism. They voted for that human being because that human being was a Republican. They would have voted for a sheep if the sheep called itself a Republican or had an R shaved in its side. Tribalism is bad for this country, no matter which side it’s on, but that’s what we saw emerge in 2020. But those who, who fully embraced Trumpism, most of them, yeah, they got defeated. Lou Dobbs is wrong, but isn’t he always?