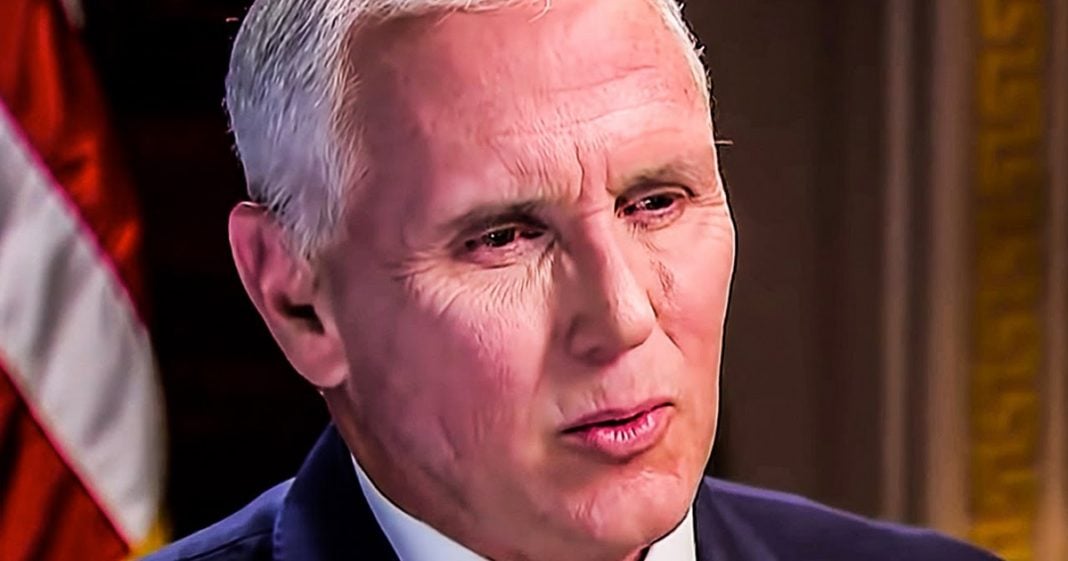 According to a new report, Mike Pence and his wife currently do not have a permanent residence, and they are having to spend each evening sleeping on couches at various friends’ houses. Mike Pence, if the reports are to be believed, is effectively homeless due to his poor choices in the final months of the administration. Ring of Fire’s Farron Cousins explains why this happened and why Pence has no one to blame but himself for it.

In keeping with the adage, that if you try to work with Trump, he will end up humiliating you, a new report has come out from Business Insider saying that Mike Pence, the former vice president and his wife are now effectively homeless and they’re having to spend each night on the couch of a friend in Indiana. In fact, they’re kind of bouncing around, the report says, different friends in Indiana, sleeping on their couches at night and no, no real place to go because they don’t have a home. Now do not for even the slightest little bit of second, think that you need to have any kind of sympathy for Mike Pence and his wife, Karen, you don’t. In fact, this story is not about how sad it is for them or how Trump screwed them over. No, no, no. This story is about mocking them relentlessly because that’s what these two horrible individuals deserve.

In fact, the only thing sad about this story is that they actually do have friends willing to take them in. I would much rather see them have to go spend a couple nights on the cold streets of Indiana. Maybe wake themselves up to the reality that too many Americans have to face each and every day. But the fact of the matter is that Mike Pence is in this situation now because he put all of his stock in Donald Trump. He saw that the Trump administration was warning staffers that you can’t look for new jobs. You know, you can’t look for new places to live. You cannot do anything that would indicate that you know Donald Trump lost the 2020 election. You have to maintain this facade that he didn’t lose, that the election was stolen and that we’re just going to keep on going and we’re not going to leave office.

So one, other reports out yesterday as well, said, a lot of staffers are unemployed, which is unfortunate for them. And then of course the big one here, Mike Pence is homeless because he didn’t, didn’t bother to find a place to live either because he didn’t want to upset Trump or because he actually believed Trump. Either way, this man made a horrible decision to trust a con man and now he doesn’t have a place to live. I’m sorry, bud. Here’s the thing, Mike Pence has money. You know, you get paid a pretty decent salary being a Senator and a vice president, which Pence has been obviously for many years now, involved in the federal government. He’s made good money. He has money to go find a place. So why is he even sleeping on couches? I mean, he could have literally just said, hey Karen, look, hey, uh, Mother, sorry, that’s what he calls her.

You know, uh, since we didn’t have a place to live, we can either crash at, you know, Bongo’s house here, my old frat buddy, ha ha, or stay in a hotel couple weeks, you know, it’s your call, whatever you want to do. Um, you know, there’s obviously only one right answer, but sure. Like you had the money to go rent a condo, rent a hotel, something other than sleeping on people’s couches, but you deserve the couch and honestly, I hope it’s not even a pull-out couch. I hope it’s just you and Karen having to get like uncomfortably close to each other and you got the heat on because it’s cold outside. So you’re a little clammy and, yeah, that’s what you deserve. And sure, it’s petty of me to say that. But Mike Pence has been a horrible petty individual who has used his religion to try to oppress people here in the United States and if you do that, I am not going to have any sympathy for you having to sleep on a couch for a couple of nights.