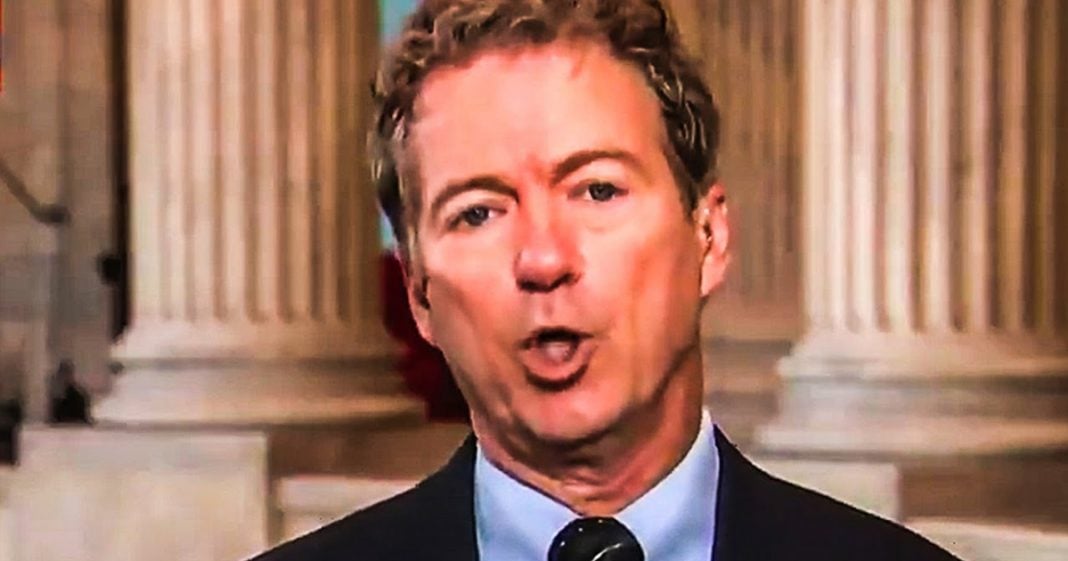 Republican Senator Rand Paul attempted to stop the impeachment trial from even happening yesterday, but his move and his petty speech were complete failures. Nevertheless, the outcome of the impeachment trial is already crystal clear, as the numbers do now show two-thirds of the members willing to convict Donald Trump. Even hitting 50 members at this point seems like a longshot, as Ring of Fire’s Farron Cousins explains.

Yesterday, a group of Republican senators led by Rand Paul, attempted to have Donald Trump’s impeachment trial thrown out before it ever even begins because they think it’s unconstitutional to have a trial, an impeachment trial for a guy who’s not even in office anymore. How silly would that be? Rand Paul told us, he told us the Democrats were trying to use Trump as a distraction because God forbid, if they didn’t have that, they’d actually have to legislate. Rand Paul’s speech, by the way, if you haven’t seen it, I tweeted it out with a comment mentioning that this was a, basically a case study in projection. That’s all Rand Paul did in his absolutely insane speech, is the only way to describe it, it was nothing but projection. Everything he’s accusing the Democrats of doing is exactly what Republicans have been doing for years. So Rand Paul just gave everyone in the world a lesson on what projection really is.

So anyway, he puts forward this thing, we’re trying to say impeachment is unconstitutional. It fails, but the failure of it, the vote that made it fail also revealed that impeachment itself is going to fail. We are not going to get a conviction of Donald Trump. The measure was tabled 55 to 45, 45 Republicans said, yeah, let’s go ahead and say that this impeachment is unconstitutional, only five voted with the Democrats and if you remember your math, you got to have a total of 17 Republicans voting with the Democrats in order to have the conviction and the ban from running from office again. Running for office again, not running from office. So again, this tells us the trial itself is basically effectively dead because nobody in that room is going to be an impartial juror. Every one of them has basically already made up their minds.

You know, unless there’s some kind of new secret, shocking evidence that’s going to come out, which I don’t think there were because, there would be because these senators would be bragging about it saying, ooh, look what we got. Anything short of that though, nobody’s minds are gonna change. And what’s even scarier though, is that it seems like, you know, two weeks ago it actually seemed like you might have some Republicans that go along with it. But now it’s seeming like those Republicans are kind of turning tail. You may still get Mitt Romney, but now you’re actually more likely to lose more Democrats, who will vote against impeachment. Manchin and Sinema obviously, but even this morning reports started coming out, Tim Kaine, Tim Kaine says, hey, we should, uh, we should not impeach instead we should censure.

Censuring does nothing by the way. Just so everybody understands. If you get censured, do you know how that affects your life? Do you know what you have to do differently from that point forward? Yeah, nothing. It’s just in the record that you did something people didn’t like. Oh, Jesus Christ, I would think all of us in our personal lives have probably been censured one or two times. It’s in somebody’s record that you did something they didn’t like and it means nothing. It truly means nothing. But the Democrats are losing support from the Senate. You step outside that building though, and this is what’s hopeful, they’ve got the majority of the country at their back. So the Senate may be voting to acquit, but the public isn’t going to just be hunky dory with that happening. So that’s the only silver lining here. Republicans are going to win the battle, but they may just end, lose the war in the process.