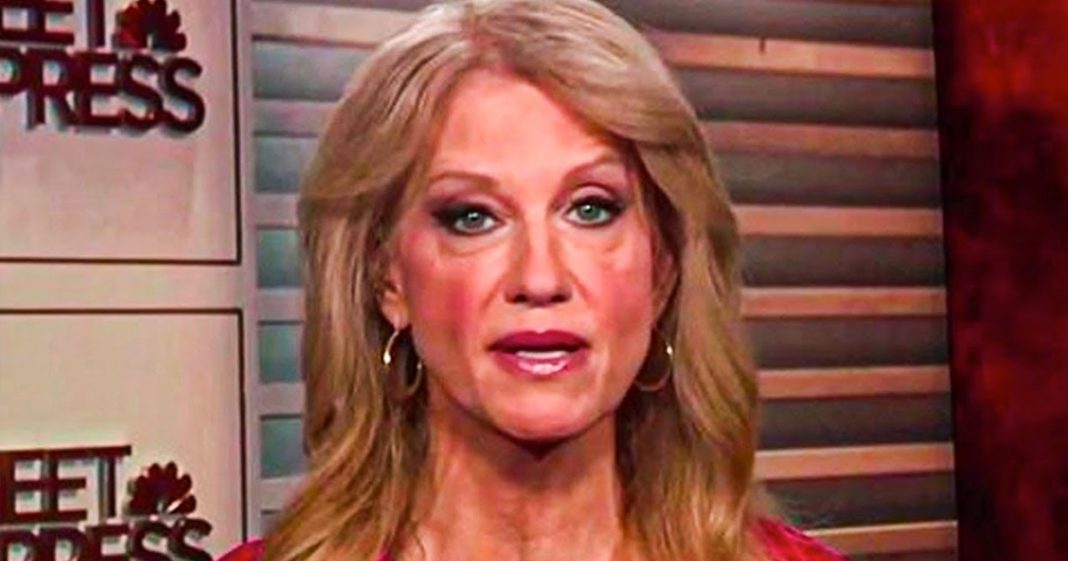 Police in New Jersey said that they have opened up an investigation into Kellyanne Conway after an inappropriate picture of her daughter was posted to social media from Kellyanne’s account. The drama unfolding is one of a family in crisis, and the rulers of the Conway household apparently feel more compelled to rant about politics than to fix what’s happening under their own roof. Ring of Fire’s Farron Cousins discusses this.

Kellyanne Conway is reportedly now under investigation by the police in Alpine, New Jersey, after she posted on Twitter earlier this week, a topless photo of her 16 year old daughter, Claudia. A lot to unpack here, so let’s just kind of start with the photo itself. It was posted earlier this week as a fleet, which is Twitter’s version of the little Instagram type stories, only stays up there for 24 hours. But once it was brought to her attention, it was deleted from Kellyanne Conway’s account and yes, it was posted from Kellyanne Conway’s actual verified Twitter account. Claudia Conway came out and said, it’s likely a photo that her mother took off of her phone during one of the times when I guess her mother had gone through her phone. And so she probably, according to Claudia, either posted it by accident or she was hacked and somebody posted it.

That to me actually opens up another line of questioning. Like, if you’re a parent and you go on your kid’s phone and you see that they have risqué photos, you don’t transfer them to your device. Um, you, you, you get rid of them. Transferring them to somebody else’s device, even if it’s your own, just increases the likelihood of stupid things happening, like what happened with this topless photo of Claudia. So that’s a major red flag for me. Like I don’t, I don’t think as stupid as Kellyanne Conway might be, I honestly don’t think that that is something she would do. So that’s weird right off the bat. Not long ago, Claudia actually posted a video to her TikTok, um, that she said had been compiled over many, many years of her mother, kind of verbally berating her, you know, at one point saying you’re lucky I’m pro-life, calling her very vulgar and profane names.

So the, the feud that’s been taking place with this family, has been very public, but all of this is, is very sad to be honest. We have hated on Kellyanne Conway obviously for four straight years and she deserves it for her politics. We’re out of the realm of politics here and to be honest, both Kellyanne and George might want to consider leaving the realm of US politics for a little bit to get their family in order. I know George is off having fun with the Lincoln Project and, oh, this is such a great thing. You know, people forget all the horrible stuff we did because now we hate the same people and then Kellyanne is doing, God knows what. But you know what? Maybe it’s time to focus on your family a little bit because clearly you’ve got some issues there.

Clearly something’s up with Claudia. She is unhappy and based on the videos that she’s posted about, you know, the way she’s been treated, kind of hard to blame her for not being happy. But at the same time, her outlet for all of this is not healthy at all. So this family needs some very serious psychological help. They need counseling, they need therapy, they need something to happen and of course, you’ve got to get to the bottom of why in the hell Kellyanne Conway had a topless photo of her under-aged daughter on her phone to begin with and how that ended up posted on Twitter. That’s what this investigation is going to find out and then beyond that, it’s time to usher that whole family right into therapy to figure out what in the hell is going on and if there’s anything there that might still be salvageable.