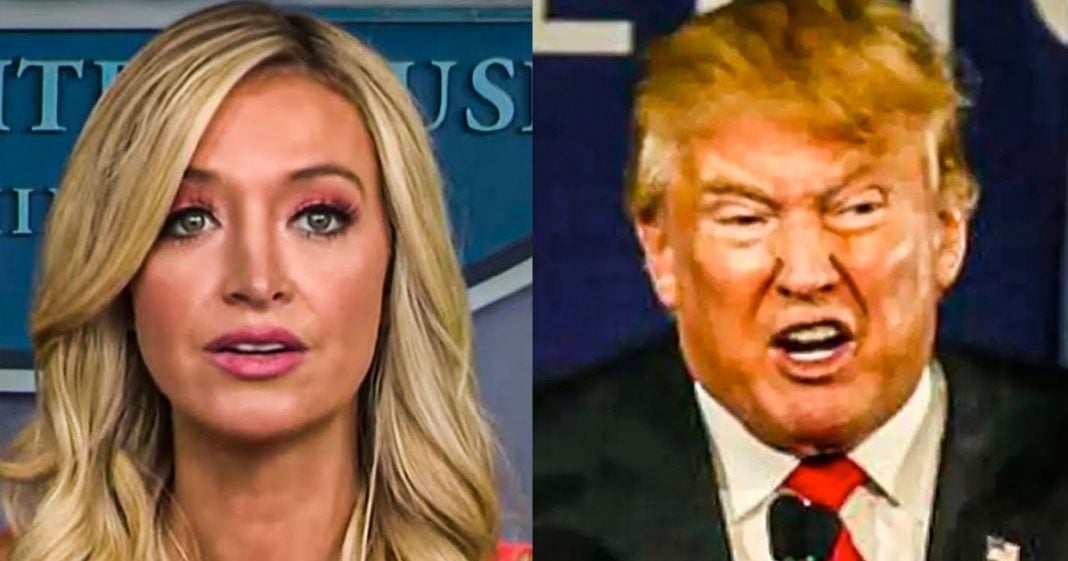 Former White House press secretary Kayleigh McEnany has taken a job at Fox News, a move that surprises absolutely no one. But the timing of her move is what is a little heartbreaking for Donald Trump, because she apparently had already signed her contracts before the administration came to an end – while she was still spouting lies about the election being contested. She knew she was lying to the public, she just didn’t care. She’ll fit right in at Fox, as Ring of Fire’s Farron Cousins explains.

In Donald Trump’s orbit loyalty really has only ever been one way. As soon as Donald Trump doesn’t need you anymore, no matter how loyal you have been to him, he will kick you to the curb and so we have seen countless people in Trump’s orbit be un, just unwavering in their loyalty to Donald Trump. Rudy Giuliani is a great example. Guys ruined his whole career by throwing in his lot with Trump, didn’t get rewarded with a pardon. So now he’s kind of screwed, got hit with a $1.3 billion lawsuit two days ago. But sometimes the loyalty isn’t as there as we’d like to think it is, case in point Kayleigh McEnany, Donald Trump’s former press secretary, his final press secretary, who has spent the last two months out there telling us that the election was rigged. She told media outlets that she had the evidence. Tucker Carlson reached out to her personally asking for the big evidence that she swore she had, just like the healthcare plan she said she had in that totally not blank page book.

Well, it turns out all this was a farce because Kellyanne, excuse me, Kayleigh McEnany hard to tell the wackos apart at times, Kayleigh McEnany was out there telling us that the election was not over, but behind the scenes, she knew it was over because she had already signed a contract, according to her own financial disclosure forms, with Fox news. Those financial disclosure forms were just revealed to the public by citizens for responsibility and ethics in Washington and so it appears she betrayed Trump because Trump didn’t want any of his staffers to find other jobs during the run of the administration. He, he didn’t think it was over, he didn’t think he needed another job. You got a job. What are you doing? They even said, if you see anybody filling out online applications or doing any of that, report them so we can handle with them.

Well, apparently Kayleigh McEnany was exempt from that, or she’s super good at being sneaky enough to be able to meet behind closed doors with Fox news executives, sign this wonderful contract that she disclosed on her financial disclosure forms, that Fox news now says never happened. See that’s the twist of this story. She went behind Trump’s back, she signed this contract, she put it in her financial disclosure forms, which you know, it’s pretty severe penalty if you lie on those things. And then Fox news came out yesterday and said, nope, not, nope. She’s not an employee here. Never happened. We do not have a contract with her. Nope. None of this story is true. So somebody is lying, who could it be? Well, Kayleigh McEnany used to lie professionally for a living, but then again, that’s what Fox news has done since day one.

When you have two groups, McEnany on one side, Fox news on the other, who’ve done nothing but lie for their entire adult lives or careers, yeah, kind of hard to sort out who has the, who has the truth and who doesn’t. But you know what, let’s look at it logically, right? What incentive does Kel, Kayleigh McEnany sorry, Kayleigh McEnany, what incentive does she have to lie on her financial disclosure forms saying that she got a job at Fox news? She knows that Donald Trump didn’t want her looking for a job. She knows that Donald Trump hates Fox news now. And she knows that these financial disclosure forms typically aren’t made public. So if she had no job, she would just put that on there and nobody would have said a thing about it. So she really had no reason to lie. Now I’m not saying that doesn’t mean she didn’t lie, she’s had plenty of reasons to not lie in the past, she still lies.

Fox news, on the other hand, they want to smooth things over, you know, they don’t want to be a part of Trump world all the way, but they still need that Trump base for their ratings, which are tanking, which is wonderful. So they’re trying to play like, no, no, no, we’re totally not doing that. I think Fox is lying about not hiring her, but time will tell. I mean, if you’ve hired her, if you’ve given her a contract, that’s not something you can hide forever. You know, you can’t just put a fake name on, on screen and, you know, slap a wig and a fake mustache on her and think we’re not going to know who she is. Right? You’re going to get found out. And if you’re trying to terminate a contract before it even begins, cool, you’re still gonna end up having to pay her. So Fox news, you better be telling the truth because if you’re not, this is going to be very embarrassing for you in just a couple of weeks.