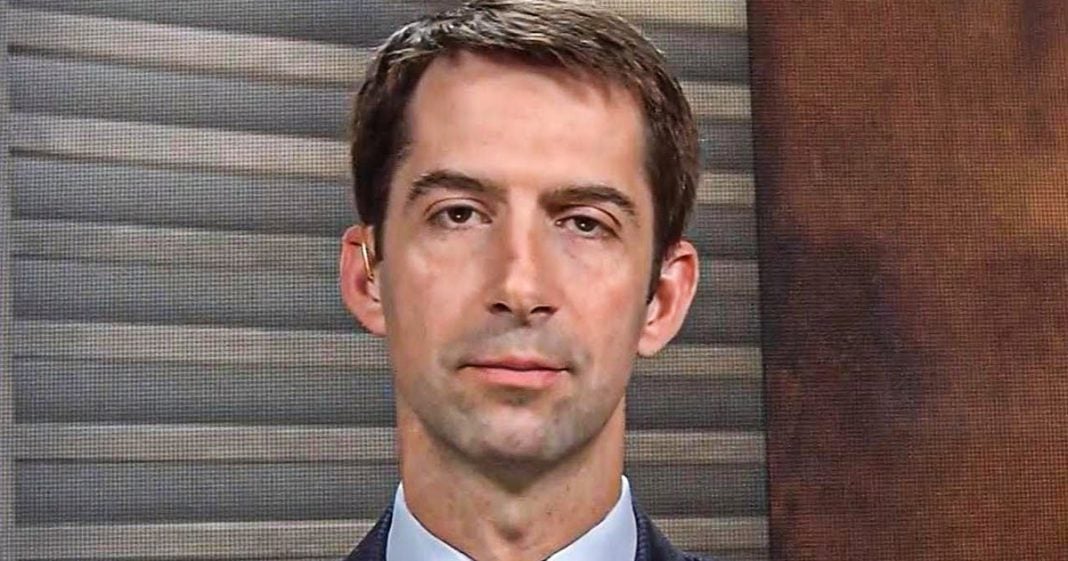 According to new reports, it appears that Republican Senator Tom Cotton has been lying about his military service. Cotton has repeatedly claimed that he served with the Army Rangers in the Middle East, but he actually never served with them during his time in the military. Instead, he attended a Ranger course and earned a Ranger Tab, but that’s about it. Ring of Fire’s Farron Cousins explains what this could mean for Cotton’s future.

Republican Senator Tom Cotton, according to a new report from salon.com, may have been lying about his military service for nearly a decade. Here’s what’s happening, according to this report, Tom Cotton has repeatedly claimed that he served with the Army Rangers while serving with the US military overseas in the Middle East in Iraq and Afghanistan. Now Cotton, as we all know, is a veteran. He did serve in Iraq and Afghanistan, but he was never a member of the Army Rangers. That is what is described as an elite fighting unit, right? I mean, those are like the big guys you see in the movies and stuff, doing the cool, crazy things that help recruit people into the military. Very difficult to become an Army Ranger, but what’s not difficult and is actually offered to every single member of the military is Ranger school. And if you complete Ranger school, which does not make you an Army Ranger, but you complete Ranger school, it’s a couple of weeks course, you’ll get a little Ranger tab you can wear on your uniform.

And the report says, that’s what Tom Cotton did. He took this class, this course, got his little Ranger tab. But then, he repeatedly in interviews and ads referred to himself as a member of the Army Rangers and claimed to have served with the Rangers in the Middle East, in the war on terror and that part’s not true at all. That never ever happened. So why does this matter, right? Republicans lying, sure, okay. Yeah, that happens every day, right? Well, here’s the thing, Tom Cotton, as we all know, has bigger goals than just sitting in the US Senate for 20 or 30 years. Tom Cotton, his name has repeatedly been floated as somebody who is considering a 2024 presidential bid. Lying about military service, it’s a pretty, pretty damaging thing. After all John Kerry was accused of lying about his military service and that helped to tank his campaign.

It turns out he wasn’t lying. Nah, the lies were the lie. Then of course, you know, Brian Williams, NBC, lied about, you know, being in those war zones and he got canned. For some reason they brought him back, but for politicians, it’s, it’s a little, little, little more complicated than that. If in fact Cotton has been lying about his military service, that is something that his Republican opponents up on a debate stage are sure as hell going to point out and that’s not going to sit well with the American public. That’s not going to sit well with members of the military, that is in fact probably going to them off that he lied about where he served with who. So Cotton’s got a big problem. Maybe not as big as Hawley and Cruz have at the moment, but Cotton also, yeah, this is kind of a big deal in the world of Republican politics.

Especially at a time like this, you give your opponents any little thing to get you on, especially lying about military service, whoa, they’re going to have some fun with that. So Tom Cotton, you better, you better button this up real quick, man. You better figure out your talking points on it and explain to the people why you’ve been lying for almost 10 years, about who you actually served with, because these are things by the way that are easily verifiable. And if you can’t prove that you definitely misspoke and you meant to say this, you can go ahead and kiss the White House good bye.