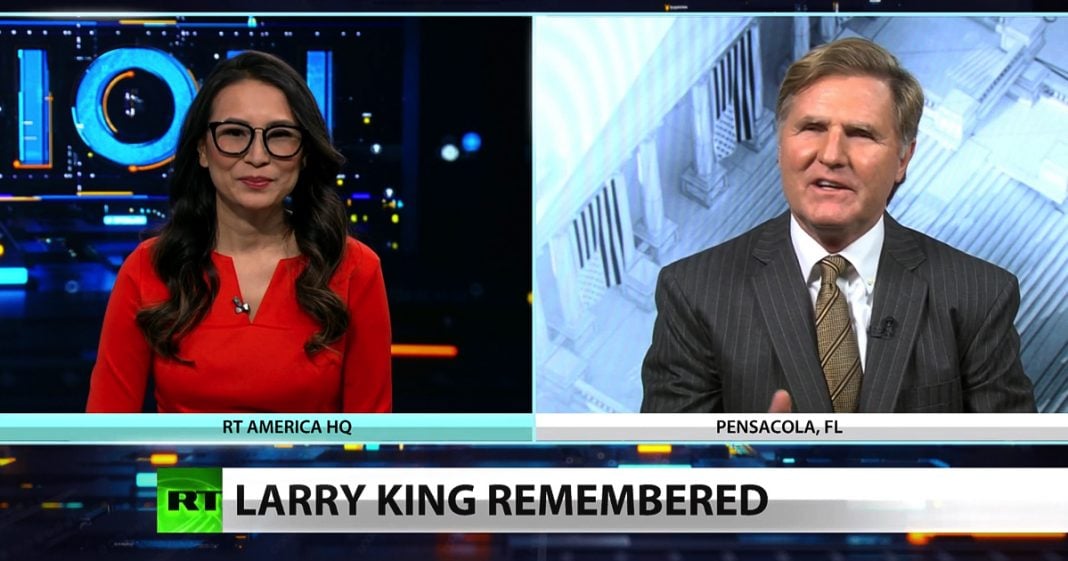 Via In Question: The late Larry King explains it in his own words in a preview of an exclusive interview with RT America Host Rick Sanchez. Then, Host of America’s Lawyer Mike Papantonio reflects on his memory of the broadcast icon.

Now, I’m going to get to his motivation and I learned this a long time ago, nobody thinks they’re bad. Hitler didn’t get up in the morning, comb his hair and say, I am an evil, terrible person. Osama bin Laden had a goal. Now, where it manifests itself, we’re going to learn as we go along in the interview, how he got to be where he is, how he felt about doing this, but I’m going to find out about him and then the event. First him and then the event. If I go to the event first, then I have a tough time learning about him. So I’m curious about people, the, the person, the event comes later. So it was the same, whether it’s a president or Bobby Darin or Rick Sanchez or a camera man, and Studs Terkel told me once, the great Chicago, everybody’s interesting. Everybody’s interesting. You ask good questions, you’ll learn a lot. I remember he said to me once, ah Sinatra, anyone can interview Sinatra. Interview the elevator operator. He’s interesting too.

Manila Chan:                       All right, that’s pretty incredible to hear. So let’s go now to the host of America’s Lawyer here on RT, Mike Papantonio is joining us. So Mike, what was your initial reaction hearing Larry layout his interview philosophy there with Rick Sanchez? I mean, I’m sure you’ve done some cross examinations that sound similar to that.

Mike Papantonio:             Well, the thing he did is he never attempted to guide, to, to force a conversation to a destination. That’s basically what he said. He just, he wanted the guests to take him on the journey and more importantly, he was there to listen. Not to give his tribal opinions about politics or religion, he was there to listen, not to be the journalist that we see today, who has these preconceived notions about the way their suppose, the world’s supposed to be and the way he wants it, or she wants it. He wasn’t tribal. He was there to listen not to give his opinions or tell us what to think. He didn’t demand we think like this, you know, he didn’t, it wasn’t like the American public now turns off a station if you say anything they disagree with, he was just the opposite of that. He allowed us to take in information, inform our own thoughts about it, process it the way we felt comfortable processing it. It was a real art, I have to tell you, it was a real art.

Manila Chan:                       Now, you have been interviewed by, by Larry many times. Did you kind of get this sense, I mean, I don’t know if you want to call it magic, but there was a sense of style that he had that was able to kind of bring details out of people, out of you that maybe you didn’t even know you had or were ready to share.

Mike Papantonio:             Well, to do that, you have to want to learn something. He learned from all of his guests. This, this, Larry King had more depth than a hundred modern journalists. You can’t find them on MSNBC or NBC. They’re not out there anymore. The reason that he, that he engaged so much is he really wanted to learn something. When I would talk to him about the law, he wanted to know, Mike, what are you talking about? Tell me more. That was one of the most impressive things about him and how he would just soak up all of this knowledge from everybody around him and then he’d use it in future interviews. And it gave him depth that most journalists will never have because they don’t even have the basic education. You could talk to him about anything and he’d know. Human, humanities, he knew it. History, he knew it. Science, he knew it. That’s not the case today.

Manila Chan:                       Yeah. I would have to agree. Larry was like a walking encyclopedia. I mean, you could pick his brain about anything for hours. So that said, you’ve kind of touched on it already, Mike, how do you think TV going forward, the landscape is going to be different without Larry around? I mean, he was kind of part of a bygone era that you just touched on, there are no journalists like that anymore.

Mike Papantonio:             Yeah. Well you talk to journalists coming out of school and you ask them, well, what’s your favorite Steinbeck movie? You’re, I mean, book, you’d say, if you’re lucky, if you get Grapes of Wrath, but probably you’re not going to get anything. The media today could learn a lot from Larry King’s work. It isn’t about being the first to get a story or being the loudest, most obnoxious person on TV, it’s about giving the story time to be told. That’s what he did better than anybody. He didn’t go in there with preconceived notions on what had to come out the other end. He wasn’t tribal. He wasn’t, he wasn’t locked into one philosophy of life and he didn’t have to dumb it down for his audience because, you know, he, he just let the story take a course of its own and most journalists are completely unable to do that.

Mike Papantonio:             Oh my, absolutely. He’d be one of the best cross examiners you could ever find because he would, he, his, his, his MO, as you heard him say was to first of all, make that person comfortable. Let, let that person talk to me and that was very much the heart of what made him different. Yeah, that, that’s the key to good cross examination is to start out and you say, look, what common ground do we have? Now, let’s move to the cross examination. So it was a really important talent that Larry King had.

Manila Chan:                       I wonder if anybody’s ever told him that, Mike. Lastly, any final thoughts, any memories of personal memories that you had with Larry that you might want to share with the audience now?

Mike Papantonio:             Yeah, the biggest memory I have was his depth. He would, we would talk about very complex, complex things during interview. He stayed right with it. He understood it. It is that depth of character and knowledge that is missing in the modern journalist. It’s not there because they don’t have the foundation. They don’t have the, they don’t have the basic education about all these things that Larry had in his head. And I would always, always fascinated by his ability to stay with these sometimes very complex ideas. He would hang there. Why? Because he understood them. He wanted to understand them and he worked to understand them.