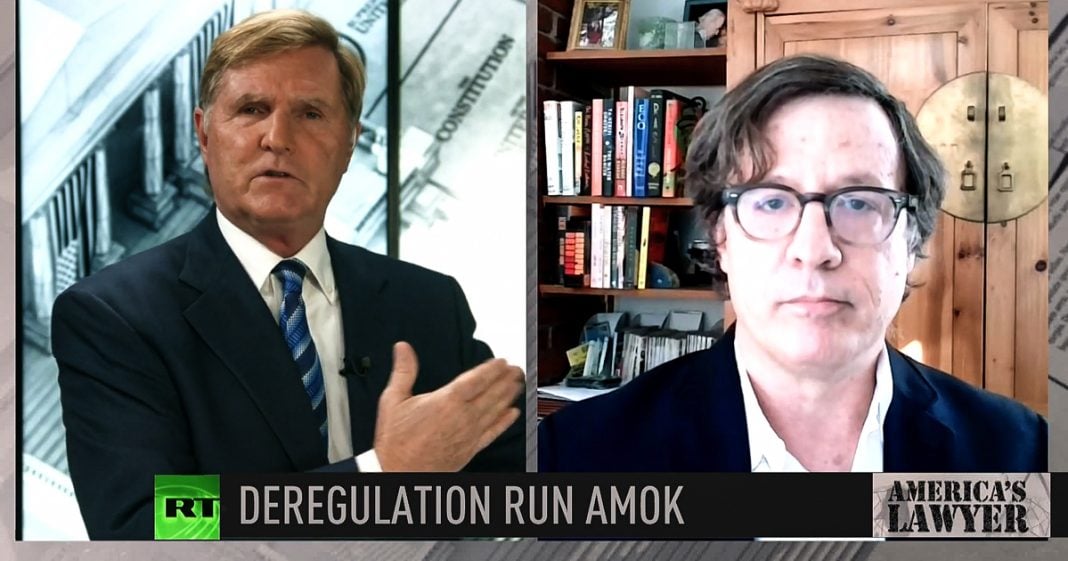 Mike Papantonio:             As the Trump administration’s push for deregulation officially draws to a close, president Biden has tapped a new head of Consumer Protection Financial Bureau, and Executive Director of Public Justice Paul Bland joins me now to talk about it. Paul, with all the appointments I’m seeing right now, it is, it’s, it’s great to see, to see that we’re able to talk about this, that this might have some promise, if we can get rid of this woman who’s in charge of, of that organization. What is your take on what’s happening with the CFPB and what has to happen in order to make it effective again?

Paul Bland:                            Yeah, I think it’s a great question. I mean, the CFPB is really our, or probably one of our most important consumer protection agencies, maybe the most important. You know, it was created in the wake of the 2008 financial crisis as part of the Dodd-Frank bill, it was really Elizabeth Warren’s brainchild. And for the, you know, the first director, Richard Cordray of Ohio really did fantastic work there. In, in his five years as director, he recovered more than $12 billion for consumers who’ve been ripped off by payday lenders, other predatory lenders, and it was, and the agency passed a variety of regulations that were really helpful. Trump put in a woman, Kathy Kraninger, who has just been the, in love with the industry she’s supposed to be regulating and the payday lenders, she’s had regulations to make it much easier for payday lenders.

She’s on their side against consumers. Enforcement dwindled down to where in her four years, she’s only recovered $800 million for consumers and the angency has sort of fallen apart. So I think it’s great. And, you know, so one thing also is that the agency was set up that the president wasn’t supposed to be able to change the director and the banking industry challenged the structure, said is unconstitutional and the Supreme Court agreed with them in a case last year, Seila Law, that was an important case for separation of powers and whatnot. But one of the side effects of it was it made it possible for Joe Biden to fire Trump’s director and replace her with somebody who’s actually going to favor consumers, we hope. The guy Rohit Chopra.

Mike Papantonio:             Okay, Paul. Okay. Yeah. Paul, this, this looks encouraging to me. That’s where I’ll, that’s as far as I’m going to go with this, it looks encouraging and I’m hoping, I’m hoping that Biden will see fit to go ahead and push through the most aggressive folks that he can put in charge of CFPB because Trump set out to destroy that organization. Okay. He set out to underfund it. He set out to put in Mick Mulvaney to put in Kraninger, he put in folks that he knew were going to destroy the viability of this administer of, of what the CFPB is supposed to be doing.

Paul Bland:                            Well, I think it’s, I think this is a particularly hopeful appointment. I mean, there’s some appointments I think, you know, I have concerns about, but I think that, I think this guy is somebody who’s had a good record. You know, he’d been at the agency when it was first formed and he was in charge of some of the work they did on student loans. And he really went after a lot of the student loan, you know, servicing agencies and some of the lenders who are really ripping off students and sort of getting people in this cycle of debt that’s got, you know, millennials are going to be buried under debt for, you know, a lot of their lifetimes and this guy was, was pretty tough on the industry. So I think this is an appointment that, you know, the first symbols are really good. Someone being connected to Elizabeth Warren, having her general view of the world and how you need to be, you know, tough in going after sort of corporate cheaters is, is a, is a, is a really good sign.

I was gonna say, one of the things about the agency is they were given the power under the Dodd-Frank act to go after forced arbitration clauses, which are these things that go into the fine print of contracts and said, if you’re ripped off, you can’t sue the company. You can’t bring a class action. And they had passed a rule that was going to really limit forced arbitration and it got overturned by the Congress under the congressional review act. But they still have the study and the authority that gives them the power to do something about this. They can’t do the exact same thing they did before, but they could do something different and so they might give consumers a lot of ability to stick up for and protect themselves, which would be really important.

Mike Papantonio:             Yeah. Well, I’m pulling for Biden on this. I, I, I’m hoping that he will do the right thing and make this into a viable agency again. Thank you for joining me, Paul.