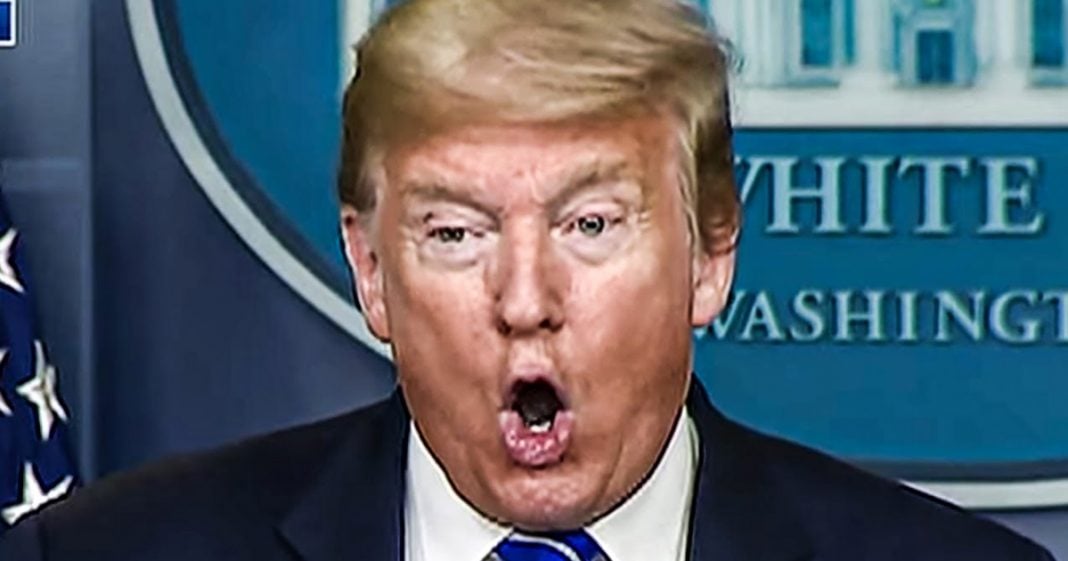 The real reason for Donald Trump wanting to start a 3rd Party in the United States has become crystal clear: He is doing it out of spite. Reports say that Trump is looking to set up a “MAGA Party” or “Patriot Party” with the sole intention of challenging Republicans who voted to impeach him. This plan has absolutely zero chance of being successful, and Ring of Fire’s Farron Cousins explains why that should only make the rest of us support it even more.

Donald Trump is still wanting to create a third party here in the United States. It, as they’ve said before, it could be called the Patriot Party. Now reports are saying it might be just the, the MAGA Party, or maybe that’s just the label they’re calling it right now, but whatever it is, Donald Trump is dead serious about the possibility of starting a third party here in the United States. So the question is why? Well, we know a lot of the reasons we’ve discussed them here. Obviously he wants to be on the forefront. He wants to be the King maker. He wants it to where if you want to win in this country, under the Republican banner, you got to go and kiss his ring. If the Republicans won’t let him do it, he’ll start his own third party. So you have to do it, blah, blah, blah, blah, blah. That’s not the case. As it turns out, according to a recent report by the Washington Post, the real reason Trump wants a third party in this country is purely out of spite and get this it’s not even spite for the entire Republican party, as you may think, because we know Donald Trump and the Republican party aren’t exactly simpatico right now, right?

But he’s not seeking revenge on the entire party. He is only seeking revenge, as the Washington Post reports, on the 10 House Republicans who voted to impeach him. So he is having his staffers at Mar-a-Lago research how to start a third party, what all’s needed, what you gotta do and all this so that they can create the third party with the sole purpose of primarying those 10 Republicans who voted to impeach Donald Trump in the House. And then of course, I imagine by the time they get all that done, we’ll have the Senate trial done and if any of those Republican senators voted to convict him, then you’re probably going to have a MAGA Party challenger in your next election. Mitt Romney, I am clearly talking to you, so be ready for that because it’s coming. This is the most petty thing I think I have ever heard in almost 17 years of talking about and covering and researching American politics.

This is ridiculous. Donald Trump is ridiculous. If you’re one of the people that still takes Trump seriously, if you’re one of the people who thinks that Trump was some kind of great visionary or that he was even a decent president, you’re part of the problem here. You’re living in a fantasy world, a fantasy world being run by a madman, hell bent on revenge. And revenge for what? Like he’s mad these people because they voted to impeach him. Okay, cool. I understand that. They voted to impeach you because the evidence that you helped to incite an insurrection was overwhelming. That, that’s what happened. That’s why they voted that way and if you’re dumb enough to not see that, then you’re exactly the kind of person that Trump would like to have joined the Patriot Party or the MAGA Party or the pure stupid idiot party. He could call it whatever he wants and you morons would still sign up for it and proudly proclaim, I’m a member of the stupid idiot party, a-yuck. You would, you would. Don’t even act like you wouldn’t. You’d have your little bumper stickers, proud member of the dumb asses.

If that’s what he decided to call it, y’all would do it. You’d put it on flags. You’d hang those flags off your pickups. You’d hang them on your boats. You’d put them up in your front yards, not even knowing you’re the butt of the joke because that’s what this whole thing is. It’s a big joke. It may not be meant as a joke, but in the world of politics, this is a joke and it’s not a very funny one. But we can rest easy because the jokes not on us, it’s about, it’s on the people that are stupid enough to believe that Trump’s third party has a chance in hell of succeeding.