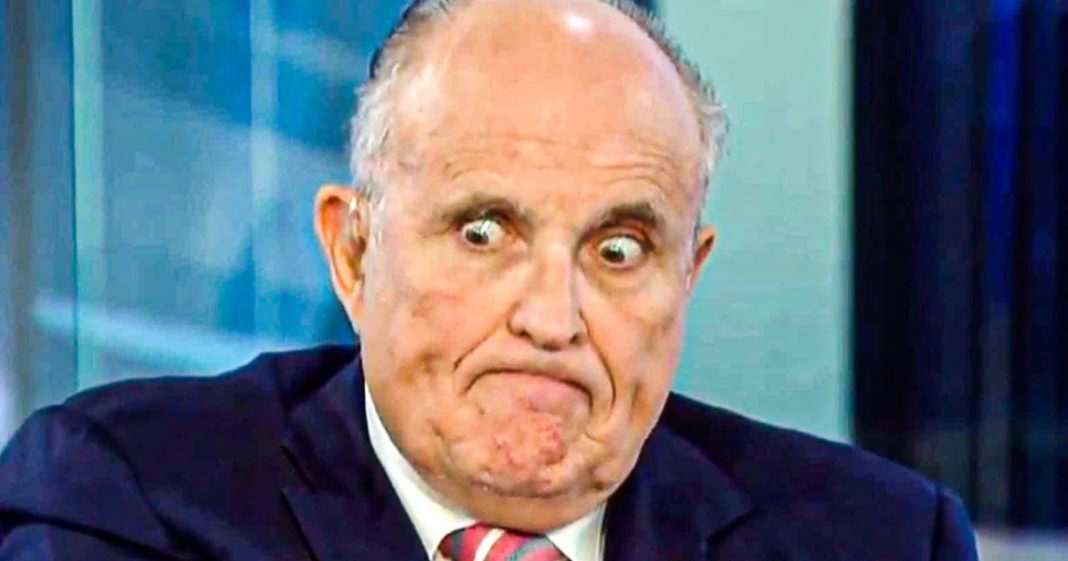 Rudy Giuliani has now been hit with the same caliber of defamation lawsuit as Sidney Powell, as Dominion Voting Systems has filed a $1.3 billion suit against Giuliani for his public lies about the company. Dominion had requested that Giuliani (and many other individuals) stop spreading their baseless lies about the company AND to issue public retractions, and when they refused, they were hit with the lawsuits. Ring of Fire’s Farron Cousins explains what’s happening.

It really is, not to sound like the Joker here, but it’s about sending a message. I can’t even finish that line without laughing, but that’s the whole point of this. They want to send the message that you can not get away with just making crap up about our company and not face some kind of consequence for it. And they want that consequence, the $1.3 billion defamation suit, to make the headlines, to send a warning shot to everyone else that this is what happens. This is what happens when you report stuff that you know is not true. This is what happens when you don’t listen to those cease and desist letters that we sent out. And that’s something we’ve talked about in the, in the past, excuse me. Obviously Dominion sent the cease and desist letters, not just to Giuliani and Powell, but to multiple media organizations, including Newsmax, One America and Fox news. I know Newsmax and Fox news did issue retractions and corrections and say that nothing that they said was true. I do not know if One America did it yet, but if they haven’t, you’re probably going to have a $1.3 billion lawsuit filed against you.

Trump has repeated some of the false claims and I know he has not retracted them. So probably going to have a $1.3 billion defamation suit against him as well, as long as we’re sticking with that number. You know what though, for Trump go big, like make Trump do like $1.5 billion, if you have to. Sure. So what are the claims, right? We talked about the money. We talked about the people targeted. What have they been saying? Well, apparently both Giuliani and Powell have been saying something similar and that is that Dominion Voting Systems is somehow a Venezuelan company run by a couple of Venezuelans who have ties to Hugo Chavez, who has been dead for many, many years. And they flipped votes in Georgia from Trump to Biden, and they then paid off Georgia officials to not say a word about it. You know, all those Republicans in Georgia, they paid them off to let Biden win. What’s happened is that they’ve got Dominion mixed up with another company. Not that there is any company by the way, that did any of those things, but what it is is there is another company, I believe they make software. Excuse me, the name escapes me at the moment. We’ve talked about them before, but I can’t for the life of me remember the name.

Anyway, they were founded by two Venezuelans living in Florida. You know, they had no connection to the Venezuelan government. They just happened to be entrepreneurs in the United States, from Venezuela who started this company and it was fairly successful. There’s no evidence that they committed any fraud or that their company committed any fraud, but they were not in any way tied to Dominion. So somewhere along the way, the fact that there were two Venezuelans somewhere and a voting machine company, morphed into, Venezuela runs the voting machine companies, in the warped minds of Rudy Giuliani and Sidney Powell. And that’s why we’re in the position we’re in today. That’s why we had that insane press conference. And that’s why nobody should ever want to hire either of these two individuals as lawyers, because they took one random bit of trivia about a non-related company and then somehow turn that into Hugo Chavez’s ghost just overturned the US elections. Not exactly the kind of attorney you want on your side, but, that’s the best Trump could get, apparently.