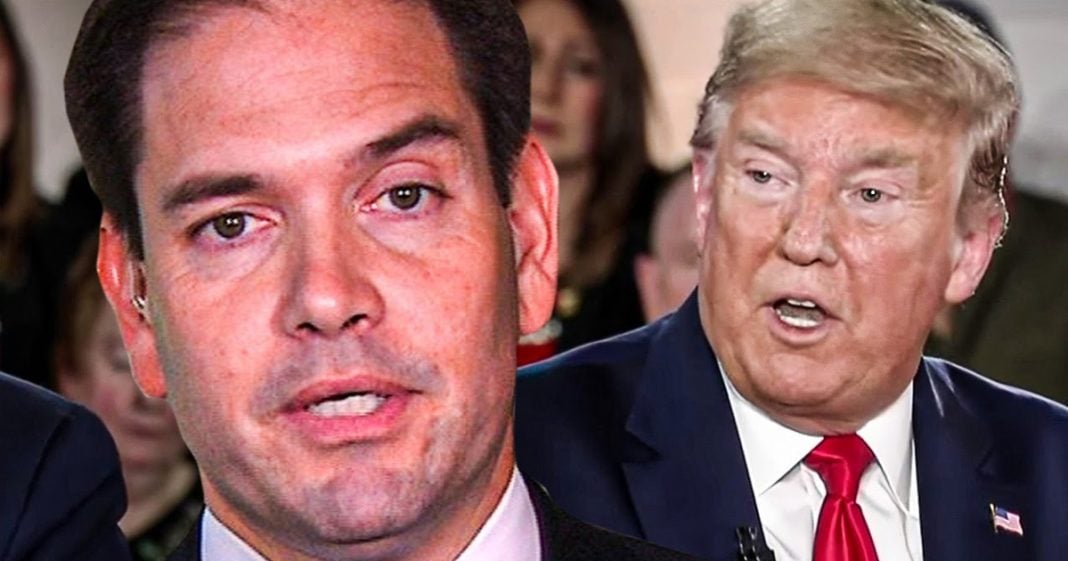 Republican Senator Marco Rubio said recently that impeachment is stupid, and that we already have enough problems in this country to deal with without it. What’s really happening is that Rubio is terrified that he going to be primaried, possibly by someone from the Trump family, and he desperately wants to continue to throw his lot in with Trump so that he can stave off his inevitable political demise. Ring of Fire’s Farron Cousins discusses this.

Appearing on Fox news Sunday yesterday, Marco Rubio, Republican Senator from Florida, said that impeachment is stupid. Well, technically he said the trial is stupid, but nevertheless, Marco Rubio thinks this process that is by the way, spelled out for us in the US constitution, it’s stupid. Here’s what he said. I think the trial is stupid. We already have a flaming fire in this country, the trial would be a bunch of gasoline. The first chance I get to vote to end this trial, I’ll do it. Okay. Let’s unpack that for a moment. Right.

Trial is stupid. There’s so much going on in this country, the country is a fire, he says, and impeaching Trump is just throwing gasoline on it. Marco, Marco, who do you thinks been in charge of the country for the last four years? Joe Biden hasn’t even been in office for a week. The, the fire that you described that you say is happening all over the country, that’s not Biden’s fire. That’s, Trump’s fire to, to an extent that’s your fire too because you’ve enabled him the entire way. So why in God’s name, because you love to invoke God, should we not hold the man accountable for the fire? Like you’re saying Trump screwed the country up so bad that we can’t even focus on the impeachment because we have to focus on how bad he screwed things up. I stand by my statement that Marco Rubio is the dumbest human being in the Senate, in all of Congress, honestly, at this point.

This man is so stupid that it actually causes me physical pain to have to talk about him. That’s how stupid Marco Rubio is. And I mean, every word of that. I’m not kidding when I say nobody in Congress is dumber than Marco Rubio, because he continues, by the way, it’s just a highlight of how stupid the man is. Because he says, I’m going to vote to end this thing as soon as, as soon as I get the chance. He hasn’t been presented any evidence, he hasn’t heard the arguments from either side in an actual trial and he’s already admitting I’m going to dismiss it immediately. Because then he goes on to say this. I think Trump is entitled to due process. You know, the House doesn’t have much of a record of witnesses because they rammed it through very quickly and I think this is going to be a very bad day for the country. So you admit, you admit that we should have due process, which means a trial. That means you get to serve as a juror because you’re in the Senate. You get to present your witnesses, you get to present your arguments. You get to do all these things that you would do in a regular court trial, that is due process. But you had already mentioned in the interview earlier, as I said, that you’re just going to vote to dismiss it as soon as you can.

So no, you’re not actually interested in due process. You’re interested in talking points and not even very good talking points. Where is Chris Christie, when you need him? I mean honest to God, the only good thing Chris Christie’s ever done in his life is end Marco Rubio’s political career, essentially. Like, Marco Rubio will never go further than being a Senator from the state of Florida, thanks in part to what Chris Christie did by dismantling him in those Republican debates from 2015. I want Rubio, excuse me, Christie to come out again, maybe, you know, we can hire him here at Ring of Fire if you’re looking for work. I know you’ve got your network gig, but trust me, we’re much cooler here. Because I would love to just have Chris Christie, a man who I despise, come out every time we have to talk, talk about Marco Rubio and just absolutely destroy him the way he did in those debates because Marco Rubio, again, is stupid.But there’s another reason why Marco Rubio’s having to come out and say, hey, this whole thing is stupid and I’m going to take Trump’s side no matter what. Yeah, it’s because you’re afraid that his daughter is going to primary you and you’re going to lose your Senate seat because if you lose that seat, you have nothing left, Marco. You’re not smart enough to go work at like a think tank. You know, that first word of the title of that thing throws you off a little bit. So you’re going to have to probably go back to the private sector. You might be able to get a job in the media, maybe. I mean, hell, they got Rick Santorum out there. So maybe Marco Rubio could do that. But I don’t think so, man, you’re kind of in over your head. But you’re terrified of a primary challenge, so yeah, you’re trying to throw your lot in with Trump saying, hey, I’m all in with this guy. We’re the best. We’re the greatest. Look at us. We’re a good ol’ team, Rubio and Trump. Not going to work because the second literally anyone tries to primary you, your career will be over.