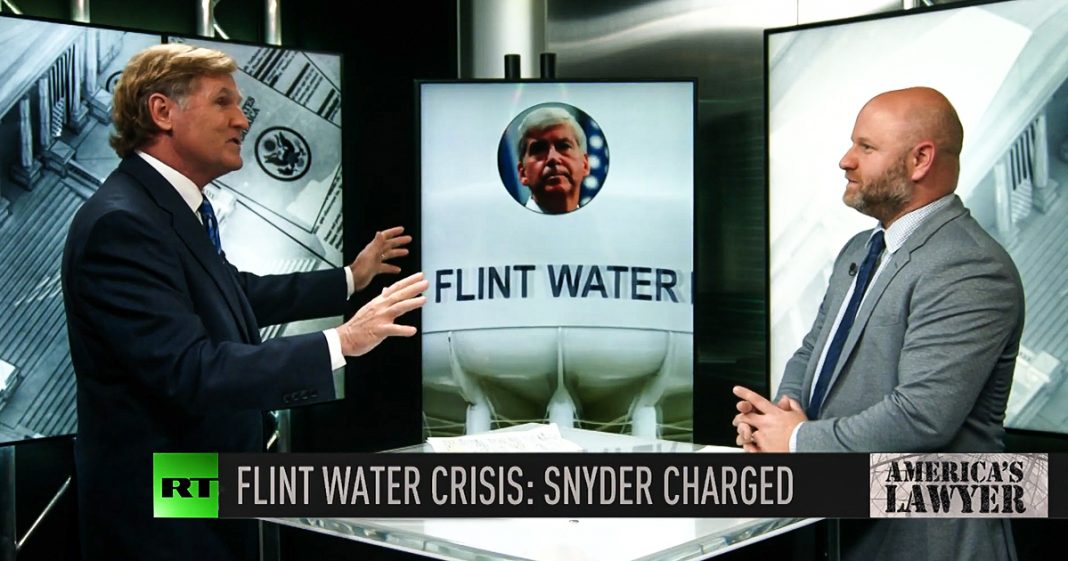 Via America’s Lawyer: Former MI governor Rick Snyder and at least eight other officials are formally charged for their involvement in the 2014 Flint water crisis, which exposed thousands of city residents to lead in their drinking water, possibly triggering an outbreak of Legionnaires’ disease. Mike Papantonio & Farron Cousins discuss more.

Mike Papantonio:             The former state leaders in Michigan who helped cover up a massive disease outbreak as part of the Flint water crisis were finally charged, criminally charged, for their actions last week. I have Farron Cousins from the trial lawyer magazine with me to talk about it. Wow. This is such an important case. It’s first time we’ve seen this in I can’t even remember when. I had, these people are heroes.

Farron Cousins:                  Right, you know, and Snyder’s charges are a lot more tame than they should be. I mean, they’re just getting him for willful neglect. So he’s probably going to get fined. I don’t know that Snyder himself will see any jail time, but some of these other folks, you know, negligent homicide is a charge that you see throughout these charges popping up quite a bit. And it all stems back to not even the lead poisoning problem, but the Legionnaires’ outbreak that started, or at least they learned about it, we know now in October of 2014.

Farron Cousins:                  So we’re talking about six and a half years ago, they knew of this disease outbreak, 12 official deaths, deaths, health experts actually say it’s probably closer to about 115, at least.

Mike Papantonio:             Yeah, well, the, the, the 115 that Legionella has a, causes something that looks like pneumonia. So it’s going to be misdiagnosed.

Mike Papantonio:             Probably most of the 115 people diagnosed with pneumonia also died of Legionella. But the worst thing is they knew exactly what they were doing. This was a flurry. There was this, I don’t know if you took a look, there was an incredible flurry of telephone calls between them. Now, the Intercept again, does a great job on this story. They get all the details and they said, look at the, look at the phone activity between Snyder and all of these henchmen. Now I think it’s, I think it’s really critical when they are charging the henchman with involuntary manslaughter. Because that’s something that could play out really with any corporation who does something like this. What’s your take?

Farron Cousins:                  You know, full, full credit to him and Jenn who wrote this story. But yeah, the, the phone calls they documented there, you see these, these phone calls happening two or three minutes a piece, you know, throughout the span of a day. And then it happened the next day. These officials, what we now know are they’re, they’re calling one another about the Legionella. They’re trying to keep it under wraps.

Farron Cousins:                  They’re, they’re laying out their plan. They’re freaking out behind the scenes and that’s what’s happening. And that is what helped seal the deal for these investigators to be able to come up with these charges. They saw, they were talking, they were talking this person, they played the phone tag, and they all lost.

Mike Papantonio:            This MO can be used in any state. It could have been used up in Ohio where I handled the C8 case, by the way, PFAS, that’s the new, that’s the new booga-bear. We know it’s killing people. We know it’s contaminated in water sources all over the country. Now, what if you are a city official or a County official, or in charge of the water facility and you cover up the fact that PFAS is in there, when we know it will kill you. I got to tell you something, government types, they better keep a real close eye on this because the PFAS, PFAS story, this is where those folks who are covering up how bad this stuff is. This is where they’re some, some, some corporate, some official government official is going to say, you know what, you lied, you created, you, you actually engaged in manslaughter.

Farron Cousins:                  And this is what we’ve been waiting for, not just on this issue, but really on any kind of white collar criminal issue, waiting for the dam to break.

Mike Papantonio:             A courageous AG like, like Dana Nessel. Well, actually there are a couple of AGs right behind each other.

Mike Papantonio:             That both were involved in uncovering this up there. So, wow. The important story.