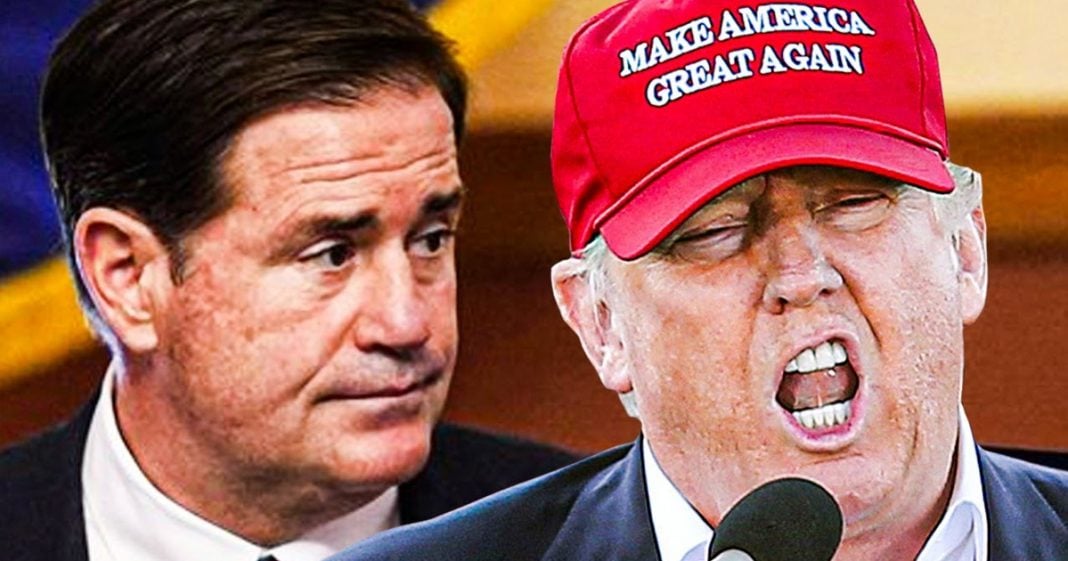 The Republican Party of Arizona has apparently gone insane, and they voted late last week to censure Republican governor Doug Ducey, along with Cindy McCain and former Senator Jeff Flake. The Party is drunk on whatever Trump keeps slipping them, and this move shows that there will certainly be factions of the Republican Party that need to be allowed to destroy themselves so that the country can move forward. Ring of Fire’s Farron Cousins discusses this.

The Republican party of the state of Arizona kind of lost its collective mind this past Saturday when they voted to censure three of the state’s top Republicans, including the sitting governor of Arizona, who is a Republican. So at this meeting, these Republicans got together and they said, listen, we got to decide, are we the party of Republicans who are middle of the road? Or are we the party of Trump? And unfortunately they decided they’re the party of Trump. So their own Republican governor, Doug Ducey, boom, voted to censure him. The other two people who got censured, former Republican Senator Jeff Flake and never served in public office, Cindy McCain. So those two really mean absolutely nothing. Well, let’s be honest, censuring anyone means absolutely nothing because it doesn’t change a thing. There’s no punishment for it. These people are still members of your party.

It is what it is. You’re just saying, I don’t like that you’re not all in for Trump. I don’t like, actually, this is what they were censured for, McCain and Flake, I don’t like that you endorsed Biden instead of Trump. All right. No room for dissension. Cool. Got it. Censure them. Kick them out of your party. Do whatever the hell you want. It’s your political party. You actually have the right to do that. But at the same time, don’t expect the rest of the country to not look at you and be like, wow, you’re a bunch of freaks because guess what, you’re a bunch of freaks. This is ridiculous. The Arizona Republican party is not a political party anymore, the Arizona Republican party is a cult. I’m surprised they don’t have special little hats and outfits that they have to wear and they all don’t live on a little commune somewhere with no contact with the outside world. That is how cultish the behavior of the Arizona Republican party is. So these censures mean absolutely nothing. I mean, to be honest, I’d wear it as a badge of honor. I’d be like, cool. Hey, guess what folks, the freaks think I’m not freakish enough for them. I guess I win, right?

Like that’s what McCain and Flake and Ducey need to be doing here. But this is also the problem. The Republican party has going forward, right? Who are you going to be? Are you going to be the crazy Trumpers or are you going to be a party that’s all about, you know, lying to the public’s face while pushing tax cuts for the wealthy? Those are really the two options for the Republican party and they’re both equally horrible, by the way. There’s no like, good path, the Republicans are going to suddenly jump on after four years of Trump. They’re either going to go back to the horribleness that they were, or they’re going to continue down this path to a whole new level of horribleness and we don’t know which one it’s going to be yet. But I can guarantee you one thing, it sure as hell isn’t going to be fun to watch.