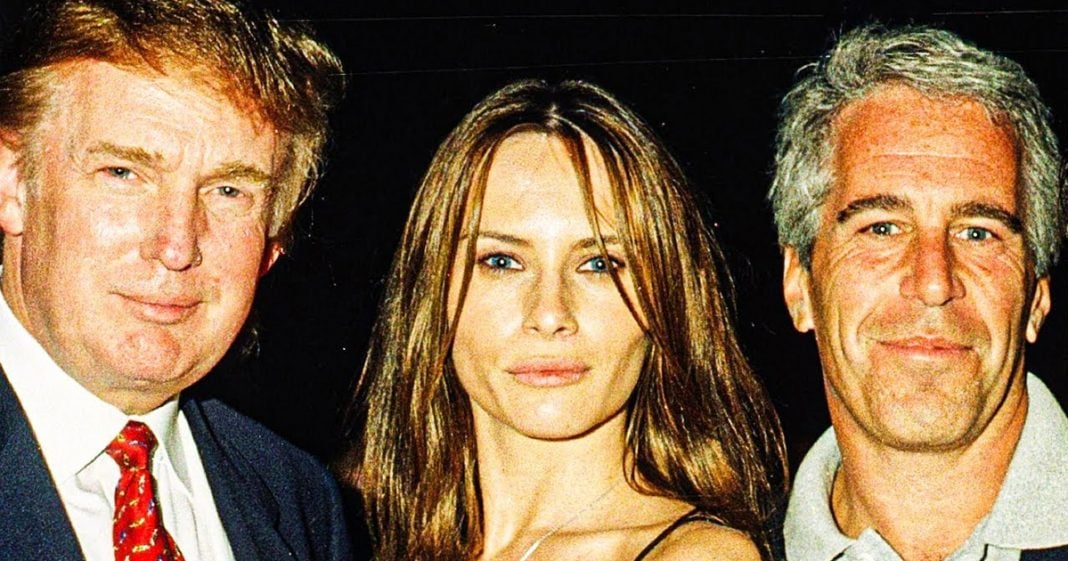 According to a shocking new report in the upcoming book American Kompromat, Donald Trump and Jeffrey Epstein allegedly swapped young women back and forth in South Florida, with the men routinely allowing the women to live at one residence or the other. While Trump’s name has never been brought up by any of the women who have come forward about abuse at Epstein’s property, he HAS managed to slip mostly under the radar with regard to this scandal. Ring of Fire’s Farron Cousins discusses this.

This coming Tuesday, a new book is hitting the market called American Kompromat by author Craig Unger and in the book, Unger actually talks about the fact, you know, reveals this information that Donald Trump and Jeffrey Epstein allegedly shared some of the underage women that were employed by Jeff Epstein. They would spend some of their time at Epstein’s place in South Florida, they would spend the rest of their time living at Trump’s place in South Florida. Here it is, this is an excerpt from the book from Vanity Fair from Raw Story, you know, I don’t, I don’t want to get accused of anything here. So I’m just saying this is from Raw Story who got it from Vanity Fair and Vanity Fair had published the excerpt of the book. So here it is. Trump was often the center of Maxwell’s attention, speaking of Ghislaine Maxwell, and women who entered Trump’s orbit sometimes ended up being associated with both Trump and Epstein spending part of their time living in a Trump tower condo and part in Florida at Mar-a-Lago or one of Epstein’s homes. Trump Model Management, allegedly indulged in many of the dubious practices that MC2 did, such as violating immigration laws and illegally employing young foreign girls. Three former Trump models, all non-citizens of the US, told Mother Jones in 2016, that Trump Model Management profited by using foreign models who came to the United States on tourist visas that did not allow them to work here.

And two of the former models said that Trump’s agency suggested they lie on customs forms about where they planned to live. All of which meant they were perpetually scared of getting caught and pretty much at the mercy of the agency. So they were scared of getting caught. They had to do whatever the agency said because they were the ones pulling the strings and holding it over their head like you’re here and doing these illegally. So you got to do what we say. So you’re going to live here. You’re going to go live with Jeff. You’re going to live at Mar-a-Lago. You’re going to come back to Trump tower, who knows where the hell you’re going to be, but you’re going to do whatever we say, according to the book. Now, I also have to point out the fact that not once, not once, have any of the women who have come forward after working or being forced to work for Jeff Epstein, not one of them, not one of them has ever said Donald Trump was running one of the men they had to have sex with.

So let’s be crystal clear about that. Trump has never, ever, ever been accused of being one of the people who hooked up with these young women. So having said that, however, this story does create quite the problem for the former president, because this does paint a picture of a man who was running an agency and doing the very thing he hates the most, bringing foreign people into this country illegally. Wow. If only people had been talking about this during his administration, when he was trying to stop people from coming to this country, illegally. Oh wait, we all did. And that’s the problem. Yes, we have talked about this story in the past. We have covered it here at Ring of Fire. We have covered it on America’s Lawyer. Other folks in the progressive media have covered this Trump modeling agency story as, as the book itself mentioned, this came from 2016 in mother’s, Mother Jones. Why didn’t Democrats make this a big deal? Why didn’t Democrats campaign on this? Why didn’t Democrats or hell even the Lincoln Project run ads with this information? And how in the hell was Trump able to be this close to Epstein, yet every time people have those Epstein conspiracy theories, it’s always the Clintons? Trump was much closer and much friendlier with Jeffrey Epstein than the Clintons could have ever hoped to be.

There’s videos of them partying together, hell we’ve shown the videos, you know, Trump whispering to Jeff as he’s kind of doing his thing. Like, yeah, look at that one over there, yeah. I mean, come on. And the dude was president when Epstein killed himself in his jail cell. Come on, folks. The fact that Trump was able to escape scrutiny from this entire story, even as Epstein was in prison, even as the whole story blew up in the media, everything always focused on the Clintons a little bit on Trump. You know, obviously the stories would come out here and there, but nobody ever ran with it. Nobody ever did anything with it. It was always about Epstein’s association with Clinton, all went back to Bill and Hillary. Meanwhile, Trump was so good friends with him, they would send women back and forth to each other. Must be nice to be Donald and never have any horrible stories stick to you because by God, there’s a lot of horrible stories out there. This is just one of many.