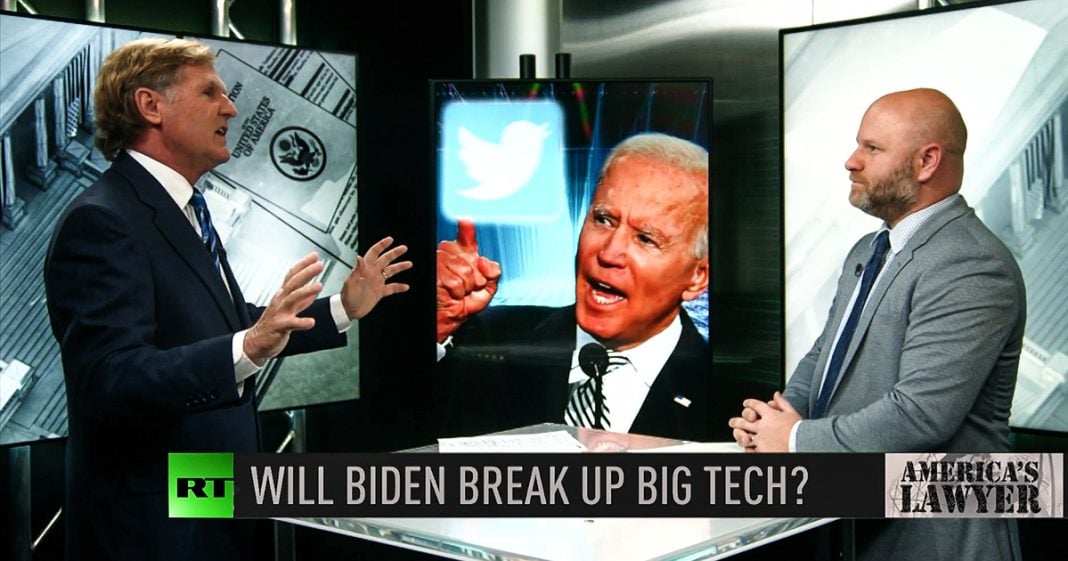 Mike Papantonio:             Big tech companies started to feel the squeeze at the end of the Trump administration. But the question is, is Joe Biden going to help them out? Is he going to be there to say, don’t worry about antitrust, treat us right, treat the Democrats right and we’re going to give you a pass. That’s what it’s looking like right now, to me.

Farron Cousins:                  I mean, that’s what we saw for the eight years of the Obama administration when big tech was just, I guess, medium tech at the time, growing into big tech and Obama, they didn’t know what to do. This was a new thing. Do we, do we crack down on them? Do we just let it go? Do we let it go under the guise of not wanting to stifle American innovation, which is what they eventually tried to sell it as. Like, well, we didn’t want to interfere the, you know, tech was booming. We had all these jobs, all these great things. Who, you want us to tamp down on that? But it was all a farce.

Mike Papantonio:             The first. Everybody he has looking at this that are in a position of power, McSweeney. Okay. I mean, all you got to, take a look at McSweeney, look, look at her background. She is a cave-in for corporate America. She’s only worked for corporate America. She is advising him. They’re not going to do anything about it. The trade-off is, look, just treat the Democrats well in the next election, make sure you continue sending us money. Make sure we get the headlines in social media and people like McSweeney and all of the flying monkeys that he’s put together here are going to just forget about the antitrust case here, I promise you.

Farron Cousins:                  Right. And one of the names being floated to actually handle this arena over at the DOJ is Susan Davies from Kirkland and Ellis.

Farron Cousins:                  Represented these tech giants.Also somebody who was from the, the Obama administration. So yeah, we’re looking at kind of the same people running the same things, trying to regulate the same companies they use to represent in these corporate law firms. It, it is a carbon copy of what we saw during the Obama years.

Mike Papantonio:             No different. There are no, there are no peoples advocates in this administration. So far, no peoples advocates, especially when it comes to looking at this. Now look, here’s, here’s what we’re trying to stop. The notion of crush or buy. Crush or buy is, is in the vernacular now. That means when Facebook comes in, Twitter comes in, Google comes in, they get a competitor, they either buy them or they crush them. That’s been going on for more than a decade. Biden knows how serious this is. At some point before they started sending him all that money, yeah, I’m going to take a look at this. The people he’s appointing right now, not a chance in hell that they’re going to do anything about the antitrust issue.

Farron Cousins:                  You know, don’t do this, but they’re going to let them get away with the most egregious things, which is what we always see from these regulatory agencies over the last 20 years. You pop them for something small. You make a big headline about it, but the worst offenses still continue to happen.

Mike Papantonio:             And the money is rolling in even after the election, like it’s never rolled in from big tech.

Mike Papantonio:             What are they paying for now, elections over baby? You know, what they’re paying for now is a nod from Biden to say, yeah, we’re going to give you a free pass here.