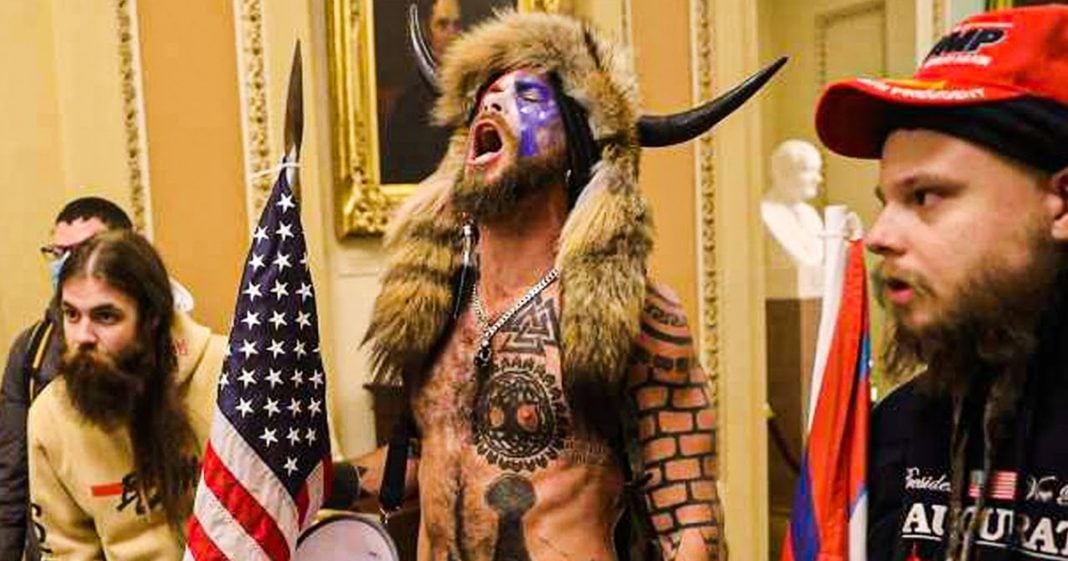 One of the lawyers representing a Trump supporter who stormed the Capitol says that his client (the man seen in photos wearing horns) feels like he was duped by Trump because he didn’t receive a pardon. Not pardoning these freaks might be the only good thing that Trump did in his remaining days in office, as it allows the country to actually move forward and hold these weirdos accountable. Ring of Fire’s Farron Cousins discusses this.

A lawyer for the lunatic who helped storm the Capitol, you know who I’m talking about, the guy that didn’t have a shirt on and he had the horns coming out of his helmet. You’ve seen the pictures, you know, who I’m talking about. Anyway, his lawyer has now publicly said that this poor guy, Jacob Chansley, I think his name is. Jacob Chansley, 33 years old, by the way, old enough to know better. So mister Jacob Chansley feels like he was duped by the president of the United States into storming the Capitol. In fact, here’s the actual statement. He said, he regrets very much having, not just been duped by the president, but by being in a position where he allowed that duping to put him in a position to make decisions he should not have made.

FYI folks, this is not the first event that Mr. Chansley has shown up to wearing his weird little shaman outfit. He’s actually, he has a nickname and he’s been at all of these other events as well. This is what he does. And I hate to make it sound like I’m actually defending Donald Trump here, but what’s interesting about what we’re seeing now, and this is kind of almost like a coordinated thing, even though I know they’re not colluding together, but all of the lawyers for all of these people are now coming out and saying my client was duped. Oh, my client said, Trump said to do these things. They’re all trying to pin it back on Donald Trump. Not just because that, yeah, it seems likely Trump did do these things, but if you can shift the liability away from your client onto someone else, your client’s still going to be punished, but the punishment is not going to be as severe.

You paint your person as the victim, which is exactly what this, you know, Jacob Chansley’s lawyer is trying to do here. They also go on to say, they’re, they’re heartbroken. They’re furious over the fact that they didn’t get pardons. And to be honest, that might be the only good thing Donald Trump did in his final month in office was not pardoning these wackos. I was terrified. I truly was terrified that he was going to issue pardons for all of these people and I was shocked and relieved when that didn’t happen. I mean, I’m still off about some of the pardons he did issue, but, you know, not pardoning these people. And also I was scared he was going to pardon Kyle Rittenhouse. So those individuals not getting pardons, that’s wonderful. That means we still get to prosecute. That means we still get to move on as a country by putting these people through the justice system.

And I have no sympathy for them. And I don’t believe for a second that they’re only doing that, like, oh, I was duped. No, you’re a lunatic. That’s what it is. Like Donald Trump could have told you anything and you would have probably done it. Not because it was Donald Trump telling you, but because there’s something not clicking right in your brain. Now this is the same guy, by the way, Jacob Chansley, the prisoner, you know, horn helmet man, who about a week or so ago, his mother came out and said, oh, he’s not eating in the jail because he only eats organic food and they’re not giving him organic food in prison and it’s not fair. Yeah.

I mean, I’ve already said this once today, I’ll go ahead and say it again, play stupid games, win stupid prizes. So I’m sorry that after storming the Capitol, you don’t get to have your organic food anymore. Maybe that’s something you should have thought about beforehand. I have no sympathy for these individuals. I’m not buying a single word of their defenses. And I don’t think juries are going to be as, you know, any more forgiving than I’m being here. These people are in a lot of trouble, so they can be angry at Trump. They can feel like they were duped by Trump. They can be off that they didn’t get their pardons, but at the end of the day, these are grown people. They made their decisions and they’re about to have to live with the consequences.