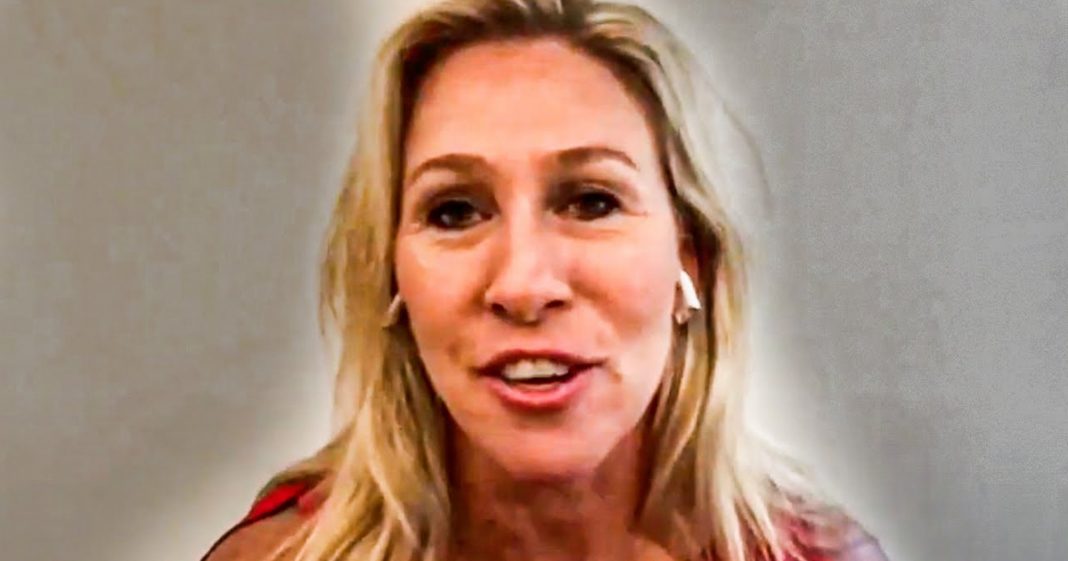 Republican Representative Marjorie Taylor Greene has finally introduced her articles of impeachment against Joe Biden, just one day after he was sworn in. She had said that she would be introducing the article immediately after he was sworn in, but then admitted Thursday morning that it was a lot harder than she thought it would be. Ring of Fire’s Farron Cousins explains why Rep. Greene needs to be expelled.

Republican Congresswoman Marjorie Taylor Greene has finally, after all this time introduced her articles of impeachment against president Joe Biden. She did this yesterday, which was his first full day in office, but I say finally introduced them because let’s not forget just days ago, she had promised us that she was going to be impeaching Joe Biden shortly after the inauguration. But instead she teased it out for a full 24 hours before she finally filed those articles, leaving us all to wonder what the heck was going on Marjorie. Well, it turns out she was having a little trouble with it, folks. Yesterday morning, it was reported that Marjorie Taylor Greene had told those around her that she thought it was going to be a lot easier. She didn’t know it was going to be so hard to draft these articles. Oh, man, it’s a lot of work. And so at the time yesterday morning, everybody thought, well, I guess it’s not going to happen. She’s really, really struggling here. We got to give her some space.

But she came through at the end of the day, released her ridiculous articles of impeachment, that by the way, are only including charges that Republicans have actually already investigated and determined to not be true. But hey, what do you expect from the Congresswoman who follows the Q-tip crowd? I mean, this is what you get. Play stupid games, win stupid prizes, people of George’s 14th district and this is what you got. This is your Congresswoman. And she is just about as loony as they come. Honest to God, Marjorie Taylor Greene needs to be expelled from Congress. This woman is not right. And I’m, I, I’m trying to say that like in the nicest way possible, but I honest to God truly believe from the bottom of my heart, that there’s something wrong with her. A normal person does not behave in this manner. A normal person does not get sucked into these idiotic and crazy conspiracy theories. I think she needs a psychological evaluation. I think this woman legitimately needs help and the longer she doesn’t get help, the worst she’s going to become. That’s typically how it happens with mental illnesses. And sure, it’s fun to mock her. It’s fun to, you know, make fun of what she’s doing there, but at the end of the day, it, it’s really detrimental because I do believe that this woman needs help.

That aside, let’s talk about the actual charges in the impeachment, right. Okay. So she says he abused his power with Ukraine, getting them to fire that prosecutor that, oh, by the way, like a dozen other countries in the world were also pressuring Ukraine to do. She said it was a quid pro quo, which I’m assuming she only learned that word because of Donald Trump’s first impeachment. Probably prior to that, she wouldn’t have been able to tell you what that meant. She probably still couldn’t tell you what it means. So that’s basically the two big things. He abused his power as vice president, as I mentioned, Republicans have looked into this, the DOJ has investigated it under a Bill Barr. Senate Republicans last year investigated all of this manner, matter, and by the way, their report was so lackluster, they found so little evidence that even made Biden look bad that they released it at like 5:00 AM on a Wednesday morning.

That’s when they put out the final report of Joe Biden’s Ukraine adventure. They had nothing. And Marjorie Taylor Greene’s little impeachment thing is going to go nowhere. It’s much like, you know, Democrat Al Green, from the early days of the Trump administration. Every couple of months, it was like, ah, I’ve got articles of impeachment. We did videos on him talking about how crazy that was and how idiotic that was. And I only bring that up just so everybody knows, hey, I’m not just picking on the idiot Republican for doing this. I did the same thing to Al Green and the other Democrats when they were trying to impeach Trump for, you know, everything under the sun. That’s not how this works, but I do believe there is a level of oddity to Marjorie Taylor Greene that truly makes her stand out from the other people who’ve, you know, prematurely released these impeachment articles against a sitting president. She, she needs help. She honest to God needs help and I don’t know what more to say about that.