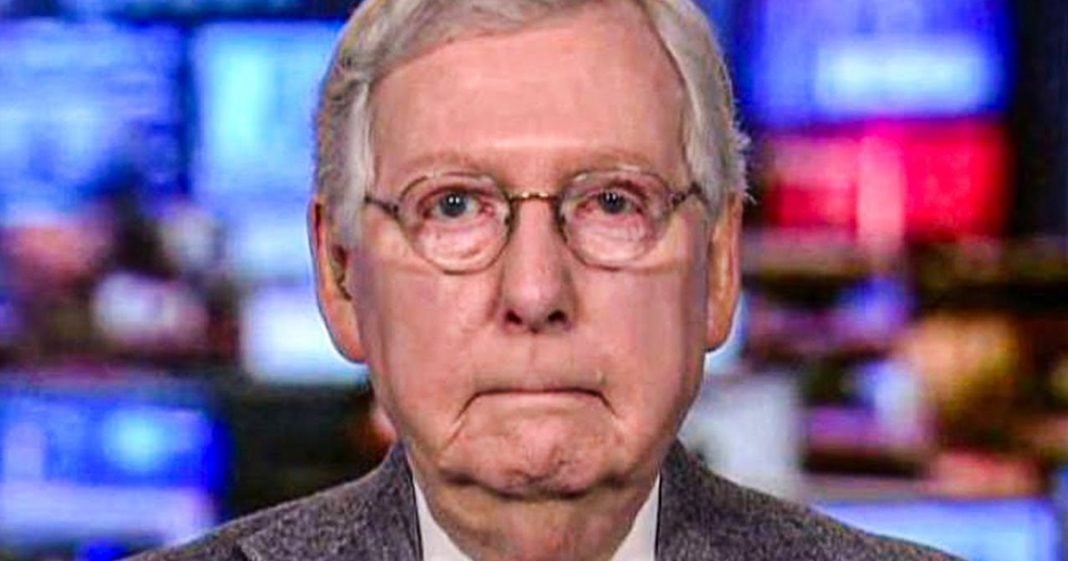 Senate Minority Leader Mitch McConnell is pleading with Senate Democrats to leave the filibuster in place so that no single party has absolute control over the chamber. Democrats aren’t keen on listening to McConnell’s demands after everything they just went through, and they shouldn’t entertain a single idea that comes out of that man’s mouth. Ring of Fire’s Farron Cousins discusses this.

There is a major fight taking place in the Senate right now over how the Senate is actually going to move forward with a 50 50 split with Democrats having the vice presidency as the tie-breaking vote, thereby giving them the majority. Everybody’s confused. Everybody wants the power and Mitch McConnell says, I’m going to let you have that power, even though he has no authority over whether or not they have the power, but I’m going to let you have the power, Mitch McConnell says, if you do one thing for me, please, don’t kill the filibuster. Just leave it there. I promise we’ll be good. You can trust me. You can trust your old buddy, Mitch. Mitch ain’t gonna let you down. Mitch has been there for you. Mitch is your guy. Mitch is your buddy. We’ve worked side by side for 35 years.

But to me, the big thing that stands out about this story is the audacity of it. Mitch McConnell, begging, please don’t take away the filibuster. We’re going to be good. Honest, totally not going to screw you over, like I have been for the last 10 years and man, I’ve got you good. But I’m totally done with that. Not doing that again. So just forget that whole thing with Merrick Garland and, you know, the Amy Coney Barrett and, and all of that. You know, we’ll just pretend that didn’t happen. Forget all the times when I blocked, you know, COVID relief and election integrity bills and the hundreds of judges I forced through for Donald Trump that have ridiculous conservative ideologies. Most of, not most of them, but some of them never even tried a case in their lives and they’re all, you know, young. Going to be there for maybe 50, 60, more years.

Forget all that Mitch McConnell says. I’m really going to be a good boy now. To hell with Mitch McConnell. To hell with anything Mitch McConnell wants. Mitch McConnell shouldn’t even be allowed to have a seat at the table anymore. Screw him. Democrats, you do have the majority, you do, by rules because you have the Senate breaking or the tie breaking VP vote. You have the majority, you get to chair the committees, stop making deals with these and get some things done. They wouldn’t extend you these same courtesies, don’t do it to them. Yeah, I am saying fight dirty. I am saying don’t be nice. I am saying don’t bring a knife to a gunfight, you morons. They have done everything possible to strip you of your power, to demean you, to undermine you and to demonize you to the American public for well over a decade. Screw them. Help the American public by ignoring the demands of the Republicans in the Senate.