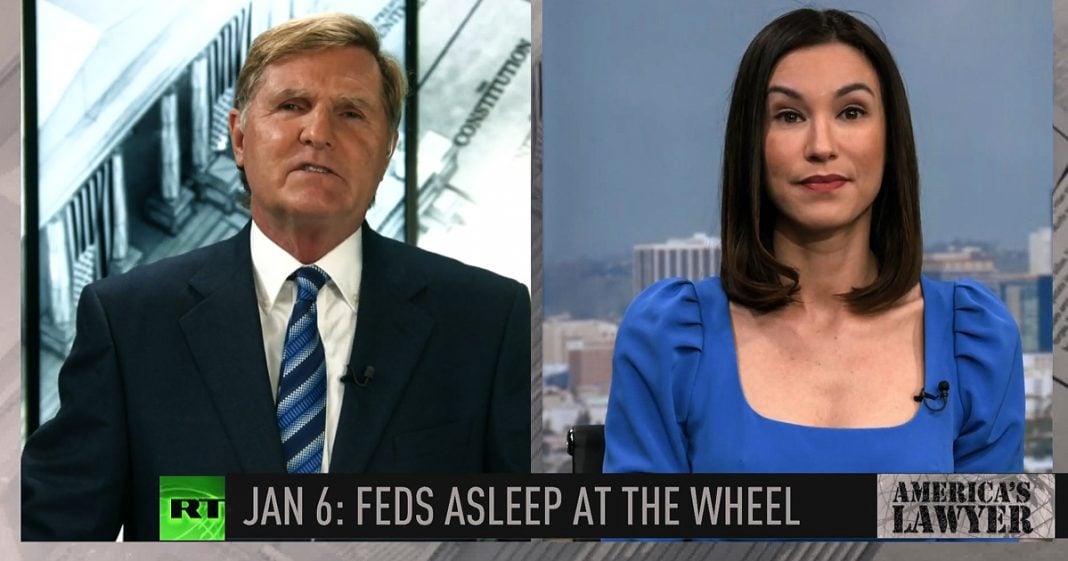 Via America’s Lawyer: The FBI has been compiling information on extremist groups and white supremacists within law enforcement since 2006. RT Correspondent Brigida Santos joins Mike Papantonio to discuss the staggeringly inadequate response to the Capitol insurrection, which investigators agree could have been prevented based on their findings across social media.

Mike Papantonio:             The Department of Homeland Security and the FBI are facing scrutiny for failing to take warnings about violence seriously before the January 6th riots on Capitol Hill. Brigida Santos joins me now to talk about the details of all that. Brigida, what, what did law enforcement agencies know before the siege? It seemed like it was overwhelming. All they had to do is look on social media to see what was coming their way. What’s your take?

Brigida Santos:                   Yeah. Back in December, the New York police department actually warned the FBI and the Department of Homeland Security that violence was very likely to occur on January 6th, as Congress met to certify the results of the presidential election. And one day before the siege an FBI office in Virginia actually issued an internal warning that extremists were traveling to Washington to commit violence. FBI personnel there reportedly even identified threats to Congress and said, people were sharing maps of the Capitol’s tunnel system. But despite receiving that raw intelligence, no formal threat assessment was issued to local law enforcement officials to help them prepare for the violence. And of course, as a result, the world watched as pro-Trump protestors stormed the Capitol in an attempt to stop the election for being certified. If law enforcement had heeded their own warnings, five people who died that day might still be alive. Two suicides after the fact may have been prevented and the authorities would not still be looking for suspects who committed variety of crimes, including placing explosives at the offices of the Republican and Democratic national committees. This was a stunning security failure.

Mike Papantonio:             Amazing. These are the folks that are protecting our country from terrorism, by the way. If law enforcement new threats existed, I mean, why didn’t they prepare? The, if you really think about it, there is no, there is no rationale. There, there’s, I, I’ve read their talking points. It’s just nonsense. There’s no rationale here. What is your take?

Brigida Santos:                   No, some FBI officials, you know, they’ve told reporters that producing a formal threat assessment might have infringed on the free speech rights of demonstrators, but we know that’s not really a concern because over the summer, the FBI and DHS took the opposite approach when issuing full intelligence bulletins before the black lives matter protests in Washington. Now it’s unclear whether the backlash from those events got them to change their tune here, but they also weren’t prepared basically due to problems within the bureaucracy. Now, since the siege, law enforcement agencies have been pointing fingers at each other, and while real vulnerabilities have been exposed in the chain of command, there are bigger conversations taking place behind the scenes now about the importance of impartiality in assessing threats. They basically just didn’t think these people were going to actually be a threat.

Mike Papantonio:             Well, you know, the, what’s most so bothersome, this takes me back to 9/11. When we know that there, there’s this inner agency fight, this childish idiotic stupidity that exists between one agency, like the FBI and another agency, like the CIA, where they want to own the issue. And so they allowed in many ways, 9/11 to take place. And this just pops, I mean, just this first thing that comes to my mind as I read this story. Racism is a problem in America, including law enforcement, and I’m wondering how common is the problem in policing, because, because there are critics out there that are saying part of the problem is racism, because had this been a bunch of, you know, African-Americans coming here, we’d have big old fat problem. What’s your take?

Brigida Santos:                   Yeah. Back in 2006, the FBI outlined the threat of white nationalists infiltrating police departments to disrupt investigations into fellow members and to recruit other supremacists. And at one point here in Los Angeles, there is a perfect example, members of a local Sheriff’s office actually formed a Neo Nazi gang and terrorized black and Latino communities. A 2015 counter-terrorism policy guide later outlined how the FBI quietly investigates law enforcement’s white supremacy problem. Now investigations have exposed individual officers and in some cases, entire agencies with ties to hate groups, yet this problem persists today. Now since 2001, more than 250 black officers have sued the Capitol police department over racial discrimination. Current and former black officers there say, they’re not surprised that rioters wearing or carrying racist symbols burst into the Capitol so easily. Several Capitol PD officers have even been suspended for possible complicity with rioters. One of them, one of those rioters was seen carrying a Confederate flag and officers were just letting them in.