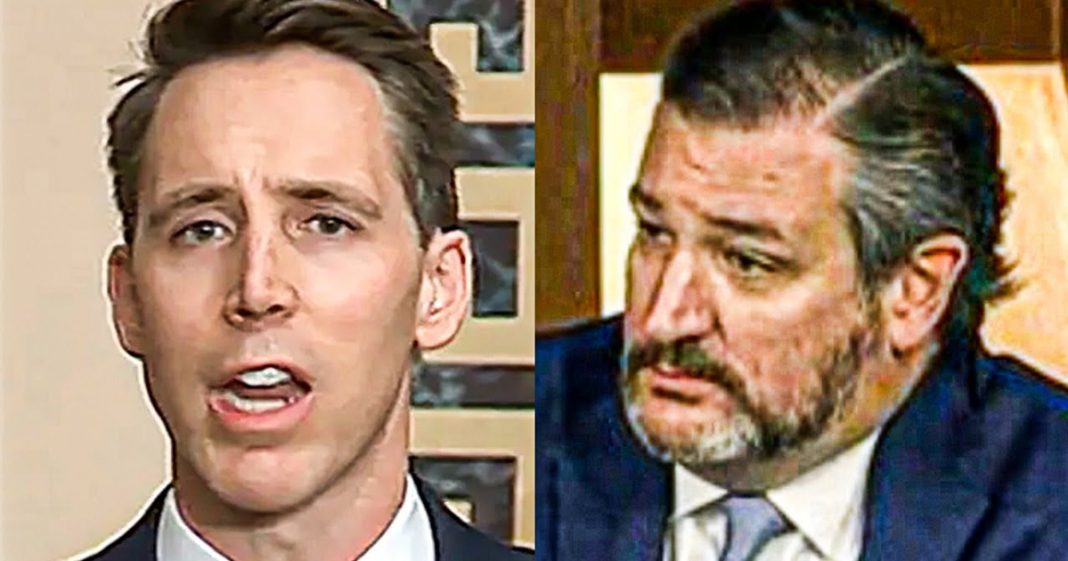 Republican Senators Josh Hawley and Ted Cruz are about to face the music after being hit with ethics complaints for their attempts to overturn the 2020 election. The two men certainly deserve this, but they were not the only two who acted in this manner, and they shouldn’t be the only ones getting hit with ethics violation complaints. Ring of Fire’s Farron Cousins explains how this maneuver might end up backfiring.

Republican senators Ted Cruz and Josh Hawley, are only watching their problems grow. They have now been referred to the ethics committee with an ethics complaint for their role in inciting the individuals who on January 6th came and stormed the Capitol. Hawley, as most of us have seen is in that photograph, walking past them, you know, giving the fist of solidarity before they stormed the Capitol. Ted Cruz was whining and crying for weeks about the election allegedly being stolen, about these improprieties, offering to be Donald Trump’s attorney and take it to the Supreme Court because he thought it was fraudulent. And all of these actions, according to the ethics complaint filed with the ethics committee, say, look, you got to expel them, or you got to censure them. Censuring does nothing. It will accomplish absolutely nothing. Censuring is stupid. Censuring shouldn’t even exist.

It is just a formal declaration that we don’t like what who did. Who cares? I mean, a referral in high school is actually more consequential than a censure. Expulsion, expulsion is the option. But I, I do have to wonder if we get to the point of expulsion, these two men would, I assume be allowed to kind of make their case as to why that shouldn’t happen. And unfortunately, they may have actually a pretty strong defense here. And that is that they are being the ones, they’re the ones being singled out out of many, many Republicans who did the same thing. They may not be, you know, showing the fist of solidarity, but these two men were not the only ones who objected to the electoral college votes. Newly elected Alabama Senator Tommy Tuberville, object, objected to them. Other Republicans objected. It was not just these two, but you’re only singling out these two in the ethics complaint.

That is problematic. In fact, to me, that is very problematic. You know that these two men have presidential ambitions, right? They want to keep moving up. The Senate is not where they intend to retire. They want to retire after reaching the White House. And that’s why they’re singling these two men out in particular because they view them as threats in 2024. This much is obvious. But when these men are allowed to kind of state their case and give their own defense, you know, facing expulsion, it’s exactly what they should say, because that is going to kind of show the public because that’s what any expulsion would be about, that, hey, they’re scared of me and they’re trying to get rid of me. If it was actually about X, Y, or Z, all these other people would be standing next to me, but they’re not. They want to get rid of me, because they’re afraid of me.

And that’s actually going to endear these individuals to their base a little bit more thus giving them more power. I agree that these two men should be expelled from, from the Senate. I also agree that there’s at least six, no, what is it, 10 more that need to be expelled as well. And then 132, I believe in the House of Representatives. They all need to be expelled. Every single one of them, not just two of them, not just 20 of them, but every one of them, anything short of that is going to look like a political witch hunt. They all did it. So you have to go after all of them.