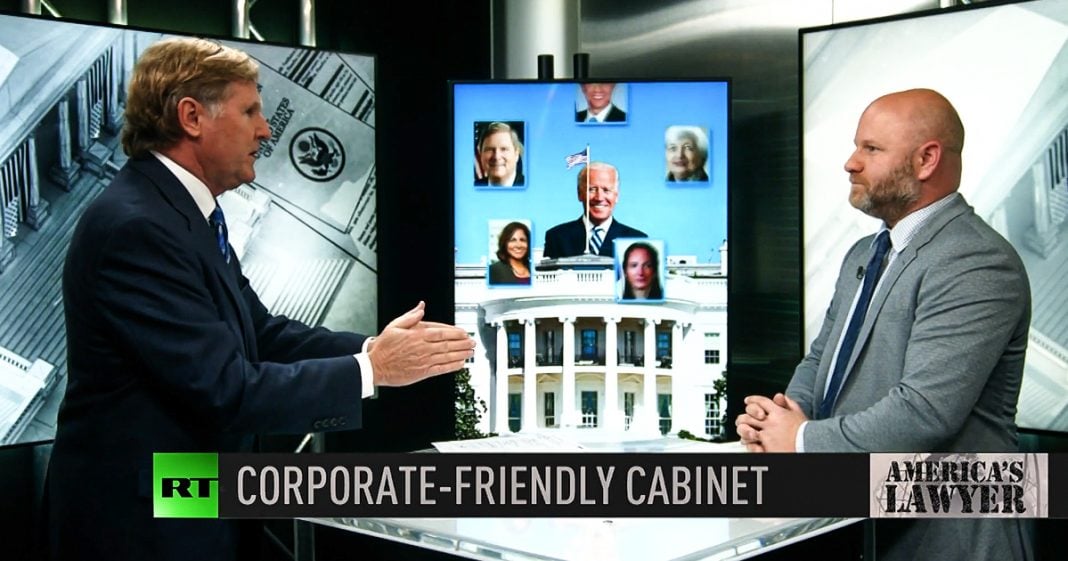 Via America’s Lawyer: To the dismay of progressives, Biden’s cabinet picks have a long history of favoring corporations over people. Mike Papantonio & Farron Cousins discuss more.

Mike Papantonio:             Joe Biden was given a great opportunity to move the country forward. But his cabinet picks look more like the same, you know, right top of mind, Blinken.

Farron Cousins:                  Well, they work with the defense industry and they brag on their website, actually talking about the fact that, hey, we’ve got this direct line basically into the White House at all times.

Mike Papantonio:             They, they literally are bragging we’re just right down the street from the situation room. Now these, Blinken all the folks that surround this whole deal, are all his buds.

Mike Papantonio:             They, they, they were the same warhawks when it came to Syria. In a second, they would love to start a cold war with Russia. Who knows whether thinking about China. But I can bet you, I can tell you this, they’re warhawks. Now that’s just Blinken. Let’s go to, let’s go, let’s go some, let’s go to Janet Yellen.

Farron Cousins:                  Yeah. I mean, Yellen has the same problem Hillary Clinton had, you know, taking millions of dollars to give these closed door Wall Street speeches, just in the last two years, I think what, more than $7 million in two years.

Mike Papantonio:             And they asked her when all this was going on, was Janet can’t you share, share with the American public what you’re sharing with these folks that are smoking cigars in oak rooms, drinking, you know, drinking scotch. Can’t you share with us what you’re sharing with them? And absolutely not. I have a right to say what I want to say behind closed doors. We know what she’s saying, but she’s, she’s the person right now.

Farron Cousins:                  Right. And of course you have the, the hardcore establishment Democrat super fans on social media who, anytime and Ana Kasparian pointed this out from TYT in an op-ed, she says, anytime, you know, you point out these flaws with somebody like Janet Yellen, they immediately try to shut you down as, oh well it’s because.

Farron Cousins:                  Yeah. It’s, no, we can have legitimate concerns about somebody regardless of their gender. They can still be a bad person even if they’re women.

Mike Papantonio:             Here’s the biggest obstacle in making this administration do what they need to do to shake up this awful four years we’ve been through, here, here it is. The biggest obstacle is tribalism. It’s the, it’s the goofy cat out there that says I’m a Democrat and everything Democrat is important and I’m just going to stand behind them, whatever they do. It is so dangerous because the American public is waiting for Biden to look different than Obama.

Mike Papantonio:             To look different than Hillary Clinton. But everybody he’s appointing is just part of Hillary Clinton’s gaggle of flying monkeys. That’s the problem here. And if they would just say, okay, you know, we’re going to listen to AOC. We’re going to listen to some of those folks on the, on the left, progressive on the left that, that’s, that are telling us, don’t do this again. And we, we, we missed a bullet last time. Don’t do it again.

Farron Cousins:                  Right. And of course they don’t listen because they go back to the same people they know, the same people who run the powerful organizations and the think tanks are the same ones who were there, you know, 14 or 12 years ago, they’re going to be there four years from now as well. Probably advising Kamala on how to run her campaign. I mean, it’s the same people every time.

Mike Papantonio:             And Blinken is, is the warhawk has, has been involved in more, stirred up more wars all over this globe then we can, then we can count and, and Biden said, yeah, that’s our guy.