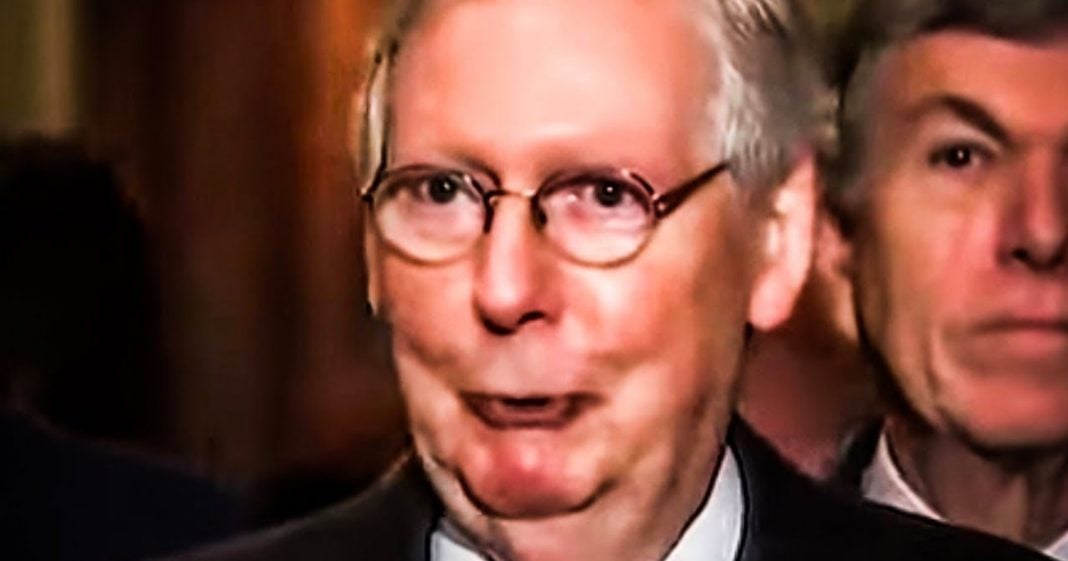 Mitch McConnell says that he believes that Donald Trump helped spark the violence in the Capitol with his words earlier this month, and that statement isn’t sitting well with Republicans. They are now worried that he will end up voting to convict Donald Trump during the Senate impeachment trial, and Republicans are freaking out about that prospect. Ring of Fire’s Farron Cousins explains what’s happening.

Yesterday, Mitch McConnell, the outgoing Senate majority leader and that might be one of the sweetest phrases I’ve ever gotten to utter here on Ring of Fire, but the outgoing Senate majority leader, Mitch McConnell yesterday on the floor of the Senate, admitted that Donald Trump provoked the angry, violent mob that stormed the Capitol on January 6th. Mitch McConnell in his own words said, the last time the Senate convened, we had just reclaimed the Capitol from violent criminals who tried to stop Congress from doing our duty. The mob was fed lies. They were provoked by the president and other powerful people. Now for a guy that is about to be a part of a Trump impeachment trial in the Senate, the leader of the Republicans in the Senate for him to come out on the Senate floor where the trial is going to be held and say he did the thing that Democrats just impeached him for.

I want everybody to understand that that is what Mitch McConnell just did on the Senate floor yesterday. He admitted that Trump did the thing that he’s being impeached for. So naturally Republicans started freaking out, right? Rand Paul was furious about this. Other members of the conservative media were furious. How can Mitch McConnell do this? We’re supposed to be uniting. We have to move forward. Stop re-dividing the country with your impeachment talk, Mitch McConnell. Yeah, kind of seems like Mitch McConnell would be going the other way, right? Well, don’t get your hopes up folks. Let’s not forget that just like a week ago, Mitch McConnell was all about, hey, I might be open to removing him from office. And then the next day, the next day he said, yeah, we’re not taking up the impeachment trial while he’s still in office.

Sorry. We’re, we’re dismissing till after the inauguration, see everybody. Thanks for playing. Yeah. Nobody knows what Mitch McConnell is going to do. And again, he made these statements yesterday and last time it only took him 24 hours to basically do a complete 180. So God only knows what he’s done by now, right? He could be giving a speech right at this very moment saying, I will block any efforts to impeach a former president. We’re not going to make this happen. So who knows. Mitch McConnell is not reliable. Mitch McConnell is not trustworthy. Mitch McConnell is not the kind of guy that we should take for his word. Because again, just the last week he has proven that he’s not the kind of guy that keeps his word no matter what his word is. But, but, regardless of what he chooses to do from this point forward, these words on the Senate floor are now on the record, which means they’re now evidence.

So if Mitch McConnell wants to get up at that trial and say, well, I don’t think we should impeach him. Somebody can just be like, hold up man. This you? These your words? These your words right here? Yeah. I think they are. Yeah, you said he did it. So what changed Mitch, minority leader Mitch McConnell, what changed bud? The answer will be absolutely nothing. And we just have to wait and see how Mitch reacts to having his own words thrown in his face, only of course, only if we need to do it. In the meantime, it’s going to be fun watching Republicans freak out over thinking Mitch McConnell is going to do the right thing, while the rest of us understand Mitch McConnell’s never done the right thing. So we got to wait and see.