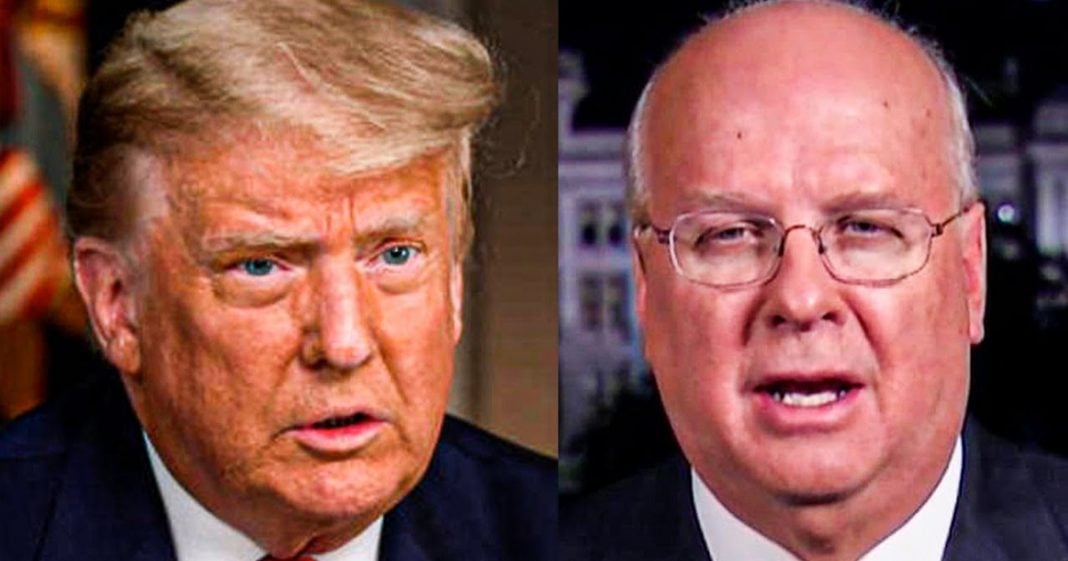 On Sunday, Republican strategist Karl Rove issued a warning to Trump about using incompetent lawyers during his impeachment trial, saying that using Giuliani would certainly increase the chances of conviction. Giuliani has said that he will not be acting as Trump’s lawyer, but that doesn’t mean that the other names being floated by Trump are any better. Ring of Fire’s Farron Cousins explains what’s happening.

This past weekend on Fox news Sunday, Republican strategist Karl Rove, issued I guess what you would call a warning to Donald Trump. And that warning was if you hire Rudy Giuliani as part of your legal defense for your upcoming impeachment trial, you can pretty much guarantee that you’re going to be convicted in that trial. Now, before we even get to Rove’s analysis of that, let’s talk for a second about whether or not this impeachment trial is even going to happen. You know, you had Lindsey Graham come out just, you know, 48 hours ago telling us that, no, no, we, we, we may not do the trial. We may just dismiss, dismiss the charges without even holding a trial. So Republicans, high ranking ones like Lindsey Graham, just want the whole thing to disappear immediately because, you know, unity is what they’re saying. Oh, if you impeach him, eh, we’re not going to have unity here.

Look, y’all never had any intention of unifying with anybody on the left. You just don’t want your guy to end up convicted. So that’s what your real concern is. And as Rove points out, if he has Rudy Giuliani trot down there on the Senate floor giving his defense, it’s probably gonna happen. Rove pointed out the fact that Giuliani has had his legal arguments rejected recently by over 50 different courts here in the United States and that his, you know, the fact that he was also there at these rallies, probably not going to sit well. And actually his appearance at these rallies is what led Giuliani, who, to come out shortly after Rove’s appearance on Fox news Sunday and say, listen, I’m not representing the guy because I was at the same rallies, I would be considered a witness. And therefore I cannot act as his attorney.

So Rove’s concern about Giuliani being the lawyer nullified at this point, right? Because Giuliani can’t be the lawyer because he’s in fact a witness. So who are you going to get? You know, we already talked about the fact at the end of last week that Trump wasn’t able to get any real lawyers to defend him on this. He had made requests to multiple different law firms and lawyers, and they all said, no, including like some pretty strong allies of his, you know, former Florida attorney general, Pam Bondi even said, yeah, I’m going to, I’m going to go with no on that. Thanks for the offer. No word yet on whether Dershowitz is a no, he defended Trump in the last impeachment trial. He’s got his own issues to worry about right now, still though. So we’ll see about that. So the two names being floated are Jim Jordan and Matt Gaetz. Matt Gaetz, who did go to law school.

We know that. He’s, you know, admitted to the Florida bar. But he basically went to law school just so he could immediately jump into politics like daddy before him. Daddy groomed him. Daddy created this monster and as soon as he graduated law school, started pushing him into the political arena, not the legal arena. So Matt Gaetz, who has been removed from legal, law practice, excuse me, for many, many, many, many years, probably not the best case. Same thing with Jim Jordan. You know, you really want the former wrestling coach who turned a blind eye to all the kids being abused? You really want those to be the two men you parade down there on the Senate floor to say defend me? Yeah. Honestly, at that point you might even be better just having Giuliani because the idiot squad having Beavis and Butthead down there, yeah, um, not so sure that’s gonna work out in your favor. But then again, we really don’t want it to work out in your favor, now do we?