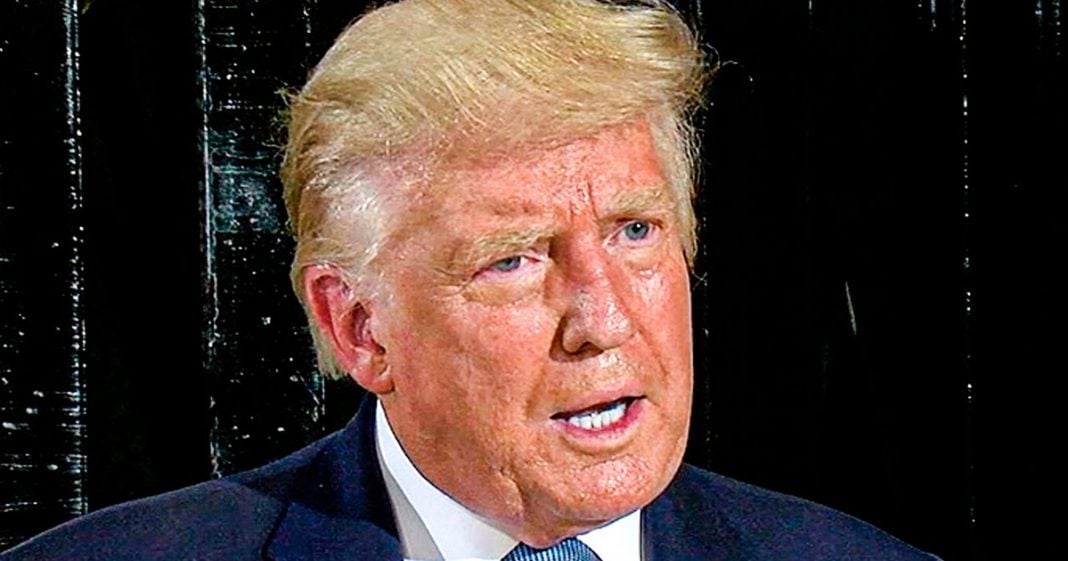 The latest data tells a very dark story about how dangerous Donald Trump’s words can be. In the short time since he has been banned from Twitter, election misinformation has fallen by a staggering 73%. There is still plenty of debate about whether social media platforms should have the right to ban users, but there is no denying the massive influence these platforms have in shaping public conversation. Ring of Fire’s Farron Cousins discusses this.

It’s been a little over a week since Donald Trump got permanently suspended from Twitter. So let’s just call it what it is, it’s a ban, a permanent suspension, is in fact a ban from Twitter. And according to the data, misinformation about the 2020 presidential election dropped by 73% in the first seven days, following Donald Trump’s suspension permanently from Twitter. A 73% decline in one week in misinformation about the 2020 election, the number of posts containing misinformation fell by two and a half million. And honestly, I don’t think that’s all just because of Donald Trump. It’s because of all of the other accounts that got purged for spreading the misinformation, which is obviously seen as potentially inciting the insurrection that had happened in the days before the mass purge happened. So look, that’s a pretty strong argument for the people who say it’s okay to ban people from these platforms.

Now the anti banning crowd has an uphill battle ahead of them, right? I mean, in just seven days, they were able to prove that the ban worked, that the ban stopped most of the flow of misinformation. I mean, three quarters of the misinformation gone. How can you argue with results like that? Now look, I, me personally representing Farron Cousins, not Ring of Fire, I’m actually pretty okay with them purging Donald Trump. I am okay with them purging some of these other individuals that were also inciting violence, as I have always been okay with them purging people who do that. But just spreading misinformation? I honestly think you kind of have to draw a line somewhere. And I, I, as much as I hate to say it, misinformation is not necessarily a reason to get banned from a platform. If it were Fox news, CNN, MSNBC, Newsmax, One America news and 99% of the people on YouTube wouldn’t exist anymore.

Sorry, but you’ve all done it at one point or another. So yes, you do actually have to draw a line somewhere. And I think you have to draw it at, you know, right before spreading misinformation. And here’s why, Twitter, Facebook, all these other social media outlets that are banning people, they have to be broken up. They do have too much power. You think about the fact that just banning the president and, and certain individuals from Twitter resulted in any 73% decrease in misinformation, that alone shows you how powerful these outlets are, how powerful these platforms have become over the years, because they’ve just been allowed to grow and grow and grow and gobble up all their competitors and stick their little octopus arms in so many other projects, shutting out alternatives. Monopolistic behavior, right? And because of that, they get to do whatever they want. They can shut down ideas. They can shut down conversations. And yes, it is naive to think that they’re only going to shut down the bad conversations, right? They’re only going to get the conservatives. They’re only going to do the bad guys.

No. Go ask The Serfs. They actually had their YouTube channel just a couple of days ago, removed from YouTube for allegedly harassing an individual. And even that individual came out and said they weren’t harassing me, give them their channel back. So that was a horrendous ordeal that they went through. But that is the problem with it. That’s the slippery slope because they don’t even bother to check. They just say, okay, this, we got a flag here. Let’s take it down. Just kill the channel, kill the channel, kill the account, get rid of it here, get rid of it here. We’re not going to go through and check them. Somebody took offense to it. You know, we’ll, we’ll shoot first ask questions later, is their policy and that’s not okay.

Inciting violence is wrong and if you do that, you’re out. I have no problem with that at all. I mean, hell that’s what the first amendment says too. Anything short of that, you should still be able to have a voice. These tech giants should not be able to shut them down and in order to stop the tech giants from doing that, we may need to nationalize them, but we sure as hell need to break them up. And while it’s good that there has been a 73% decrease in misinformation, you can also bet that this new found power that they’re enjoying at the moment, it’s not going to stop here.