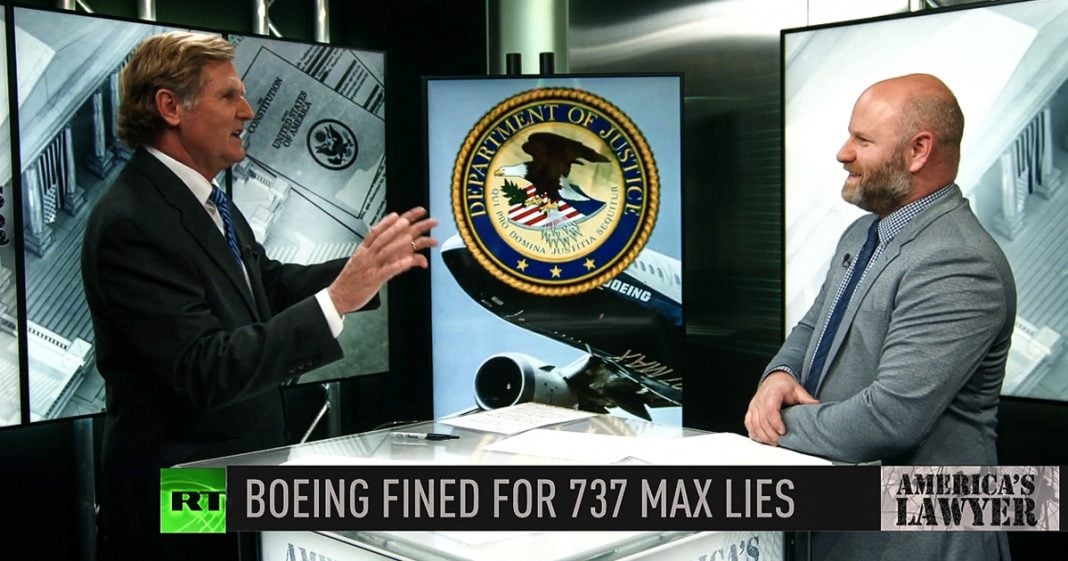 Mike Papantonio:             And finally tonight, some good news. Boeing has agreed to pay two and a half billion dollars to the DOJ for lying about the safety of their Boeing 737 max aircraft. Joining me again to talk about this is Farron Cousins. You know, I’m seeing by the way, before we get too much into it, I’m seeing a lot of Boeing advertisements like on MSNBC and CNN right now, which always tells me they’re getting ready for this. They’re getting ready for a new war. You know, every time I watch MSNBC with a Boeing advertisement or McDonnell Douglas, I’m thinking, am I really going to go buy a Patriot missile? Why are they advertising here? We know why they’re advertising now because the PR is so bad on this, isn’t it?

Farron Cousins:                  Yeah, it is, you know, two and a half billion dollars that they got to pay out the 737 maxs. We saw the major crashes in 2018/2019, 346 people killed in these crashes because even though they won’t admit to wrongdoing as part of their settlement, they lied about the safety of the electronic equipment on those airplanes, to the FAA. That’s, that’s what we know has happened and of course, again, it always infuriates me. They have to, they say, well, we’re not agreeing to wrongdoing, but here’s all this money.

Mike Papantonio:             Well, doesn’t it bother you that they murdered, you know, hundreds of people and nobody’s going to jail.

Mike Papantonio:             More or less nobody’s even perp walked. Nobody is even tried. There is no trial. As a matter of fact, as you look at this story, it occurred to you the same way it occurred to me too, two pilots are taking all the responsibility here.

Mike Papantonio:             Two pilots who said, well, we didn’t give all the information to the FAA on a, on a software program. Do you really think management didn’t know what these two pilots are doing? So they’re throwing these two pilots under the bus. They’re getting away with paying these couple of billion dollars. Nobody goes to prison. Nobody’s perp walked. It’s business as usual in corporate America, because they’re such a big defense contractor.

Farron Cousins:                  Right. And the only thing that is positive about this story is that a good portion of that settlement isn’t just going to the DOJ. It’s actually being set aside for the victims and their families of the people involved in the crashes. Usually what we see is a lot of it goes just straight to the DOJ.

Farron Cousins:                  And becomes DOJ fund money. So at least most of this is actually being set aside for the victims, but that’s about the only positive part.

Mike Papantonio:             Taxpayers will end up paying for all of it, because they’re going to claim this as a tax deduction.