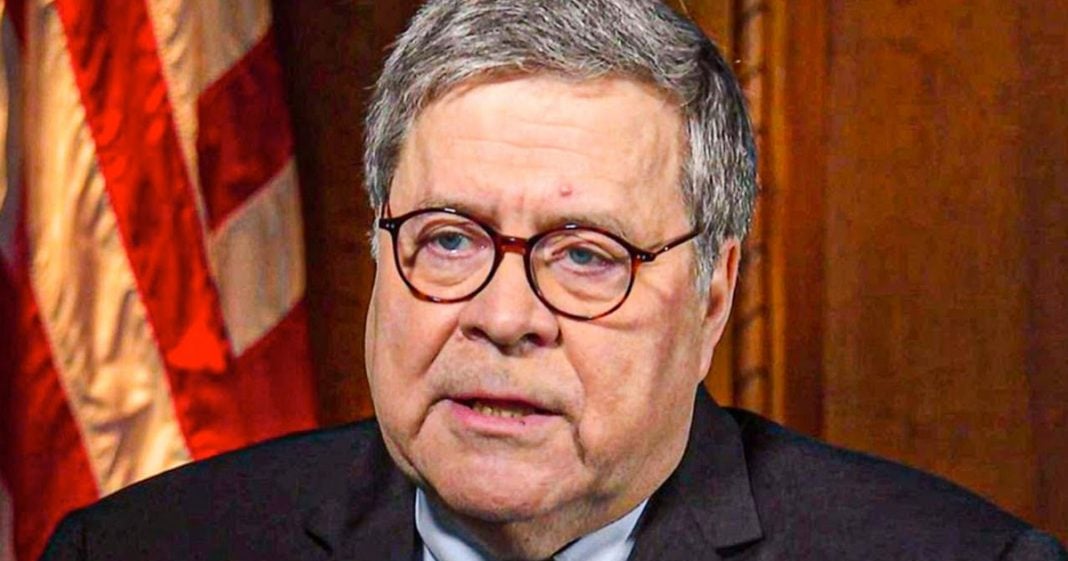 According to a new report by Axios, former Attorney General William Barr tried to tell Donald Trump that his legal team was lying to him about so-called election fraud, and that the claims they were making simply didn’t make any sense. Trump obviously refused to listen to reason, and Barr ended up resigning a short time later. Trump is so blinded by his arrogance that he is unable to see reality anymore, as Ring of Fire’s Farron Cousins explains.

A new report from Axios says that former attorney general William Barr, back in late November, I guess maybe early December, was trying to convince Donald Trump that his legal team, which at the time, as we all know, consisted of Rudy Giuliani, Sidney Powell, who was despite their claims very much a part of his legal team in the early days, Jenna Ellis, they were all the legal team and William Barr then attorney general was trying desperately to convince Trump that these individuals, this team of lawyers he had put together were absolutely lying to him about election fraud. William Barr understood because his own DOJ had looked into it because that is the job of the DOJ. Now, I just want to remind everybody at the time the DOJ had come out and said, we will look into any allegations of voter fraud. We will get to the bottom of all this and everybody on the left freaked out because you thought it meant William Barr was getting involved.

And we had to calmly remind everyone that no, the DOJ that, that’s literally their job, he’s not announcing anything that they weren’t already supposed to be doing. So relax and sure enough, hey, we were right. Wonderful, great. We didn’t need to freak out about that. And William Barr after seeing the evidence, or I guess you would say the lack thereof, told Donald Trump don’t listen to these clowns. These people are not being honest with you. And in fact, according to this Axios report, the language William Barr used was a little bit more colorful than that. Kind of, kind of language that it gets you flagged here on YouTube. So I’m not going to repeat it. But yeah, William Barr apparently was angry, was unhappy that Donald Trump was listening to these crackpots, you know, Sidney Powell and Rudy Giuliani instead of his own DOJ. And that’s what caused that final rift between Trump and Barr and why Barr ultimately, according to this report, ended up resigning early.

Now here’s the thing, Donald Trump, this is what this story tells me, Donald Trump would rather live in his alternative reality than accept the advice of somebody trying to protect him because that’s what William Barr was doing. William Barr wasn’t doing this because he even had a dog in the fight. William Barr was doing this to try to protect Donald Trump, trying to say, listen man, I’m coming at you as your friend. I’m coming at you as a guy that’s associated with you here. A guy that’s been by your side that has, you know, basically misled the public on so very many things for you and I’m even telling you this is BS. It’s one of the phrases he used. Please drop it. And Trump wouldn’t drop it. Trump was so invested in the lie, you know, he had put his entire reputation into the lie that he couldn’t back down at that point.

He had, as his niece Mary Trump had said at the time, gaslit himself into actually believing the lie and William Barrs over here in reality, with his DOJ and with his mountain of no evidence saying there’s nothing there. We’ve looked at the claims that they’re making. We can’t find anything to substantiate it. This is ridiculous. This is ludicrous. They are feeding you lies, lies that William Barr said again, according to the report, don’t even make sense. Like these lies wouldn’t even be possible is what Barr told him. But Trump’s ego wouldn’t let him listen to Barr. So he spent the final two and a half months of his administration destroying any goodwill he may have still had with the American voters to the point where his approval rating today is 29%. Going to leave office as one of the least popular presidents ever. He’s now been impeached twice. Oh, and by the way, he’s still facing a trial once he’s no longer president of the United States, all because he couldn’t take William Barr’s advice the one time William Barr was actually trying to be a decent human being, possibly throughout his entire life.