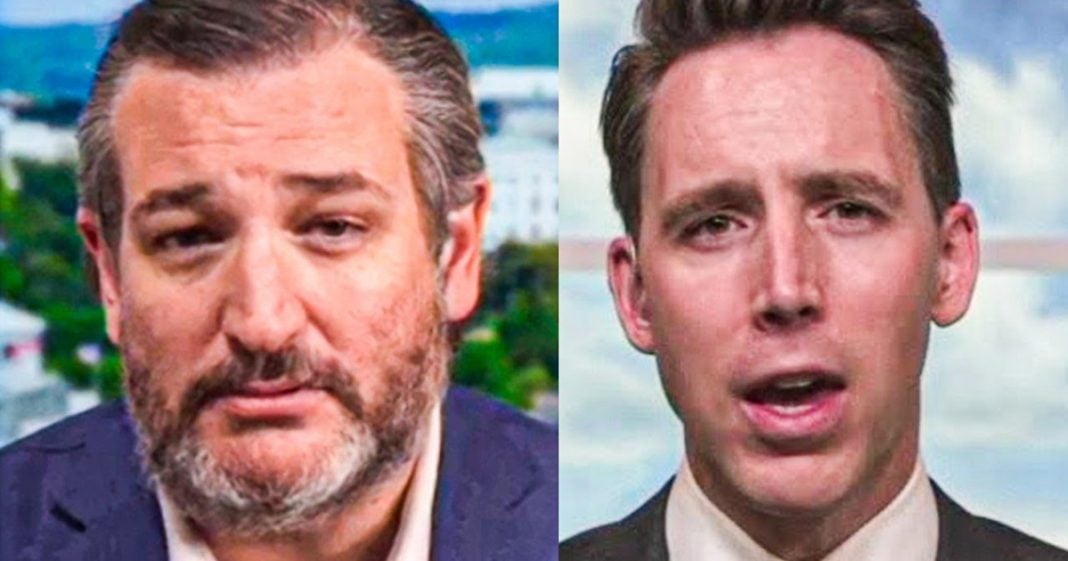 Law professor William Eskridge, who had the unfortunate experience of teaching both Ted Cruz and Josh Hawley, says that both men clearly didn’t pay attention during school or else they would have known that their challenges to the electoral college were bogus. Ring of Fire’s Farron Cousins disagrees with the good law professor, arguing instead that both men know they were lying, they just didn’t care.

Late last week, a law professor by the name of William Eskridge wrote an op-ed where he not only talked about the fact that he taught in law school, Ivy League law school, by the way, Ted Cruz and Josh Hawley, both of them, but he also said the two clearly weren’t paying attention during any of their lessons. Because one of the things that professor Eskridge taught these two men was about election law here in the United States. So he pens this op-ed and says, clearly these men didn’t learn a thing. They weren’t paying attention. Otherwise Hawley wouldn’t have gone on the floor of Congress or the floor of the Senate, excuse me, and said such asinine things as Congress should have decided how Pennsylvania votes, whether or not vote by mail is legal for Pennsylvania. And Eskridge correctly points out, as we have also pointed out plenty of times, the constitution explicitly says the States, each individual state is in charge of deciding 100% how they run their elections. Nobody else gets a word at all. That’s it. And Hawley, you know, I guess forgot that, according to Eskridge.

Now, I have the utmost row, of respect, excuse me, for professor Eskridge here. I disagree with his premise. I do not think for a second that the reason Ted Cruz and Josh Hawley or any of these Republicans put up objections is because they legitimately forgot what the law was or because they actually believed there was massive fraud. I simply do not believe that they believe that. But they believe that their base is dumb enough to believe that. And yes, folks, that is what they believe. They think their base, they think their constituents are stupid. They do. And if you’re watching this and you’re a constituent of one of these two men and you voted for them, well congratulations. You voted for the guy that thinks you’re an absolute drooling, moron. That’s why they go out and say these things, folks.

And honestly, it’s not just reserved for, for Hawley or Cruz. It’s not even just reserved for Republicans. Anytime you hear a politician say something that you know is blatantly false, easily verifiably false, it’s because they believe the rest of their constituents are brain-dead idiots. That is the, that, that, that’s it. Look, I just explained American politics to you in the most succinct way as possible. They think you are stupid. Five words. That’s American politics today. They think you are stupid. And that’s all you need to know about most politicians. That’s why they say the things they say. That’s why they go out there blatantly lie to your face because sure, if you’re watching this, you’re politically in touch, right? You know, you’re, you’re a news consumer. Well guess what? Most of the public isn’t and if they are, they’re probably getting it from someplace like Fox news or Newsmax that feeds them lies all day, but they dare not venture outside that bubble to see what the real world holds, because it would destroy their worldview.

So they only seek out news that reconfirms what they believe and what they believe is nowhere close to reality. And these politicians take advantage of that. Mostly it is the Republicans who take advantage of that. They know that their base is not ever going to fact check them. And they know that their base is never going to believe the actual fact checkers. So that’s why they’re able to get away with these ridiculous lies. It’s not because they didn’t pay attention in law school. It’s because they did, but they know that their base didn’t even go to law school so they can get away with these ridiculous lies.