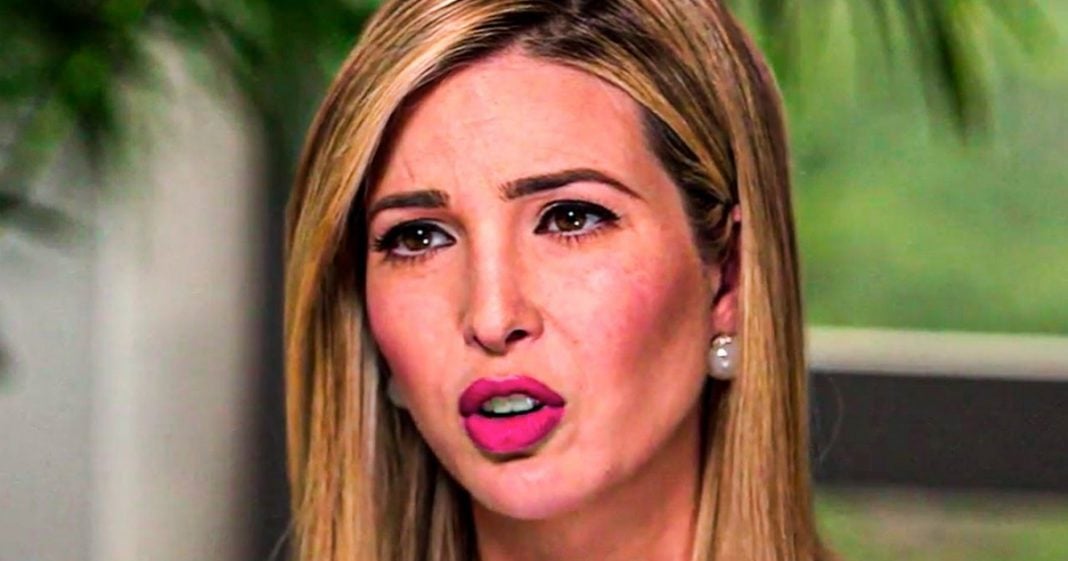 According to new reports, Ivanka Trump is allegedly panicking during the final days of her father’s administration because she believes that he is destroying any chance she may have of running for office in the future. While it is true that he is toxic for people and their political careers, Ivanka needs to be worried about more than just her daddy hurting her future endeavors. Ring of Fire’s Farron Cousins discusses this.

According to sources from the white house who spoke to CNN late last week, both Ivanka Trump and Jared Kushner are panicking over their own futures. And no, by the way, it’s not because of that report that came out, showing they made the secret service pay $3,000 to rent basically a toilet because they didn’t want to share a bathroom with them. No, no, no. They’re panicking right now because they’re concerned that Donald Trump, Ivanka’s daddy, has ruined their careers, has destroyed their futures. You know, whether Ivanka wants to just continue on with her brand, if that’s even still a thing, or if she wants to move into politics, she is panicking because she believes that daddy has now ruined that for her. As for Jared, I don’t know why he’s panicking, right? I mean, his dad actually had, had to get a presidential pardon from Ivanka’s dad, like we know he’s got a really shady, horrible history.

And apparently that didn’t bother anyone. And he was still able to go on and find a lot of new wealth, to put it as, as nicely as possible. So I’m not understanding why Kushner is panicking. And to be honest, I’m not exactly sure why Ivanka is panicking. Daddy didn’t do anything that you weren’t right there by his side to condone. Like, all the horrible things that happened from Trump, yeah, you were there. You, you, you were a part of it Ivanka. You, you stood by his side. Not to mention the fact, if we’re to believe reports that you may want to move down to Florida and run for office, let’s not forget that you have the charisma of a box turtle. Now, that’s not meant to be offensive to box turtles. I love turtles, but Ivanka has no personality. She has no real beliefs.

Not really easy to get a gauge on what the hell she even believes as a person, where she stands, what she would do. Nevertheless, as I’ve repeatedly said, I do think if she came down here and ran against Marco Rubio, she’d destroy him. He is absolutely pathetically weak and not very smart. So yes, he’s easy to beat in a primary, but he’s going to be replaced if it’s with Ivanka, by somebody who’s only marginally more charismatic and intelligent. And again, that’s not because she just went along with everything daddy did. It’s because of who she is as a person. Now she inherited a lot of things from her father, mostly money, his charisma, his ability to manipulate people, she didn’t get that. Don Jr. didn’t really get it either. But out of all the kids, he has the most of it. Eric didn’t get any of it.

Eric is at the shallow end of the gene pool. He’s basically in the kiddie pool of the gene pool at this point. So yeah, they don’t have what he had to go out there and be able to find the success in the way that he had. But she’s going to sit there and she’s going to blame him forever. And I just don’t think that’s fair. Yeah, to, yeah, certain aspects of it, sure, Trump is responsible for it. But she is, she was by his side, every step of the way. She can not separate herself from the things her father did. She can not separate herself from the things her father said. And she can’t separate herself from the events of January 6th. She was there with him every step of the way. So to blame him for destroying her potential career after leaving the white house, nah, that’s cheap. That’s taking the easy out. That’s her not having to accept blame for what she’s done. And hey, I guess in that regard, there’s something she did get from daddy. The inability to accept blame for her own actions.