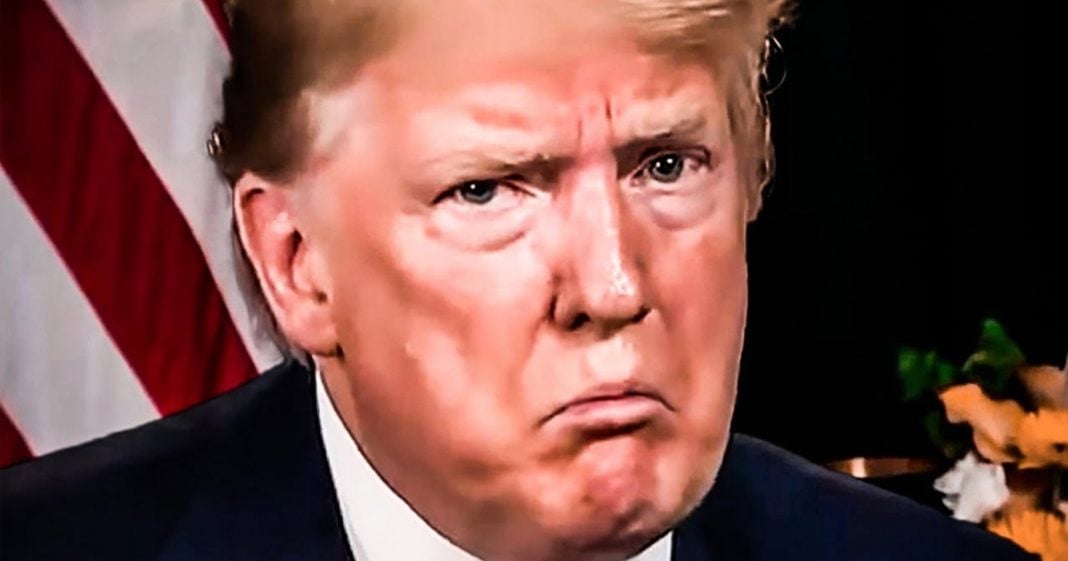 According to new reports, aides to the President have officially said that they are giving up trying to rein in or even comfort Donald Trump after his second impeachment. With just days to go in his presidency, aides say that the President is just whining about the impeachment nonstop, and there is nothing that they can do anymore to cheer him up so they aren’t even trying. Ring of Fire’s Farron Cousins explains what’s happening.

There’ve been lots of reports that have come out this week about Donald Trump’s white house staffers. We have reports about them not being able to find jobs. We have reports about them being angry at the president for not caring that they can’t find jobs. And the latest report out this week, because news is just changing so rapidly is the fact that these staffers have just given up following Wednesday’s impeachment. Uh, according to a report by the daily beast, the white house staffers have finally thrown their hands up and been like, you know what? I don’t even care anymore, no longer trying to fight Donald Trump. They’re no longer trying to placate him. Uh, they have said, according to this beast article, they have no fight left in them. They’re beaten down, they’re broken. They’re just ready for all of this to be over. And you know what?

They’re getting their wish, right? Uh, because moving trucks have been at the white house for a couple of days. Now they’re getting Trump stuff out. This, uh, staff is going to have to move on, you know, to whatever it is that they’re able to find out there. Uh, which again, we’ve been worn in here for four years. It was going to be hard to find a job because of the stench of trucks you made the decision to stay. But they also say that ever since the impeachment he’s been walking around, he’s been whiny. He’s been complaining. And in the past they had said that what they did was they tried to distract him. You know, they would print out positive news stories about him and present them to him and say, here, look, people still love you though. They would turn it on to Fox news and be like, look, look, look, watch this segment.

They’re really, really loving you out there. But now they’re just like, I don’t care. I don’t care. Be whiny, be moody, be depressing. You know, act like a 2004 emo kid. If you feel the need for it, go lock yourself in your room and listen to simple plan. Donald Trump. They’re tired of it. Good for them. Here is what I actually recommend. At this point, you got days left. You do not even have a week left leaf leave right now. It’s not going to hurt your chances of finding another job. If you’re truly miserable, don’t just say, well, it’s only another week. Leave. Just leave. It is a toxic situation. Even though as I’ve said, you know, I’ve run out of sympathy for you. I do understand that that hurts you. You psychologically, uh, not saying now, but the situation you’re in hurts you psychologically. We’ve all been there with the bad job thinking, you know what? I’m going to leave tomorrow. I’m gonna leave tomorrow. I’m going to leave the next day. I’m gonna leave the next. I’m gonna leave the next day. Just do it. Just cut the cord, cut the ties, get the hell out of there and be done with it and move on with your life. And I promise you y’all do that. Things are going to feel a lot better for you emotionally, physically get rid of the toxic relationship that you were in with the president. And suddenly things won’t seem so bad.