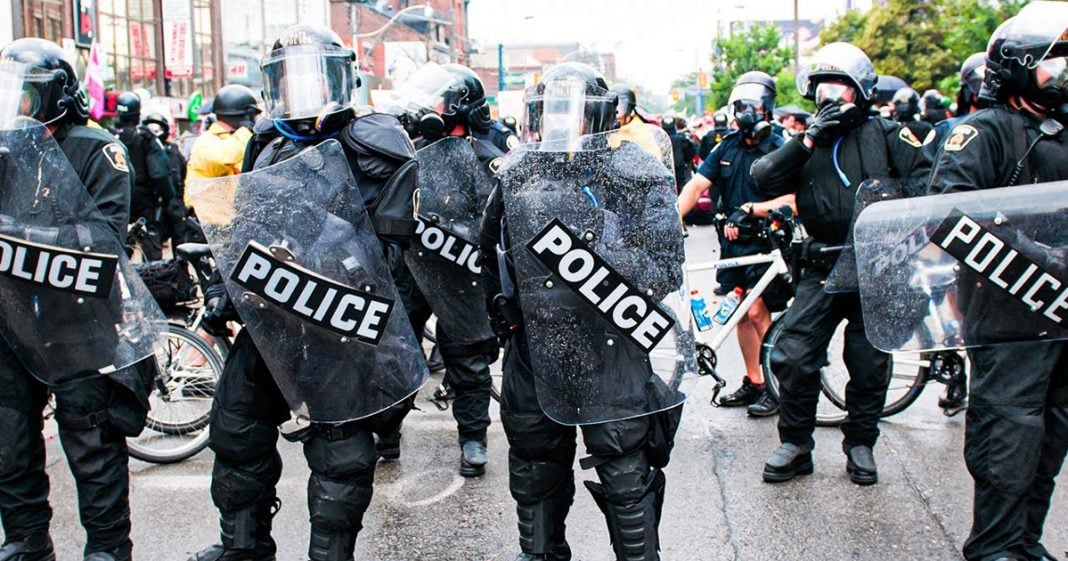 According to law enforcement statistics, police in the United States are three times more likely to use force against left wing protestors than they are right wing protestors, regardless of whether or not the confrontation turns from peaceful to violent. These are their own numbers confirming this, so there’s no denying this very sad reality of the United States. Ring of Fire’s Farron Cousins explains why this discrepancy might exist.

Newly updated statistics available this week. Show that over the last 10 months, since April of 2020, there’ve been more than 13,000 protests across the country. Some left-wing protests, some right-wing protests, but no matter the protest and what it was about, um, whether it was peaceful or violent, there was a big discrepancy between the amount of violence police used and they were more than three times likely to use violence against left wing protestors. Then they were against right-wing protesters. Uh, here it is. Let me read this from the guardian police used tear gas, rubber bullets, beatings with batons and other force against demonstrators at 511 left wing protests and 33 right-wing protests since April, according to updated data made public this week. So 511 times versus left-wingers versus 33 times for right-wingers. They continue, uh, for left-wing demonstrations, that was about 4.7% of protests. While for right-wing demonstrations, it was about 1.4%.

Nothing. If you didn’t do the bad thing, things, you’re more likely to get your kicked by a cop versus Republicans who didn’t even measure a full percent when they were totally peaceful. He here’s the issue. We know some of the discrepancies here is obviously the left wing protests, uh, given the causes that they protest for, you’re going to have a lot more racial diversity. And that is probably the biggest influencer on whether or not the police are going to use force or violence. You see more non-white faces in the crowd. Absolutely. They’re going to go for it. Sorry. The data doesn’t lie. Other reasons why that could possibly, you know, or that could possibly, excuse me. Good grief. Uh, that could possibly explain the discrepancy even further is because obviously left-wing protesters are challenging. The status quo. No, we want to change the way things are for the better.

We want things to be better. We want institutions to be better, but in order for them to be better, we have to get rid of the bad actors. And a lot of that starts with the cops. So there’s a lot of anti-cop sentiment among the left, which leads to lot of cop anger on the other side. And they take that anger out on these protesters, even though then matter how you feel about the people. You gotta be neutral on the right wing side. As we saw last week in one of those videos, one of those angry Trump supporters told the cop, like we protect you. You know, we were there for you in the protest. We supported you. Why are you not letting a storm? The Capitol it’s crazy, but that’s the way it is. It’s a cultural problem. It really, and truly is a cultural problem inside police forces across the country. This is across the country, the people that are attracted to this job. Sure. Not all of them. Sure, sure. Um, it’s a certain kind of person and we’re starting to see more and more what kind of person that is, and that has to change. And we’ve got dozens of cops that were present as Capitol stormers last week. That’s what this is attracting. And that’s why these numbers are so disgusting. If we don’t change that culture in police society here in the United States, then these numbers are only going to get worse.