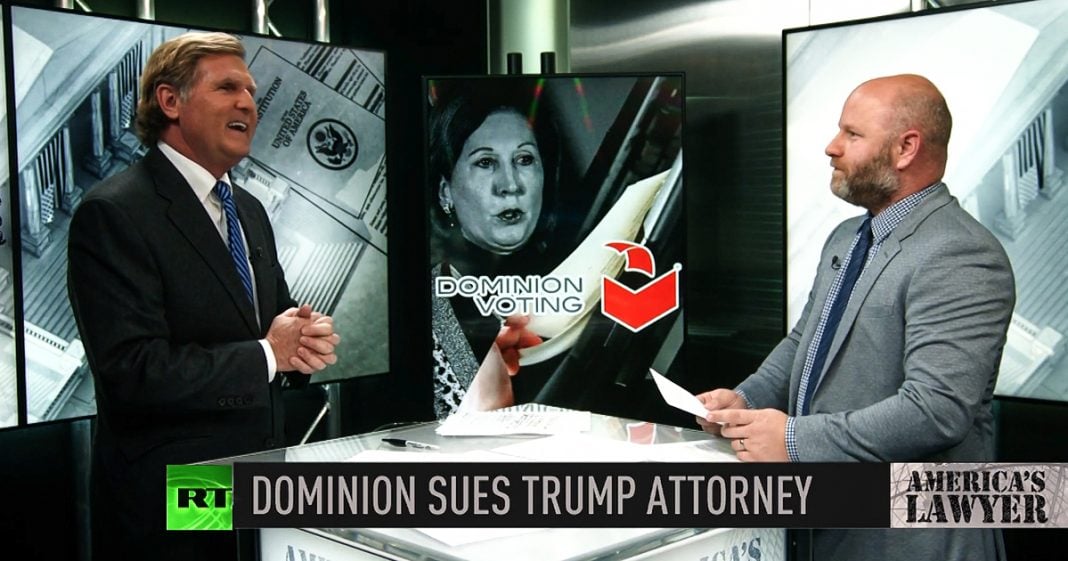 Mike Papantonio:             A pro-Trump lawyer is now facing, actually $1.3 billion, kind of a defamation lawsuit by, by a voting software company after her election challenge went bad. Okay. Here’s this, here’s this lawyer who says, she creates this movement in the United States and the movement is there’s been a big cover-up, but she goes after Dominion voting machines. Okay. And Demoin, Dominion says, okay, what are you talking about? There’s been what, six, six judges who have looked at it, she’s filed these federal pleadings. Six judges have looked at and said, no, there’s, there’s not, there’s not a scintilla of information you’re giving us to, to believe that there’s some conspiratorial element with Dominion voting and their effort to, to, to change the election results.

Farron Cousins:                  You know, what, what has stood out to me the most about all these lawsuits is, is not only the fact that one, you have Trump appointed lawyers or judges, excuse me, who’ve thrown the cases out because they have no merit. But two, is that Sidney Powell, Rudy Giuliani, and these other, you know, up-front lawyers refuse to share all of the so-called evidence that they had with the actual Trump lawyers from the campaign. You know, the Trump actual lawyers from the campaign went up to them and they said, listen, you say you’ve got all this wonderful evidence and you’re going to release it. Can you please share it with us? So that we’re all on the same page and we know what we’re working with. We’re his real lawyers. And every time they said, no, no, no, no, you can’t have it.

Mike Papantonio:             It wasn’t, it wasn’t there. Okay. What, what I, I think back to this story early on, you had these lawyers that were standing behind her, you know, this, this Sidney Powell and, you know, she’s our leader. They started leaving the ship like rats on a sinking ship because they saw the same thing that Dominion sees. And that is okay, look, you can file a lawsuit. Great, file the lawsuit. If there’s a scintilla of information that is warrant, that warrants discovery, you can go for it, go for it, take depositions. You can do all that. But they have done more than that, you see. That, this, this lawsuit doesn’t protect them. They don’t have a protection to say, well, we have the right to bring a lawsuit. The defamation case is more focused on what they did outside of the courtroom.

Mike Papantonio:             What they said outside the courtroom, the way that they characterize Dominion voting company as being, just being a thug.

Farron Cousins:                  Right. Saying they were in bed with Venezuela and Hugo Chavez and that somehow Dominion bribed Republican officials in Georgia to look the other way when their algorithm switched votes from Trump to Biden. I mean, this is to call it anything less than a conspiracy theory, you know, it just wouldn’t be accurate at this point. That is what Sidney Powell was claiming publicly. You know, not necessarily in the lawsuits because again, if she claims it in the lawsuit, well, Dominion you really can’t do much about that. She’s alleging it. You defend it, whatever. But saying it in public, giving these press conferences, along with the media that amplified her and the media for the record, you know, to their credit, they got their cease and desist and they ceased and desisted.

Mike Papantonio:             And so at least they had enough sense to say, ah, this woman is a little squirrelly. And so, so, so here’s, here’s where it really gets interesting. She may be sitting there thinking I’m protected. I got a first amendment right to say what I say, and maybe she’s going to be protected under New York Times versus Sullivan. Maybe she’s going to have some, some, some protection there. But the real point, the real point comes in where she’s not really protected outside of the courtroom when she says things that there’s no basis for. I mean, this company said that they’ve paid more than $500,000 for security for their employees who have been threatened.

Farron Cousins:                  That’s, that’s another part of the story that, that’s been overlooked by so many is the fact that her words and her actions are causing these regular everyday employees of Dominion to receive death threats. You know, they’re terrified for the safety of their family, especially after what we saw happen in the Capitol last week, they know these people aren’t joking around anymore. You know, these are very serious threats to them. So yes, because of what Sidney Powell has said and done, Dominion is, is upping security for their staffers and, you know, trying to keep them from being killed just because they work for Dominion. And so look, we’ve been talking for decades about voting machines and the problem with voting machines. So let’s be honest, we’ve known there are problems with these systems. Absolutely no question about it. That needs to be addressed and it needs to be investigated. Maybe we can build a consensus now that Republicans are mad too.