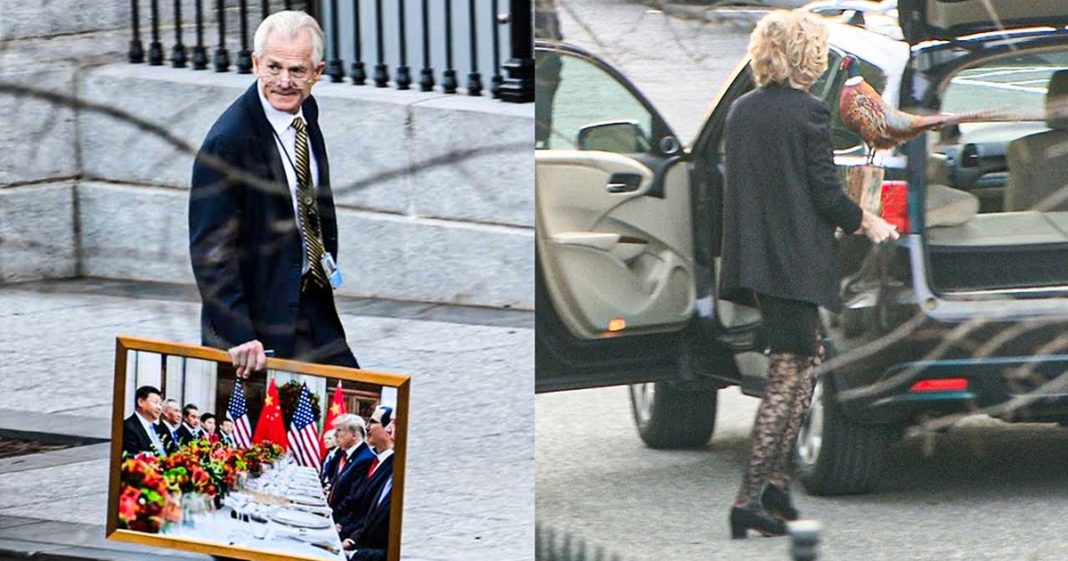 Based on the pictures that emerged late in the week, it would certainly appear that members of the Trump administration are looting the White House before Trump moves out. There are actually rational explanations for why some of the items are being removed, but others have no reason to be leaving the White House and certainly not by the individuals carrying them. Ring of Fire’s Farron Cousins explains what’s happening.

Pictures started emerging from the white house on Thursday that showed Trump administration officials walking out the back door with artwork and other decorations that, uh, really seems like these people should not have had in their possession. The pictures, uh, on the surface told the story that Trump officials were in fact looting the white house. And that was the, uh, I guess, theme that seemed to prevail. It won the day. And that’s what everybody thought was happening was that these Trump officials were looting the white house. Well, unfortunately that’s not entirely true, but it’s also not entirely false. Here’s an explanation of some of the things that happened that day. Uh, first and foremost, you had, uh, I think it was Jake Tapper was tweeting out like all these pictures, like, Oh, they’re taking more stuff, they’re taking more stuff. Well, it turns out the one thing that Tapper tweeted out the bust, you know, they were taking a bust of Lincoln out of the white house, um, that was actually loaned to them by a museum. And it was being returned to the museum.

See every incoming president’s allowed to go there. They pick out these, uh, you know, historical artifacts that they then get to decorate the white house with when their term is up. They take them back to the museum. That’s what that was. They were not stealing the bust of Lincoln. As far as we know, uh, another one picture of some kind of stuffed bird being carried out by a woman and put into the trunk of a car. Uh, the bird was also likely from the museum, although that’s not a hundred percent, uh, we’ll get more to the bust and the bird and just a moment. But then we have the big one that actually does appear to be looting. And that is Peter Navarro walking out of the white house with a painting of a Trump and a GGN ping from China as part of their, I guess, tariff talks and Navarro is just holding it. Like he just walked out of hobby lobby with it, walking down the sidewalk. Now that ladies and gentlemen is not actually a historical artifact loaned to them from the museum. That is in fact something that was created during Trump’s tenure.

So Navarro doesn’t have claim to that. And he can’t say, Oh, it was taking it down to the, down to the trunk. We’re going to swing by the museum on my way home. Yeah. That’s not that doesn’t go back to the museum. So unless Navarro is the one who paid out of pocket to have that painting, uh, done and paid for the frame and all of it out of pocket, unless that is the case, then it would appear that Navarro might’ve been looting, that particular painting. Here’s the thing. Even if every one of these things being taken out of the white house on Thursday was in fact, headed back to a museum. And none of it was being stolen. I have a question still, why are we having white house staffers in business attire, moving stuff? You mean to tell me we can’t get, you know, we got a $740 billion budget for the military, but we can’t afford two men and a truck.

Really. We can’t afford to get a U haul for the day. Like the, the, the woman with the bird she’s loading the trunk of some kind of hatchback there. What the Hell? This Is the most like half move I’ve ever seen. It’s like a bunch of, uh, college kids moving from one apartment to another. You just get everybody, you know, that has a truck. You throw the crap in there, you pay them with a pizza and some beer. And you go on with your life. Like, is that what happened at the white house? Like why would Peter Navarro need to be moving things? I Would think they could hire people for that. Like, there is an entire industry built around doing that thing, moving, maybe throw some money to those folks, help out the economy a little bit. So it doesn’t look like you’re stealing everything out of the white house.