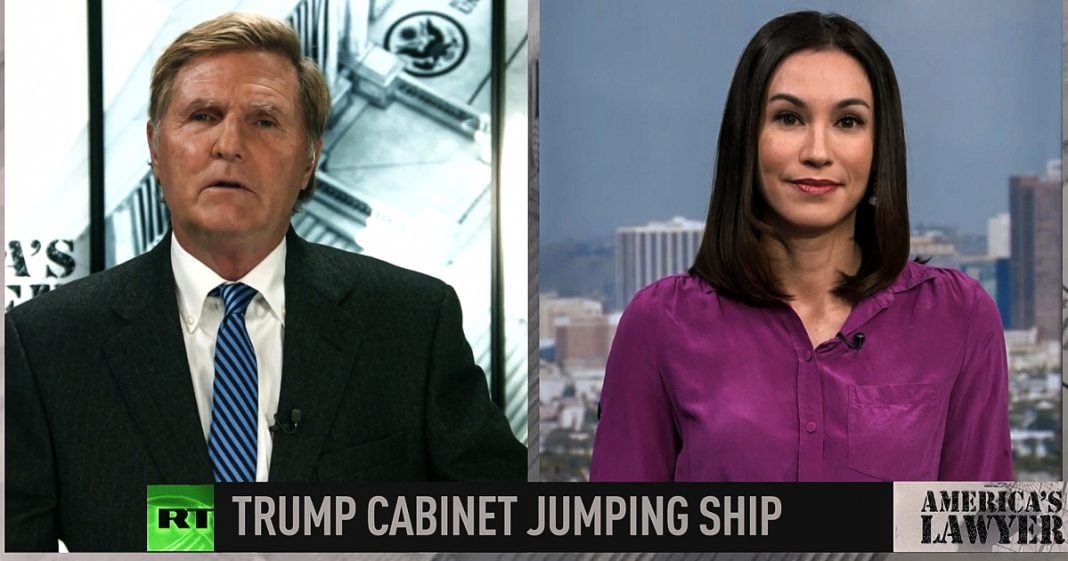 Via America’s Lawyer: Members of the Trump administration have resigned one after the other in the aftermath of last week’s violent insurrection at the Capitol. RT Correspondent Brigida Santos joins Mike Papantonio to run through a list of senior cabinet members who have made an early exit, condemning Trump for inciting extremism.

Mike Papantonio:             This week, a third cabinet member has resigned in the aftermath of last weeks siege on the US Capitol. Brigida Santos joins me now to talk about the details here. Brigida, right off the bat, which of president Trump’s cabinet members have resigned so far?

Brigida Santos:                   On Monday acting Secretary of Homeland Security Chad Wolf announced his departure in a letter. Now, rather than mentioning the siege on the Capitol as the reason, he says his decision is, “warranted by recent events, including the ongoing and meritless court rulings regarding the validity of my authority as acting Secretary.” Now that is in reference to a federal judges ruling last week, that Wolf’s appointment in late 2019 was illegal because it violated the rules of succession after the departure of his four predecessors. The judge’s ruling effectively blocks a set of immigration restrictions that were scheduled to take effect this Monday. In addition, Trump’s Education Secretary Betsy DeVos and Transportation Secretary Elaine Chao have also resigned. In an email to staffers Chao says, “Our country experienced a traumatic and entirely avoidable event as supporters of the president stormed the Capitol building after a rally he addressed. It has deeply troubled me in a way that I simply cannot set aside.” And Betsy DeVos’ resignation letter addressed directly to president Trump says, there’s no mistaking the impact your rhetoric had on the situation and is the inflection point for me, Mike.

Mike Papantonio:             Well, yeah, what I find interesting about it Brigida, is that it’s not only his cabinet that’s pointing out, it’s world leaders. Cab, just clearly pointing out look, Trump, we know what you did. You’ve meant to incite this kind of craziness. You, you, you worked on it for weeks to get them, get all these folks there, to get them all ginned up to do this. World leaders are saying the same thing the cabinet members are saying. The bothersome thing to me is some of these cabinet members knew what this, what Trump was about going into to serve on this cabinet. And now they’re simply trying to save the rest of their career. Has anyone else resigned from the Trump administration in the aftermath of the violence on Capitol Hill that, well, first of all, who do you see coming? What, what’s next?

Brigida Santos:                   Well, I’m not sure who’s next because, you know, it changes minute to minute, whether people are going to remain loyal or not. If it’s politically beneficial for people. But so far, Mick Mulvaney, Trump’s former chief of staff who went on to serve as the special envoy to Northern Ireland has quit. Other administration officials who’ve also resigned include the deputy press secretary, the first lady’s chief of staff, the deputy national security advisor and officials from the department of commerce. But early on, prominent Republicans warned about the dangers of Trump’s rhetoric, which you just mentioned. And those people include Rick Perry, who prior to the 2016 election reminded voters about an 1854 assault on the Capitol, saying Donald Trump is the modern day incarnation of the nativist movement that led to that siege over a century ago. But despite his own warnings, Perry then went on to work as Trump’s energy secretary. Ted Cruz and Marco Rubio also previously accused Trump of fomenting violence and then they of course, went on to support the president. So the signs have been there from the very beginning and after standing by the president and listening to his rhetoric for years, critics accused these career politicians of now quitting to save their reputations.

Mike Papantonio:             Well, you know, if you look, the, the story is that threats really weren’t taken seriously, when Congress met to certify the election to begin with. Are they being taken seriously now? It seems like now as the inauguration day approaches you start hearing well, there’s going to be, there’s going to be these demonstrations in, in, in, in all the capitals across the United States. I still don’t know that people get it. I don’t know that people that should know better understand the damage that this is doing to democracy. What’s your take?

Brigida Santos:                   Yeah. I don’t know that they understand that either. And at least this time it does look like the authorities are taking this more seriously. You know, the national guard says that at least 10,000 troops will now be deployed to Washington, DC by this weekend. Federal law enforcement officials are also advising local police agencies to increase their presence at city and state institutions, many of which have already been boarded up in expectation of this happening. The Washington monument has temporarily shut down and a non-scalable fence has now been erected around the Capitol building. But according to the FBI, armed protests have been planned at all 50 state capitals between now and inauguration day. And since those very real vulnerabilities were exposed last week, people are now worried that things are going to get worse across the nation. So we’ll have to wait and see how this all plays out.