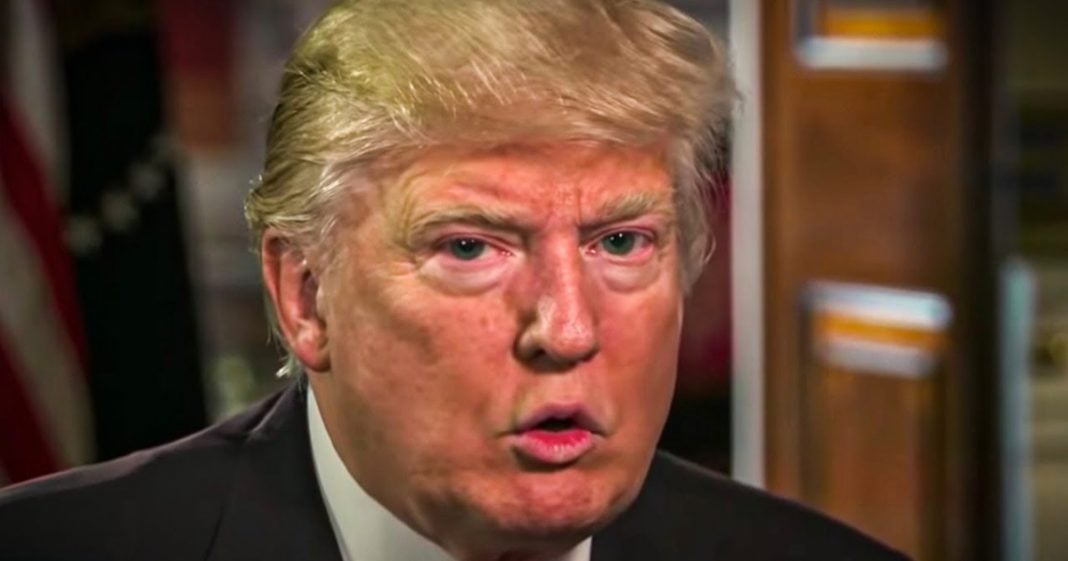 Deutsche Bank has announced that they are no longer going to be doing business with Donald Trump, and that’s not a good sign for Trump. The bank has been cooperating with investigators, and after all of that they have decided that either it isn’t worth it anymore, or they know that they won’t be “able” to do business with him in the future. He’ll still be on the hook for the more than $300 million he owes them, however. Ring of Fire’s Farron Cousins discusses this.

Deutsche bank announced this week that they are officially done. They are breaking up with Donald Trump. And once he leaves office, even though he still owes them $340 million, that he is going to be paying back, they say, uh, but yeah, other than that, they’re done with him. He can no longer come to us for money. We will not be doing business with this man ever again, but he does still have to pay us back the 300 plus million dollars that he owes us. Now, here is why this is so significant. They’re about one of the only banks willing to loan Donald Trump money. You see, as it turns out folks, uh, regardless of how he has hyped himself up, turns out Donald Trump is actually a very risky investment for banks. Why? Because so many of his projects have ended up in bankruptcy. Uh, yeah. So banks don’t really like to take that risk on him because the risk is greater than the reward.

So Deutsche bank was one of the few banks that was still willing to, Hey, yeah, come on. We’ll give you a couple of hundred million, no problems there, bud. Now here’s another thing. And this is probably what’s weighing on their minds a little bit more heavily. Deutsche bank has been at the very center of the investigations into Donald Trump and his businesses and his taxes and his finances and all of that. And the banks probably a little bit tired of scrutiny. So that leaves me with one of two options here as to what’s really taking place. I don’t think it’s just, Oh, you’re too risky and investment. Oh no, nah. It’s either one, dude. You’re bringing down us. You’re bringing us down publicly. The publicity around you is bad. You’re just not worth it. We’re going to drop you. It’s a hassle, you know, Oh, we’ve had to deal with these subpoenas.

We are cooperating by the way, with all these investigators and by God, we don’t want to have to keep doing this. So we’re dropping you, you know, you’ve taken up so much of our time with all this. So goodbye. The other reason, and this is the one I’m more hopeful about is that Deutsche bank is making the decision now to make it seem like, Oh, we decided to cut ties with him long ago because they know something bad is about to happen to them. And they don’t want to be the bank that goes down with him. They want to be the bank that said, Hey, listen, look, when we found all this out, we dropped them immediately. Because again, they’ve been working with investigators recently and now they’re saying, you know what we’re done? So the bank may have just learned something that they didn’t otherwise know.

And that to me probably seems like the most likely scenario, given the circumstances right now, the bank just learned a whole heck of a lot of information, especially if we are talking about, you know, any kind of fraud on behalf of Donald Trump, if he lied to the bank about his net worth in order to get the loans. Yeah. That would them off enough to be like, Hey, okay, first of all, it’s a felony. You’ve committed there. Uh, second of all, you lied to us. She broke the trust we are done with you have fun in prison. Well, this is one of those only time will tell situations, but hopefully time will tell us pretty quick, because this is one of the stories I definitely want a resolution to because it’s been going on for so long. We as a public, we deserve these answers. And hopefully very quickly after this man is out of office, we’ll start getting them.