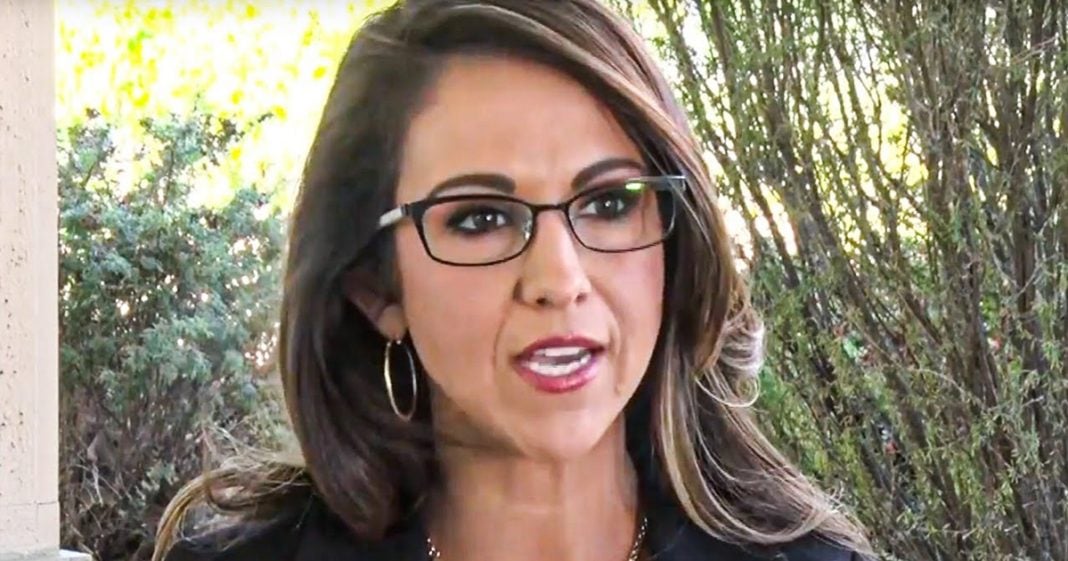 Freshman Congresswoman Lauren Boebert is quickly making a name for herself, but it isn’t because she is a beacon of integrity or sanity. Boebert has emerged as yet another loony Republican who has no business being in office, and she proved it again this week when she said that it was the fault of both Democrats and Hollywood elites that there is so much divisiveness – and she says this is what spurred on the riots at the Capitol last week. Ring of Fire’s Farron Cousins explains Boebert’s insane comments.

Freshmen Republican, Congresswoman Lauren Boebert is facing calls for her resignation, or at least her centering her expulsion from Congress, whatever it is over the fact that she was live-tweeting essentially the location of Nancy Pelosi, uh, during the insurrection that took place last week. Uh, so she issued a statement this week where she pinned the blame for all of this divisiveness. And I’m assuming that also includes the insurrection on Democrats and Hollywood. That’s right. It’s not the horrendous statements of the president. It’s not him goading, these, uh, unstable people into doing this. It’s not people like Boebert who released idiotic, psychotic ads of I’m going to carry my gun to Congress in which you go and do to Chicago, man.

Yeah. Lot of good that did you write during the insurrection? I mean, hell if ever there was a time when you might need to get out there and, you know, be ready, uh, Yuran and head. Um, so I guess that gun really didn’t do any good. Did it? Oops. Nevertheless, Boebert releases a statement. She blames Democrats, she blames Hollywood. Uh, and she also says, by the way, I didn’t, uh, I wasn’t live-tweeting, uh, her location because they were also broadcasting it on the news. Okay. Well that actually raises even more questions if they were in fact doing that on the news, which they weren’t, um, why would you feel the need to live? Tweet it though? Why would you need to put it on Twitter? Cause he, the people on the insurrection, they had their phones, so they had very easy access to Twitter. It’s a lot harder to stream news and, and watch that while you’re trying to insect, but looking at Twitter real quick. Yeah. You know, see, especially if they have notifications set up so they would get an alert anytime you tweeted. So yeah. Yep. Still seems like you were doing something a little diabolical there.

Here’s your statement about Hollywood? I denounced the violence over the summer just as I did the recent events at the Capitol. I defended our constitution and I always will. America will persevere because freedom always prevails, but let’s get real. The far left and their policies are causing harm to our country. I refuse to let their political machine write a narrative that millions of Americans know is false. Her statement also included the names of Democrats and celebrities who have encouraged mob violence. This includes president Barack Obama, president elect Joe Biden, Madonna, Robert DeNiro, and Johnny Depp. Would you write this memo from the nineties? All they’ve got Madonna and Robert de Niro. Cool. I guarantee you a lot of millennials don’t really know what those names mean.

Really Kind of dating yourself there and you don’t even look like you’re you’re that old, but um, liberals, Democrats, whatever you want to call them, uh, have got their policies. As you say, they’re harming this country. Can you tell what those are? I am actually very curious as to what those liberal policies are that are harming our country. So if anyone, anyone out there watching this, if you just give me a list of liberal policies and how they harm America, like there has to be a material harm. It can’t just be because it hurts your feelings. Okay. You got gave me real example where it caused actual harm to the country. Do that.

I’ll just sit here and wait. Cause I know you can’t. Meanwhile, we have a Republican running the country right now. We’re we’re having 4,000 people die a day of COVID-19 that’s one in one third, nine, 11 every day folks. And nine 11 changed the way we think about air travel. Nine 11 changed the way we think about national security. Nine 11 changed the way we think those of us who lived through that day and yet thousand dying a day from a pandemic. And we barely even shrug. Most people aren’t even paying attention anymore. Huh? That’s Republicans, by the way. Boebert that brought us that, Hey, they also were in charge on nine 11 too. Wow. Wow. Lots of tragedies with Republicans. Sure. But it’s the liberals and it’s the Hollywood types causing the most harm. Sure, sure. Um, if you haven’t had a cat scan recently, Boebert, I’d go ahead and uh, maybe hop on the horn and make that call because as a, yeah, something’s not right up here.