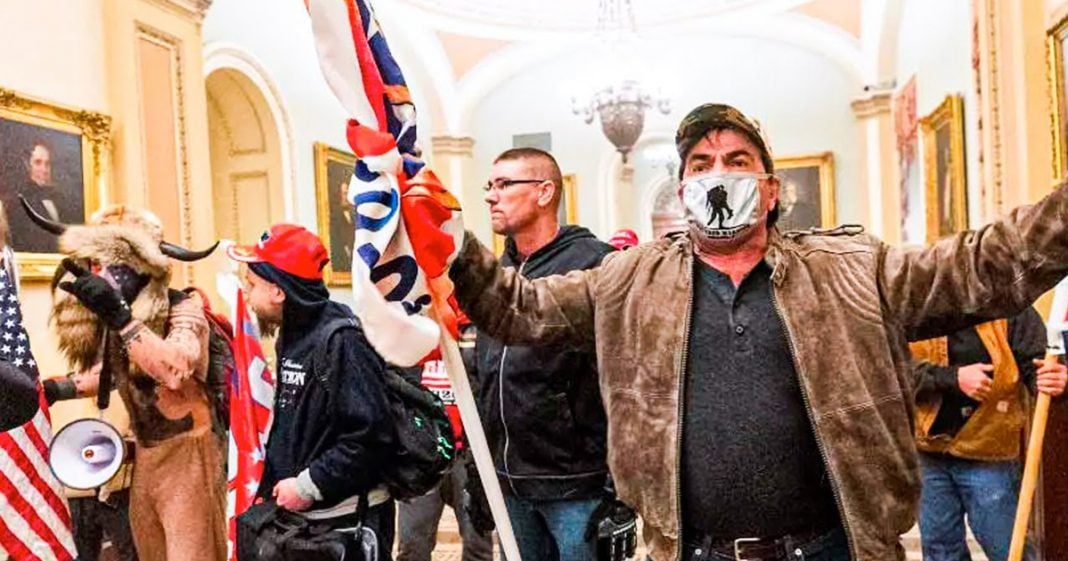 Police ignored the warnings about violence on the Capitol on January 6th, so hopefully they are taking the new threats of violence seriously. According to law enforcement agencies, Trump supporters are planning violence across the country on inauguration day, and possibly even prior to it, to show their disdain for Joe Biden and their anger over Donald Trump’s loss. Ring of Fire’s Farron Cousins explains what is happening and why these same officers who failed on the 6th can’t fail us again.

Right now all week, actually we have seen reports coming out from law enforcement agencies, uh, from the Capitol Hill police Democrats were briefed on Monday. The FBI has been warning. What we know is that basically for the next few days, all the way through January 20th, uh, we don’t know what’s going to happen beyond that point, but at least up till then, crazed right-wingers are planning violent protests across the country. In fact, we have now been warned that every state Capitol, all 50 state capitals can expect some kind of right-wing gathering, uh, to take place to protest Joe Biden’s inauguration. Um, again, these are crazed Trump supporters. This is what they’re doing. They’re angry that their guy lost. So they’re throwing these temper tantrums. And the scary thing is we saw what happened with their temper tantrum last week, their temper tantrum resulted in five people die. Their temper tantrum resulted in the security measures that I’m actually quite shocked. To be honest with you, weren’t already in place at the Capitol. Let’s be honest that probably something you should have done a long time ago. Uh, but new safety measures at the Capitol. It’s an event that is going to be discussed in history books forever. Like that’s a thing. Now this is a part of American history. We just lived through another event.

Will the police take these threats? Seriously? They dropped the ball. That’s putting it so very mildly, uh, with all of the advanced warnings they had about what was going to happen on January 6th. They knew they knew where it was going to be. They knew what it was going to be. They knew who the organizers were. They knew who the dangerous people were, who were going to be there. They did nothing. They knew all of that. They had all the information. What did they do? Instead? They sent cops home early. They laid down and they let them do it. But now, now that we know that now that we know they were essentially complicit in those actions, now that we have been talking about it, relentlessly all of the media has they understand they have to act. You have the warnings, you have the officers. And I’m sure plenty of those officers would rather be over on the other side with the protestors, but that’s not their job, these protests when they happen.

And they will, I may not be to the degree that they’re saying, it’s probably not going to be all 50 state capitals. You know, I just kind of find it hard to believe that people in Alaska are going to be protesting or even Hawaii. Hell even Wyoming and North Dakota. It’s a little chilly up there. Probably not going to be a big protest there, but, uh, Florida. Sure, absolutely Georgia. That’s a scary one. Not to mention Washington DC. That’s obviously going to be the big one. The officers need to be ready. The national guard needs to be ready. The FBI needs to be ready and you need to be ready to just contain these people. You don’t need to be ready to fire bullets. You don’t need to be ready to tear gas. Some, you just need to be ready to make sure that the protests stay peaceful, that nobody gets hurt on your side or their side. Actually, that’s your job. That’s what you do. You do that. We don’t have problems. These people have every right to go out there and protest. Like there is no question about that. And as long as you can keep them to just protesting cool, let their voice be heard. Absolutely. But you better do everything you have or do everything possible. Excuse me. Use every trick. You have to make sure these individuals don’t try to pull a stunt. Like what happened last week? Again? That’s on you. The warnings are out there. They’ve been coming all week. The question is, are they actually gonna listen this time?