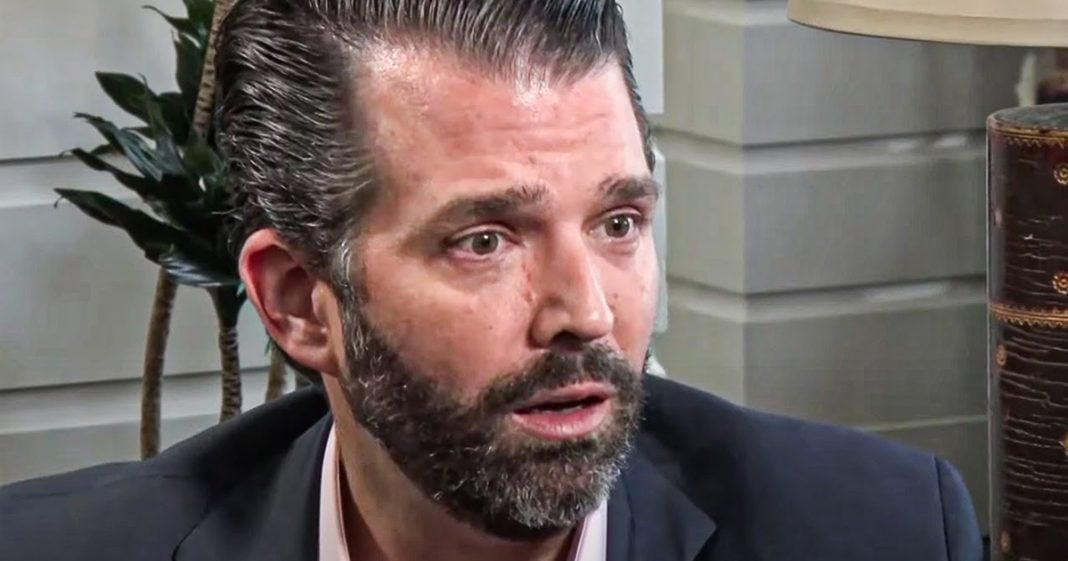 Donald Trump, Jr. is now being targeted by the Washington, D.C. attorney general as part of the ongoing investigation into the possible misuse of inaugural funds from his father’s inauguration. This investigation has been going on for years, and it has already roped in Ivanka and one of Melania’s former disgruntled assistants. Ring of Fire’s Farron Cousins explains what’s happening with the investigation.

Carl Racine the attorney general for the district of Columbia is requesting the presence of Donald J. Trump Jr. To come and sit and have a talk with him. And the other investigators who are looking into the potential misuse of inaugural funds, uh, for Donald Trump’s inauguration, that took place in January of 2017. Yes. Even though it’s been four years since that scandal happened, the investigation is still ongoing and believe it or not in recent weeks, it’s actually kind of picked up steam a little bit. Ivanka Trump was called to testify or give her story or make a statement or whatever it was not that long ago. And now after Ivanka spoke, they say, okay, how about Jr? How about you come in here? And, uh, you have a little chat with us, huh? This is, uh, this is getting interesting, uh, backtrack a little bit here for those who aren’t familiar with the scandal.

Again, it was like one of the first ones they ever did. Uh, the Trump inaugural committee ends up spending millions and raising millions and millions and then spending millions of millions. And a lot of it was spent at Trump’s DC hotel and based on their own records, it looks a lot like they overcharged it so that they could put more of the money in their pockets. You had other people that were with the Trump organization, I guess you would say the Trump family or, uh, you know, just good friends of them, contractors with the campaign, whatever it is. They all seem to be getting very large sums of money for services. Uh, yeah, a lot of money going out for a lot of reasons that can’t fully be justified is what it looks like. Um, and so that’s what investigators were trying to find out.

Did you overcharge the inaugural committee for the use of a ballroom? Well, okay. Cause this is what you usually charge for the ballroom, and this is what you charged the inaugural committee late. Those are things that are very easy to prove, and those are things that did in fact happen. Here’s the thing though, if they’re calling Trump Jr. In, after they have already called Ivanka in to testify what this could possibly mean. Cause this is something that typically happens in these scenarios is we want to square up what he said versus what she said. Is there any discrepancy? Because if there is, we call the other one back and then we say, okay, let me ask you something here. You said this, but we have it on good authority that this, I hope that makes sense. You know, I’m not trying to put words in either person’s mouth obviously, but calling in the different individuals to testify separately.

A lot of times what they’re doing is they’re trying to play one against the other, without them knowing about it or, uh, possibly trying to get somebody, uh, you know, lying to the investigators or maybe Ivanka implicated Don Jr. Maybe she said, Hey, I don’t know about this, Don Jr. Was the one in charge of it. So they said, okay, we’ll talk to him. Could it be any one of those things we’ll find out, it’ll all come out in the wash. It’ll all come out. If there is, uh, uh, any charges that come out of this. But again, this is an investigation that has been going on for, you know, almost four years at this point. So time to put up or shut up, basically it shouldn’t take this long. Maybe they were waiting for Trump to be out of office, who knows at this point, but come on, we we’ve all been watching these investigations, the one in New York for forever, the one in DC. Now all of this come on. It’s time for the season finale, right? It’s time for the big climax of all these cases. Stop leaving us hanging. Tell us what the hell you got so that we can either convict him or move on, but at least be done with the Trump family saga for good.