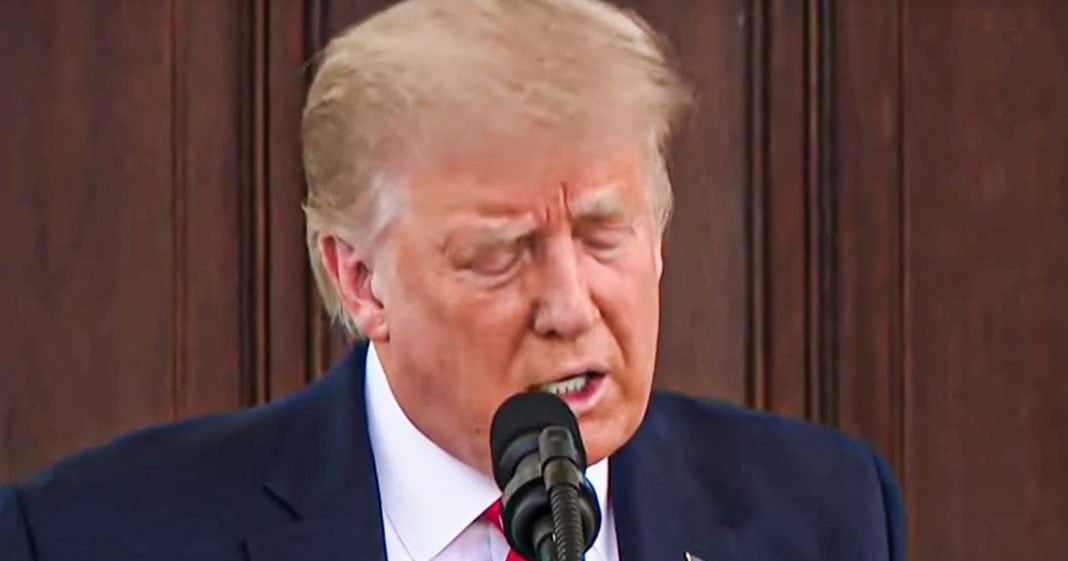 Donald Trump won’t be able to escape the upcoming impeachment trial in the Senate, and since he won’t be president anymore, he can’t use his thugs at the DOJ to represent him. He also can’t use Rudy because the two aren’t getting along at the moment, and no one else appears to be willing to take the case. Ring of Fire’s Farron Cousins explains what’s happening.

Mitch McConnell might be able to delay the start of the impeachment trial until after Donald Trump is no longer president, but he cannot just not have the trial. So we will still be having an impeachment trial. It’ll just be after Donald Trump is no longer the president. So there’s going to be a little bit of a weird situation there, but not as weird as the fact that Donald Trump can’t find a single lawyer at this moment, willing to represent him in that trial. Now let’s rewind about a year or so. Remember the last trial Donald Trump was able to have, you know, his, his white house counsel, Rudy Giuliani, uh, Alan Dershowitz, all those guys up in there, all the heavy hitters. You know, he had everybody, it is disposal. Uh, now he has nothing and he has no one Rudy Giuliani can’t do it because the two are having a falling out because Donald Trump refuses to pay his legal bills. You know, the legal fees that he owes Giuliani for whatever the hell it is. Giuliani has been doing the last two months. He’s not paying him. So Giuliani’s out. Donald Trump was no longer going to be president. So there’s no white house counsel or even a DOJ to back him up. So he doesn’t have access to all the in-house people. Uh, his other lawyer is still technically in jail.

No he’s released for COVID and all that, but, uh, still basically in jail. Uh, so no secular, no Pat Cipollini other lawyers who have refused. I include Pam Bondi, the former attorney general, Florida, who was a staunch supporter of Trump. She has said, No, Eric Hirschman, Pat Philbin and Mark castle. [inaudible] all of these have Klein to join Donald Trump’s legal team. Now Dershowitz named Is not there. Dershowitz might maybe Still be an option for Donald Trump. I don’t know. Uh, because this isn’t like last time, last time you had a lot of Republicans who were able to say, Oh, this is trumped up charges, no pun intended, you know, with the Ukraine call, there was nothing wrong with it. You can’t prove a quid pro quo, blah, blah, blah. This one’s a little bit different because we all saw what happened as a result of Donald Trump’s words and actions over the past two months, A bunch of right Wing, uh, psychotic Trump cult Attack the Capitol. Yeah. Uh, can’t really get around that. So it’s good. It’d be hard for any of these lawyers to really go out there and try to, uh, not even try to defend them because obviously there’s ways to defend everything. You know, just legally speaking, everybody is entitled to a good legal defense, But who’s Willing to put their entire reputation on the line During this impeachment trial. Oh, I’m sure he’ll find somebody. Sure, absolutely.

The question is who, cause it’s not Going to be somebody from a top tier law. He already burned all those bridges during his election challenges. You know, we talked relentlessly about the fact that these major law firms that were representing him in the early days, uh, after about a week or so they all said, Nope, cut me out of this. I don’t want to be associated with it. Uh, it’s hurting my reputation with my clients. I’ve got staffers that are saying, they’re going to quit. Good lawyers saying, they’re going to leave if we don’t drop you so goodbye. So those lawyers have already made their decision about Trump and they made it long before the impeachment was even a thing. There’s nobody left again. Except of course Dershowitz. Cause we don’t know if he has said yes or no if he’s even been approached. Uh, but I would imagine even He wouldn’t be willing to stick his neck out in this manner, especially considering, you know, he’s got his own, uh, stuff to fight right now. So we’ll see somebody And he’s going to step up to the plate and take a swing at it for Trump Just may not be anybody from, uh, you know, the team here might be looking at third or fourth string at this point and that it’s going to be pretty fun to watch.