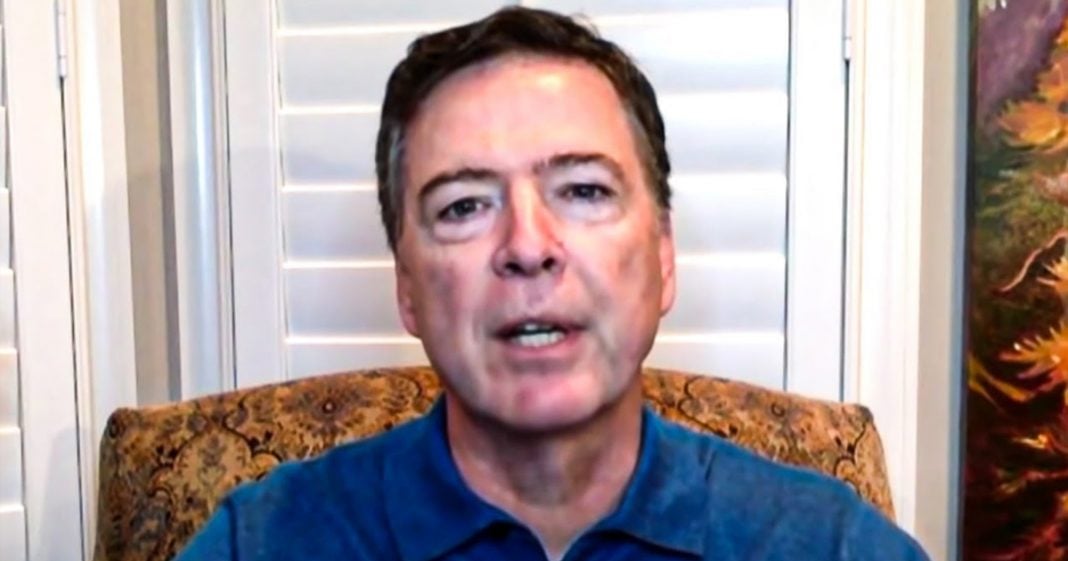 James Comey has reemerged from retirement to give one of the worst possible takes on the current state of affairs in America. Comey said this week that Joe Biden should actually pardon Donald Trump in an effort to promote unity and move the country forward. That’s not what would happen, but it is nice to see that Comey is just as spineless and stupid as he ever was. Ring of Fire’s Farron Cousins discusses this.

Former FBI director, James Comey appeared on BBC news night earlier this week and said something that was completely idiotic. James Comey said that Joe Biden should consider pardoning Donald Trump rather than prosecuting him. He should pardon him. And Cami’s reason for this is just as idiotic as his idea to say that statement out loud that he should be pardoned. Uh, his reasoning is because of course, as we all know, the Supreme court has said that accepting a pardon is tantamount to admitting guilt. So you’re no longer protected under the fifth amendment. So James Comey, you might think based on him saying that in the interview. Cause he did mention that you may think, aha James Comey is playing three dimensional chess here, a high C good on you. Comi no folks. That’s actually not what he’s doing because then he kept talking and here’s what he said. Uh, Trump does belong in jail, but I think the wiser decision would be not to pursue him, but whatever you do, the next president, Joe Biden should explain it to the American people. Be transparent about why you’re doing what you’re doing. So he says a high, if he accepts the partum, then it’s a gotcha moment. Moment. I want him in jail. I also think we should just drop it right now and not do anything else. That’s it stop.

Um, are you okay, Jim? You okay, because that seems a little, um, seems like you don’t know which way your mind’s going on that you know that that could actually be a symptom of something, to be honest with you. Um, here’s the thing Biden should pursue prosecution of Donald J. Trump. Absolutely. 100% without a question should do it. Why? Oh, not because it sets a good precedent of, Hey, we can no, no, no, no, no. All that screw it. Donald Trump likely committed a crime crimes should be investigated. End of story. Period. Can we stop acting like anybody in this country is above the law? I don’t care if you’re the CEO of a bank. I don’t care if you’re the president of the United States. I don’t care if you’re just the average working class American, we all play by the same set of rules or we’re supposed to.

The problem is we actually don’t that working class person that commits a crime, no matter how minor it may be. They’re the ones who are going to pay the ultimate price for it. The, that bank CEO, you know, that commits all these crimes. The, the racial discrimination that we have seen so much in the bank, uh, banks, the, the red lining, the mortgage fraud, all of that robo signing. Sure. They’ll pay a little, a little bit in fines. They’ll then write all those fines off and they’ll go back to their job. The precedents that we see break the law. Nah, nothing happens to them ever, ever.

It’s always people like us. We don’t get away with anything. Everybody else does. That is why the prosecution would be so important. Not because it sends a message to his supporters that they backed the wrong horse. Not because it’s left versus right, but because it’s the right thing to do. It’s because that’s what this country’s supposed to be founded on the rule of law. Right. You know, good. You’ve got a nice, good free country. Just, you know, here’s your list of things to not do you follow this list? You’re going to enjoy it here. It’s going to be great. Yeah. We’re the only ones that have to follow that list. Everybody else, the ones at the top. Now they’re the ones who make the list and they’re the ones who make the exceptions and they made sure to give themselves those exceptions. Nobody should listen to Jim Comey ever.

Um, I think that’s probably good advice to live by. And it’s sickening that this guy is sitting here saying, he says like, well for the country, we need to move forward. Dude. Trump spent four years dragging you through the mud. And here you are pulling a Ted Cruz kissing up to this guy who actually hates you. Like full-on legitimately hates you. And you’re like, no, I don’t think he should actually. I want him to go to jail, but I don’t think he should grow a pair of gym. You were the director of the FBI. I would expect you, you know, to have a little bit more of a backbone than that. But I guess I was wrong.