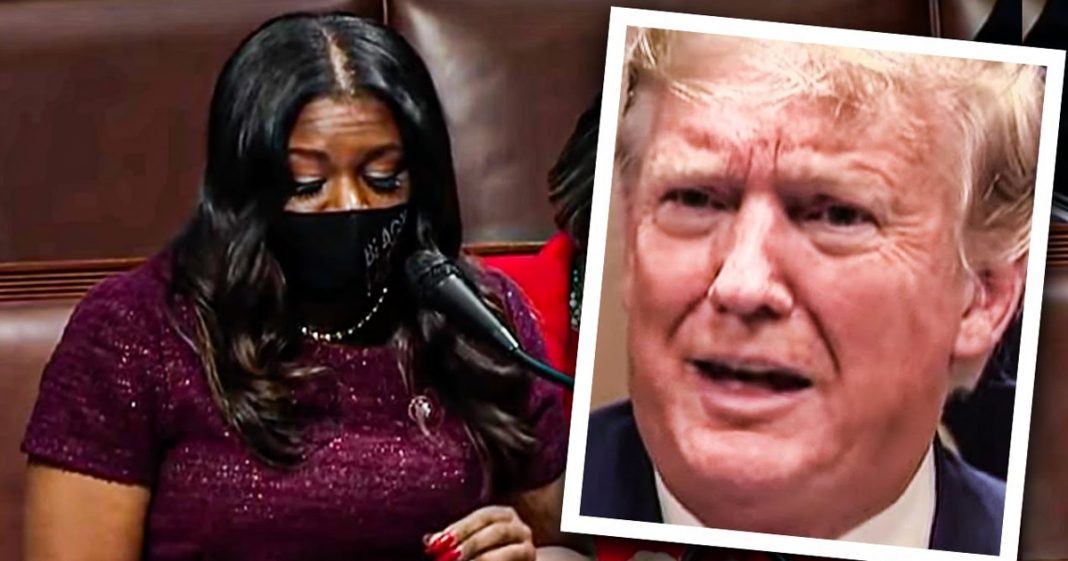 Representative Cori Bush, one of the newest members of “The Squad”, used her time during Wednesday’s impeachment hearing to voice her concerns and thoughts about Donald Trump, specifically labeling him a white supremacist during her speech. These words are now a part of the Congressional record, and they will live for the rest of American history. Ring of Fire’s Farron Cousins discusses this.

Yesterday, during the impeachment hearing for Donald J. Trump in the house of representatives, representative, Cory Bush used her brief speaking time to light up the president and to call him what he truly is. Here’s her statement St. Louis and I rise in support of the article of impeachment against Donald J. Trump. If we fail to remove a white supremacist president who incited a white supremacist insurrection it’s communities, like Missouri’s first district that suffer the most on the house floor. During the impeachment hearing into the congressional record, the newest member of the squad representative, Cory Bush called Donald Trump a white supremacist, and that needed to happen that absolutely 100% in my opinion needed to happen. It needs to be in the congressional record. It needs to be a part of this impeachment hearing of the impeachment vote of the impeachment story that will inevitably be in history books. That statement needs to be there. Bush has been very outspoken, obviously about the insurrection that happened last week, uh, correctly pointing out that had it been people who looked like her as she put it, uh, meaning black people, instead of all the white people, body count would have been obviously much, much higher, um, much, much higher, uh, cause we’ve seen that play itself out. So yeah, this was a white supremacist insurrectionist she said, and you can’t even deny that I, you had the one guy wearing the camp, Auschwitz shirt, others carrying the Confederate flag bag.

Those are race assembles others with white supremacy tattoos, visible. There is no denying what this was. And if you want to quibble about what, I don’t know who Donald Trump’s wives were Brumas was. Okay. Well, white supremacists. Sure. Seem to think he’s a white supremacist. I personally believe that. Yes, Donald Trump, I obviously has a lot of these hostilities towards people of color, but it also stems from economic, um, discrimination against people. He believes in general, blacks are poor and not as good, obviously genetically as him and those two things combined are why he doesn’t like them. Why he refers to them as countries, uh, you know, and things like that. But I think a lot of it has to do economics as much as it does color of their skin. Uh, so that’s where I think he comes from on that. But yes, that those are elements obviously of white supremacy, but Cory Bush, after she finishes her statement, she yields her time back. She goes and sits down. And then there’s booze booze coming from the Republican side, BU Cory Bush, BU calling the president and his insurrection white supremacy.

You know, I really wish I had the name of every single person who booed that statement. Cause I would absolutely name them all, every one of them right here, because I think those names should also be on the record. I think we should know which individuals are so blind to reality that they don’t see what’s actually happening. And haven’t seen what’s happened for the last four years. If you deny the racism that we have seen coming out of this administration, you’re denying reality itself. And there’s no other explanation. You either open your eyes and you see what has happened. You see what this man has done to people of color, not just in the United States, but all over the world, travel bans, more cages down there at the Southern border. Yeah. Folks. Those are, those are forms of racism. Yeah. They really are. And this man did those things. So yeah, again, you can boo it all you want, but that doesn’t make it any less true.